From the world’s richest football club to debts the size of a football field, Man U is in serious disarray. 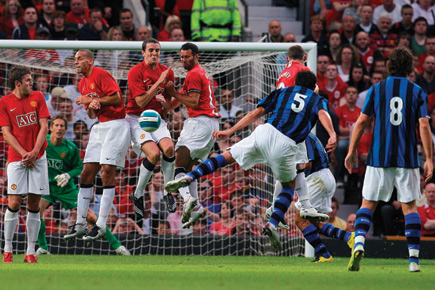 From the world’s richest football club to debts the size of a football field, Man U is in serious disarray.


Is this the beginning of the end for Manchester United? If you directed this question a few months ago, for instance, at people on Chester Street, a curling freekick away from the club’s home Old Trafford, you’d have been the proud owner of English football memorabilia in the form of a black eye. But today, even season ticket-carrying citizens of the Republic of Mancunia may grudgingly admit it’s a possibility.

Manchester United, reigning champions of the English Premier League, the most storied, decorated and followed football club in England, and around the world, finds itself in an unlikely financial mess that’s chipping away at its 132-year-old foundations. The club has won the league a record 18 times, and is perched on top of the EPL table, albeit precariously, at the time of writing; it has produced superstars such as George Best (called the fifth Beatle), and David Beckham, the most saleable footballer in the world even today; its £280 million revenues in 2009 was the highest for an English club by some distance; its 75,000 capacity stadium is the biggest for a football club in the country and is sold out on most match days; not to forget the 350 million-odd people around the globe who call themselves fans. But unfortunately for the club, the predominant colour of ink on its balance sheet is the same as its iconic jersey.

The financial woes for the club began when Florida-based American sport entrepreneur Malcolm Glazer assumed ownership in 2005 after a leveraged buyout. Glazer pledged the club and its assets to hedge funds and financial institutions to raise money to buy it, saddling the club with debts to the tune of £716 million with an interest of around 14 per cent. Financial analysts and fans fear that club manager Sir Alex Ferguson will be unable to buy star players he wants in order to retain Manchester United’s supremacy. Though the club sold the talismanic Portuguese player Cristiano Ronaldo to Real Madrid last summer for a record transfer fee of £81 million, the mountain of debt meant he couldn’t dip into the windfall. Unable to find a replacement for Ronaldo, Ferguson’s team have been mediocre this season. They’ve lost five games already, with half a season to go. Last year, they lost only four times throughout the EPL campaign.

The Glazers refinanced the debt structure last week raising nearly £500 million by issuing high-risk, unrated 7-year bonds known as junk bonds to investors around the world to pay off the high interest charging hedge funds. Man U will pay about 9 per cent interest to its bond subscribers.
As it is, Manchester United’s fans are ill at ease with American owners who are perceived to be passionless shysters out to make a quick buck. The financial jugglery has enraged them further. Manchester United Supporters Trust (Must), a 40,000-strong grouping of the club’s members, has been Glazers’ most trenchant critic, eager to show them the red card. It recently even asked manager Ferguson to step down in protest.

“Manchester United went from being the richest club in the world with absolutely no debt to the most debt-ridden club in the world. The debt currently stands at over £700 million. The Glazers have continually increased ticket prices making it unaffordable for many ordinary fans to go to home games at Old Trafford. They are expecting the ordinary fan to bail them out and pay for the debt they used to purchase the club while taking millions out for themselves,” says Richard Bruce, a Must committee member. Others are even more scathing. “The latest trading statement would have shown a substantial loss were it not for the sale of Ronaldo. We need to be rid of these leeches,” says Duncan Drasdo, Must’s CEO.

In five years, ticket prices at Old Trafford have risen nearly 70 per cent. This, during a recession when all other major clubs have frozen or cut prices. Some supporters are even calling for state intervention, something beyond the realm of possibility. Nevertheless, it didn’t stop constitutional affairs minister Harriet Harman from saying on BBC’s Question Time, “Manchester United is very important to English football and the government is keeping a close eye on the situation.”

The Glazers entered the scene when the EPL was becoming a playground for billionaires. Russian oligarchs, arms dealers, exiled heads of state and oil-rich sheikhs all wanted a slice of English football and the astronomical TV revenues. Unlike its cricket clone IPL, EPL owners got tangible assets like prime real estate in the form of stadia in the heart of London, Birmingham and Manchester. Today, the most popular English football clubs such as Arsenal, Chelsea, Liverpool and Manchester United have non-UK owners.

Nobody expected the Glazers to compete with the sheikhs’ petrodollars, but what they can’t stand is the brazen asset stripping of a proud club. “The Glazers have generated enormous bad feeling by plunging the club into debt. Their business plan was always high-risk but the financial downturn has caught them out. In time, they will sell the club at a profit, but steering United through the next couple of years will be the decisive part. If United miss out on Champions League qualification, they could struggle to even meet interest payments,” says Mark Ogden, football correspondent for The Daily Telegraph.

The Red Devils could clearly do with some black.