How Srinagar Played the Semis

On Wednesday morning there is good news and bad news in Srinagar. Late evening, you’d think all bad 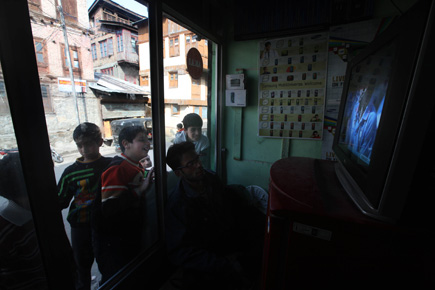 On Wednesday morning there is good news and bad news in Srinagar. Late evening, you’d think all bad


On Wednesday morning there is good news and bad news in Srinagar. Late evening, you’d think all bad

On Wednesday morning there is good news and bad news in Srinagar. The bad news is that Section 144 has been imposed: four or more people cannot watch television together on a footpath, say in front of one of the showrooms around Lal Chowk.

The good news is that the administration has “highly recommended that (the) power department should ensure hassle-free electricity to Srinagar, especially downtown city, so that people remain indoors”, according to Greater Kashmir.

Downtown is the place where adolescents throw stones, though not generally because of the power situation. Downtown is where outcomes are uncertain. Some people say there will be a spot of pelting if Pakistan loses; some people say this will happen in case they win.

I had gone to Srinagar to watch a cricket match that wasn’t being played there. The World Cup semi-final was in Mohali, of course, two Prime Ministers and at least one prime mover attended. Anti-aircraft guns were in readiness.
But in Srinagar, the question was: what if stones are thrown?

You only know when you are there, so through half deserted streets, passing miles of coiled barb wire, I got myself to the Nawabazar area. Not quite downtown, but home to feisty little armies of stone-pelters nevertheless.

I squeezed into Tasaduq Electronics at the warm insistence of the owner and his friends. Tasaduq Zargar’s shop repairs anything that has the capacity to deliver an electric shock.

It is an 8′ x 15′ space with dusty motherboards lying on a shelf at the end. They lean on each other the way tired books do on an unattended rack. There are wires, screwdrivers, dead TVs, and a man bent over working on a set that is hopelessly late for the semi-final. About ten others are there to watch the game.

There are two TV sets on: a little one mid-store for internal consumption, and a full 21-incher for the public. The second is mounted with ingenuity to face the road, on a maroon refrigerator brought in for repairs. This is the TV meant for the curfew breakers.

In the beginning, there aren’t that many. “They will come the moment the power goes—we have an inverter”, chuckles one of Zargar’s friends. The power goes for six hours or ten, no one is quite sure. It is supposed to go at 1 and come back at five, but today it is three thirty and the lights are working.

To the eyes in the shop, India is scratchy, but unsettlingly steady, possibly headed for a 300-plus score. Long odds are being offered: “If Pakistan wins, Ghantaghar (the iconic clock tower in the centre of town) is mine!”

The power goes off. People pour out of hidden lanes, run to the shopfront, just in time for a wonderful two balls from the left-armer Wahab Riaz. Kohli and Yuvraj are out. Firecrackers, procured subversively and damp from the bleakness of the past few days, come out. Some burst, some don’t.

But the mood has lifted enough for Zargar to ask a question that I might have asked him (but didn’t need to). He senses that I find the timing of the celebrations a little off, that I am used to silences after two Indian wickets in successive balls. ‘Dil se kisko support karte ho?’ I drop the neutral platitudes and say “India”. I turn now to his friend to ask if he now has any takers for the Ghantaghar bet. Everyone laughs.

In another part of Nawabazar, a cable operator has mounted a TV set on a car outside his shop. A bunch of happy curfew breakers are there as well. At the head of the lane there’s a clever piece of graffiti: “Go, India go”. I say clever because the writing isn’t always that smart in Srinagar. One CRPF camp sign near the Sher-e-Kashmir stadium actually tells citizens: “Don’t act funny…”

By nine in the evening, it is clear that India is ‘going’—to the World Cup finals, that is. In a houseboat on Dal Lake, with Tariq and Raees for company, I watch Manmohan Singh, Yousuf Raza Gilani next to him, usher an Indian win with awkward applause. I understand his situation. I am quiet. Srinagar falls silent. No one acts “funny”.