While we bring out the sweets and the crackers, these champion athletes are sweating it out at training and passing up the goodies with steely resolve 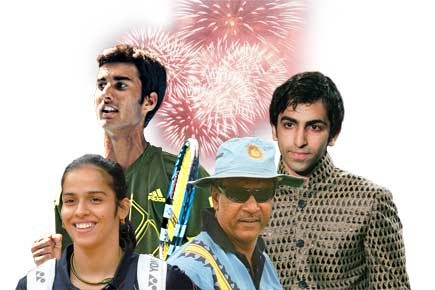 While we bring out the sweets and the crackers, these champion athletes are sweating it out at training


Daley Thompson versus Jurgen Hingsen. One of the most captivating rivalries in sports history. They were decathletes. Hingsen, a six foot six inch German with blonde hair, was the epitome of an Olympian, his physical superiority striking and apparent. Thompson, at six feet one, was not short. But in comparison to Hingsen, he looked average. Besides, he was Black. The American president of the time was Reagan, not Obama. Black meant disadvantages.

But who won their duels? Thompson. The Briton won two Olympic golds, in Moscow 1980 and Los Angeles 1984, and took home gold at the Helsinki World Championships in 1983 as well.

Why did he win? He had a natural cockiness. On the Los Angeles podium, he whistled the tune of God Save the Queen, the British national anthem. Then, there’s the famous second reason: Thompson trained even on Christmas.

To the committed athlete, a festival is a day like any, except one on which people wear new clothes and stand in the balcony looking happy with themselves. Later, they eat rich food. It’s not that the athlete is not tempted, but he can indulge only to an extent. And if the call of duty is imminent, he can’t do it at all.

Saina Nehwal, world No 8 in badminton, likes Diwali. A large part of her day is spent indoors at the P Gopichand academy in Hyderabad, with no time to notice the changes in the air that herald the festive season. But she gets wind of it from her parents and through newspaper advertisements. The fireworks scare her now but for five years, from 1994 to 1999, she lit them in the courtyard of her house. The 19-year-old remembers with fondness “a small pooja with my parents, some lights and lots of candles. Symbolic sweets.” But this year, she will not get a chance to participate in the merry-making. Saina will be training. “I’m playing the Denmark Open which is being held around the time of Diwali,” she says.

The worst affected, if they can be called that, are the cricketers. Their season starts in October. At a time when others loosen their necktie, as it were, and inhale the festive mood, cricketers have to get down to business. The Diwali season abounds with domestic and international fixtures. This is a deliberate move in part because India’s masses, hooked to the game as it is, embrace it with even greater euphoria during Diwali. But it leaves little scope for active players to enjoy the festival.

Anshuman Gaekwad, who was the manager of the Indian team during the late 90s, says, “There were occasions when we had big games during Diwali. Wishes would go around the dressing room but we would keep it down. We were too busy with the matches.”

Pankaj Advani, recently crowned the world professional billiards champion, is fortunate. He is not always in competition during the festival.  “I avoid training on Diwali. My family is my priority on occasions like these. But if there is an upcoming tournament, I train for a couple of hours,” Advani says.  He loves the festival. “I am as enthusiastic as a 12-year-old. The festive mood is contagious.  Usually, I follow a low-calorie diet. But during Diwali, I have laddoos and jalebis.”

Sportsmen are frequent travellers and often find themselves celebrating Diwali on foreign land. Or, water. Yuki Bhambri, who won the junior Australian Open tennis tournament this year, spent last Diwali with friends on a big boat off the Florida coast. “We could not burst crackers, but ate a nice dinner and played cards—Texas Hold’em poker, my favourite card game.” Yuki is blessed because he is required to eat a lot. “I need to add bulk, so I can have as much Diwali food as I want,” he says.

Where sportsmen go is not in their hands. And not all places are as easy on the soul, or worth putting up on Facebook, as the Florida waters. Some destinations are hostile. One such place is where Ian Botham said he would send his mother-in-law. But Pakistan is a land with the Gemini trait of being two-faced, unsavoury yet generous.

“There were a lot of restrictions on us when we toured Pakistan in 1978,” Anshuman Gaekwad says, “We were mostly indoors. But during Diwali, people who had been living there since before Partition brought sweets for us.”