The talented but controversial Subrata Paul redeemed himself in the Nehru Cup. Now, he must play for an overseas club to raise the bar higher 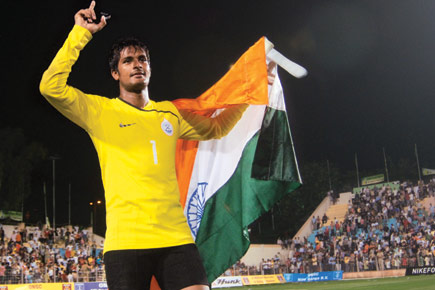 Subrata Paul redeemed himself in the Nehru Cup, but must now play for an overseas club to raise the bar


Goalkeepers can go from immortality to infamy in the time that it takes a ball to spill out of their grasp. They can also traverse the distance from zero to hero in the couple of seconds that it takes for a penalty kick. After his heroics in the Nehru Cup final, Subrata Paul could vouch for that.

Paul wasn’t even born when the legendary Luis Arconada let a Michel Platini free-kick wriggle under his body during the final of Euro ’84, the gaffe that seemed to epitomise Spain’s wretched luck in major competitions until they found redemption at Euro 2008. He is, however, old enough to remember Oliver Kahn, who made some tremendous saves to keep Germany in the 2002 World Cup final before fumbling a Rivaldo drive straight into Ronaldo’s path.

In that split-second, the legacy that a man leaves behind can change. Paul was not even 18 when, playing for Mohun Bagan, he went for an overzealous challenge against Cristiano Junior of Dempo in the 2004 Federation Cup final. Though it was later established that Junior died of a cardiac arrest, like Marc-Vivien Foe before him and Dani Jarque earlier this year, the criticism that Paul received was vicious. There was also a two-month suspension.

The insinuation that they were responsible for the death of a fellow professional would break most men, leave alone an 18-year-old. For Paul, though, his nightmare was just beginning. Junior’s death was just receding into the distance when Amal Dutta, the Bagan coach, accused him of having taken back-handers to perform poorly in a derby game against East Bengal.

Through it all, Paul’s greatest ally was his mental strength. That came to the fore on the big occasions, in the games that mark a player as special. In the 2006 Federation Cup final, he saved three penalties as Bagan prevailed in a shootout, and a few months later, he replaced Sandip Nandy as goalie as India sought to win the Nehru Cup for the first time.

His shot-stopping ability caught the eye in the semi-final victory over Kyrgyzstan, and it was his command of the area that was instrumental in Syria being thwarted in the final. The Syrians battered the Indian goalmouth, but with his defenders also resolute, Paul had an imperious afternoon, blocking shots and smothering dangerous crosses to ensure a first trophy in a generation.

His recent heroics caused quite a stir back in Kolkata, as many noted the stark contrast with his club form. In several games for East Bengal last season, he looked decidedly shaky, with his handling unsure and decision-making questionable. After a disastrous I-League campaign, East Bengal released him, and he will start the next domestic season playing for newly promoted Pune FC. Like Gordon Banks, who spent most of his career with unfashionable Leicester and Stoke, Paul will hope that the “step down” from the Kolkata giants doesn’t hamper his international ambitions.

After his inability to cement a place at either Bagan or East Bengal, he was in danger of being labelled another Atanu Bhattacharya, outstanding in national colours (an Asian all-star, no less) and inconsistent at club level. Debashis Mukherjee, his coach, insists though that the Kolkata clubs have been too hasty in writing his ward off. “There has been too much impatience,” he says. “Subrata was never allowed to settle, and too many were too quick to say that he can’t cope with the pressure of club football.”

Much of the credit for Paul’s transformation from bad boy to indispensable hero has to go to Bob Houghton, the English coach of the Indian team who has believed in him like no one else has. Paul acknowledges as much. “Bob Houghton resurrected my career,” he says. Under Houghton’s guidance, the 6´2" Paul has transformed himself into one of the first names on the team sheet.

But there’s more to goalkeeping than just saving penalties. Sergio Goycochea did that splendidly while deputising for Neri Pumpido at Italia ’90, but only a fool would say that he was better than the magnificent Walter Zenga of Italy. Likewise, Jerzy Dudek’s Istanbul heroics didn’t prevent Rafael Benitez from signing Pepe Reina, another with great penalty-saving pedigree, to take Liverpool’s No. 1 jersey.

Paul has the tools to succeed. He has excellent reflexes and is brave enough to throw himself at crosses. He has the potential to be the greatest Indian goalkeeper since Peter Thangaraj, once voted the best in Asia. For that to happen, though, he needs to leave the comfort zone. There is talk of exploring a move to either Japan (fanciful) or West Asia (more likely), and for his sake, things need to work out. There simply isn’t enough talent in the I-League to expand his repertoire, and a stint in Qatar, the UAE or Saudi Arabia will do him a power of good.

Houghton, who has coached in the region, has said that the football there is “light years ahead”, and more of his players need to nurse the ambition to go abroad. For the moment, Paul and his family in Sodepur can bask in the acclaim. The bigger tests, like the Asian Cup in 2011 and the chimera that is World Cup qualification, lie in the future.

Given the safe hands that he has shown in India colours, millions that follow the beautiful game in this country will hope that he grasps his opportunities with both hands. Kahn and Arconada still wish that they had.