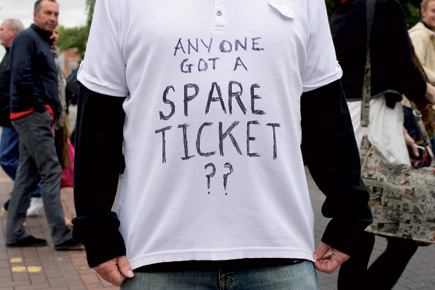 
The kick-off time is 8.45 pm, but Amin Rahim has arrived at the Porte de Saint-Cloud metro station, near the Parc des Princes stadium, three hours in advance. He doesn’t mind braving the chilly weather. He has a mission to accomplish. Rahim, who is in his mid-20s, and is of average build with a boyish face and wavy hair, wants to get a ticket for a football game. Not any football game, but one regarded as the biggest club match in Paris—the Champions League quarter-final (first leg) between Paris Saint-Germain and Barcelona.

Rahim, a Portuguese of Indian descent, knows that getting a ticket at the last moment, and at an affordable price, isn’t going to be easy. His budget is €80 (nearly Rs 5,600). This is ridiculously low. Just a few days ago, tickets were selling online for as high as €1,000. The demand is unprecedented. According to some reports, one million people want tickets for the game, which is to be held in a 45,000- capacity stadium. Many of the seats will be reserved for club members, officials, sponsors and travelling Barcelona fans. The number of tickets on sale are far fewer than 45,000.

But faith (and some haggling) can accomplish amazing things.

Around the metro station, Rahim’s eyes scan the scene for a tout. Fifteen minutes after arriving, he finds one. The tout, who is wearing a track suit and a sleeveless doudoune (a trendy jacket in France), looks as if he is barely out of his teens. Compared to his peers, he seems like he could be a bit more reasonable about doing business.

“How much for one ticket?” Rahim asks, rubbing his index finger against his thumb. He is in France, so he does not even bother trying to speak in English. But you really cannot take anything for granted. It turns out the tout does speak English. “I have a nice place for you,” he says. Wonderful, Rahim thinks. However, his joy is short-lived. The price is €500.

“You cannot be serious,” Rahim says to the tout. “Look, I don’t want a special seat. I am fine sitting in some corner right at the top of the stadium.” The tout is not interested in reducing the price. The deal is off.

For Rahim, this is one of many encounters with scalpers. With every hour, the ticket price dips. “There’s one hour left. The price has now come down to €250,” he says.

“I know the outcome of this little match. The longer I play, the more beneficial it’s going to be. I don’t mind missing the first 10 minutes as long as I get a ticket at my price.” There is an air of confidence about him now.

Rahim is a Barcelona supporter and has watched both legs of the Barcelona-Benfica encounter in the group stage. He says, “What would they do with unsold tickets? Once the match starts, they will have to sell at lower profit margins.” Rahim is not the only one trying to negotiate a good deal at the ground. There are hundreds like him who couldn’t buy tickets at the counter because they were sold out in no time after the quarter-final draw was announced.

When a particular stadium gets a match, it boosts the local economy. Coffee costs €5.50 in some outlets near the Parc des Princes. A garage owner charges €50 per parking space.

Surprisingly, people don’t seem to mind paying such exorbitant rates. For diehards, no price is too high to watch the home side—PSG—play its first Champions League quarterfinal in 18 years. That too, against Barcelona, one of the best teams ever in football history.

Rahim is joined by another ticket hopeful, Joao Miguel. He too is looking for ‘a sweet deal’. Miguel supports Paris, and his budget is marginally better at €100. He wants a ticket soon because, unlike Rahim, he doesn’t want to miss a single minute of the match. Miguel recently watched PSG’s round-of-16 match against Valencia, as well as their Ligue 1 match against Montpellier. “I paid €30 for the Montpellier match,” he says. “For the Valencia game I was gifted a ticket.” If only someone could do the same again.

Though Rahim and Miguel don’t have tickets yet, they are enjoying themselves in the festive atmosphere around the stadium. For a change, there is more to Parisian clothing than the usual greys and blacks. Thousands of supporters have unleashed colour through their team jerseys, scarves, hats, wigs and flags. Some come in the Argentina national team colours, and there is one rather grim-faced youngster in a Real Madrid jersey, probably hoping for a Barcelona defeat. The fluorescent green bibs of the Paris mounted police also add to the vibrancy.

Even hours before the two teams arrive at the stadium, there are taunting and singing encounters between Barcelona and Paris Saint-Germain supporters on Line 9 of the metro, which serves the Porte de Saint-Cloud station. Though outnumbered, the voices of Barcelona supporters are not doused by the PSG anthem Allez, Paris Saint- Germain (a tune similar to Pet Shop Boys’ Go West).

Football fever and business sense have impacted street artistes and musicians too. A couple of bands entertain passersby. A painter is ready with huge portraits of PSG superstars Zlatan Ibrahimovic and David Beckham. The merchandise shops resound with footfalls. PSG and Barcelona scarves and Ibrahimovic jerseys are in demand.

There are just 20 minutes left before the game begins. Rahim is still hoping to clinch a deal at €80. €100 max. After a few minutes, a tout who had earlier refused Rahim’s €100 offer accepts that price. “We could have waited more and brought the price down to €70. But we would have missed out on some part of the game. I guess €100 is not a bad deal for such a high-profile match,’’ Rahim says. He and Miguel sprint towards the stadium.