Geography Lesson under an Aerostat

The Commonwealth Games are a time for new acquaintances—like, countries you didn’t know. 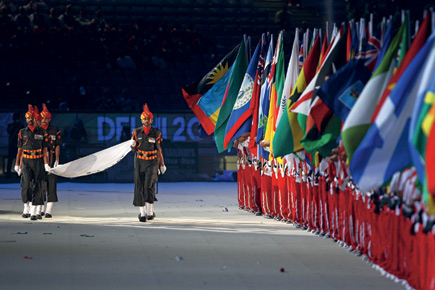 The Commonwealth Games are a time for new acquaintances—like, countries you didn’t know.


This is the interesting thing about the Commonwealth Games. The names of some participating nations provide your facial muscles a good workout. Take the case of Niue, pronounced ‘Nue-way’. First the lips pucker, then they widen. In the process, you alternatively resemble a fish and an aspirant for a role in a Close Up commercial.

There are 27 athletes representing Niue at the Commonwealth Games in Delhi. In a way, it is good that their contingent is small. Had it been a big group, there would be no one left back home. The population of this island in the South Pacific is 1,098. A local train in Mumbai carries that many people, that too in off-peak hours.

Like Niue, there are several tiny islands and regions currently in Delhi. Among others, there are Jersey, Guernsey, Nauru, Tuvalu and Vanuatu. We wouldn’t know these toy kingdoms if it weren’t for the Commonwealth Games. What a decadent geography lesson the opening ceremony was. Back in school, there was no Rs 40 crore aerostat overhead while we learnt geography.

As the contingents of these micro nations emerged from the tunnel at the Jawaharlal Nehru Stadium, in their native clothes, one felt the opening ceremony should have been telecast on National Geographic and not a sports channel.

To better understand some of our lesser known guests, we must first understand the aim and framework of the Commonwealth Games. We must start with the definition of Commonwealth itself, because very few Indians know even that. Many believe that it is a joint Swiss bank account operated by Indian politicians and gangsters. There are a few who even think Commonwealth is an item of clothing, confusing it perhaps with the cummerbund.

The Commonwealth, actually, is a club of 54 nations or regions once under British rule. It was formed so that Britain could remind itself of the grand days of its hegemony and continue to hold some kind of power over its former colonies, a kind of power that has more to do with the past than the present.

The stated goals of this group of nations were, of course, world peace and social betterment. To some extent, it did achieve these, no doubt. Then, in 1930, they added a touch of sport to the movement. The Commonwealth Games were instituted. But competition here was not to be fierce. By choice.

Over time, they came to be known as the Friendly Games. That is why one does not imagine, say, Nike, having a Commonwealth Games budget. Nike likes sports to be victory-oriented. Nike, in fact, is the name of the Goddess of Victory in Greek mythology. Why would it waste time on Friendly Games?

Nonetheless, every four years, the Bhais of the globe, like England and Australia, and their satellites, their Circuits, gather at a chosen venue for an Olympic-type competition. Although the number of member countries is 54, a total of 71 teams participate in the Games. The four nations comprising the United Kingdom—England, Scotland, Wales and Northern Ireland—send separate teams. Guernsey, Jersey and the Isle of Man, which are British Crown dependencies, also send their own teams. This is unlike the Olympic Games, where the combined ‘Great Britain’ team represents all four home nations and the Crown dependencies. Many of the British overseas territories also send their own teams. Likewise with the Australian external territory of Norfolk Island, and the Cook Islands and Niue, two states in free association with New Zealand.

Jersey and Guernsey are captivating, symmetrical names, aren’t they? They could be the name of a film starring English equivalents of Jim Carrey and Jeff Daniels. Thanks to the Commonwealth Games, however, we care enough to find out that Jersey and Guernsey are two specks in the English Channel, between England and France. Guernsey people are called ‘donkeys’, Jersey folk ‘toads’. Both islands have a certain magical type of light, which is said to be beloved to painters.

Belize and Anguilla are in the Caribbean and Central American zone. They have the blue water and white sand you see on covers of expensive travel magazines. Nauru is near Australia, like Niue. It is about 0.1 times the size of Washington DC, just in case you care for inane trivia. Kiribati is also in the South Pacific. Nauru and Kiribati are great phosphate islands. But readers would perhaps be more interested in knowing about Montserrat, in the Caribbean. One of its key industries is rum. All these entities are being represented in Delhi.

“It is a great opportunity for us to compete against larger nations at the Commonwealth Games,” says Sean Oppenheimer, chef-de mission of the ten-person Nauru squad.

“In comparison with the Olympics, we qualify for a lot of events at the (Commonwealth) Games, as the Olympic qualifiers are fiercely competitive. The Commonwealth Games give us an opportunity to compete against the likes of Australia and India, which otherwise would not be possible for us,” says Oppenheimer.

These Lilliputian lands do not shy away from the challenge of facing sporting superpowers. They may not last long, but they compete. Besides, it is not that the smaller nations have only entered the fray in fringe disciplines like lawn bowls and netball. They are also in mainstream events like athletics, tennis, weightlifting and boxing.

Although Niue has several lawn bowls exponents in its squad, its flagbearer at the opening ceremony was a weightlifter—Narita Viliamu. The flagbearer of St Helena, an island in the Americas, was a shooter with the delightful name Rico Jon Arthur Yon. Table tennis player Yoshna Shing led Vanuatu into the Nehru Stadium. The Isle of Man contingent features shooters, badminton players and gymnasts, among others.

Shooting, as The Indian Express reported a few days ago, enjoys high priority status in these small island countries. Surrounded by water and with fewer distractions than mainland nations, shooting provides their folk entertainment and a chance to channel their energy.

David Moore of Isle of Man, who won a shooting bronze medal at the 1998 Kuala Lumpur Commonwealth Games and is also a participant in Delhi, says, “Most islands tend to have lots of gun clubs… coming from agricultural backgrounds, we start to shoot through farming—bird-pests and rabbits.”

Bermuda shooter Bernard Classe says, “Life’s not always smooth, but on an island you are naturally inclined to focus.”

So welcome to Delhi, our exotic friends, where life is not only not smooth, but focus is difficult. But as underdogs, you have our support. “Come on Niue!” First pucker the lips. Then widen.