Dhoni is now in that familiar place where an Indian cricket captain, inevitably, arrives. That place where his back will slowly transform into a dartboard 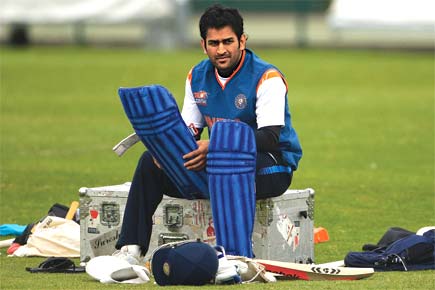 Dhoni is now in a place where an Indian cricket captain, inevitably, arrives—where his back will morph into a dartboard


South African cricketers know the price of failure better than most, whether that involves a farcical rain rule, a calamitous run-out or a botched reading of a Duckworth-Lewis chart. So when Graeme Smith says he feels sorry for Mahendra Singh Dhoni after India’s World Twenty20 debacle, you know that those are words spoken from the heart. Smith was a dressing-room onlooker the night in Durban when South Africa’s premature celebrations turned to bitter tears, and they exited a home World Cup early, and as India prepared to play a meaningless game at Trent Bridge, he spoke of how the circle of life had chosen to perhaps torment India and not those with the Protea on their caps.

“Mahendra is a very composed person but a few tactical decisions of theirs have come under scrutiny and that’s always difficult to deal with as a leader,” he said on the eve of a Super-Eights game that Mickey Arthur, his coach, had pinpointed as payback night. After all, Rohit Sharma’s brilliant half-century and tigerish fielding had dumped the then hosts out of the inaugural T20 World Cup at the same stage two years ago. “If you’ve captained for long enough, you’ve been through those phases of your career. As a leader, when things aren’t going to plan, they will turn on you. How you handle yourself and handle those situations is a sign of the type of character you are and where you’re going in your career. I certainly had a few moments like that but hopefully we won’t be facing that in this competition. Maybe it’s someone else’s turn.”

Over the next few days and weeks, as newspapers, TV channels and former players with more than rusty axes to grind, start using Dhoni’s back as a dartboard, he would do well to ponder Smith’s words. The South African captains the best cricket team on the planet, and has seen as many troughs as crests in a leadership career that started immediately after that 2003 fiasco.

Among those who follow the game seriously, as opposed to those staging effigy-burning exercises and tossing verbal Molotovs, there’s more than a dollop of sympathy for Dhoni’s plight. On Monday morning, I was on the tube, heading to Covent Garden for a meeting when I bumped into Philip Spooner, the West Indian media manager. Spooner’s team had a must-win game against England a few hours later, but he was still trying to fit in a couple of hours with family despite having been in the city nearly a fortnight.

“Since Dubai last November, the longest break we’ve had is 11 days,” he told me. “And I know it’s been twice as bad for your guys.” We spoke of skewed itineraries and bean counters, but we might as well have howled at the moon for all the effect it will have. Dhoni’s withdrawal from a Test tour of Sri Lanka last July provoked self-righteous anger in many quarters, but it’s hard to even fathom how much more jaded he might have been had he not done so. His schedule before and since, which has involved leading the national side in all three formats and the Chennai Super Kings in the IPL, would make Bionic Man go weak at the knees.

Dame Fortune though tends to kiss those who want to help themselves, and in the five years that he’s played top-level cricket, Dhoni has received more than his share of passionate smooches. But on reflection, even he will admit that he didn’t do his puckered-lip chances any good at all in England this summer. From controversies with the media to nearly-half-hour-long press conferences, and tactics that had pundits shaking their heads, whatever he touched turned into fool’s gold.

Subsequently he has seen his coach, Gary Kirsten, come out and say that the IPL is not perhaps the finest finishing school known to man, as some might have you believe. Time for him to tattoo a dartboard on his back as well, though this time it might be the Board heavyweights who take aim.

“IPL is a domestic competition, a club competition in many respects,” said Kirsten in an interview with The Guardian, voicing what some in the Indian camp dared not say. “Whilst you have international players in the team, you’ve got first-class cricketers making up the rest. There was a reasonably big gap between what is happening at IPL and what is happening internationally and that is only natural.”

“We had a bunch of cricketers who arrived quite tired. We have had a demanding schedule and we never got ourselves to the required intensity for the standard and quality of the international game, which is higher than IPL. We weren’t an energetic team,” Kirsten added.

There are interesting parallels there with English football. Over the past 15 years, the Premiership has become the destination of choice for the world’s most ambitious footballers. Yet, England’s footballers haven’t even reached a major final since the days of Geoff Hurst. The IPL and its international version, the Champions League, could well come to define the game in the years to come, but that’s no guarantee that India will dominate the global game. Or that it has some God-given right to. Out of such hubris are Titanic-style disasters born.

Usually the most suave of operators, Dhoni badly misjudged the media response when the Virender Sehwag injury story broke early in the campaign. Taking on the world’s elite teams is tough enough, without energy being expended on a war of words that can’t be won, especially against media houses with cynical agendas.

If he was shocked by the naivete and viciousness of some of the reports, Dhoni made the mistake of showing it. If the relationship with Sehwag is not all hunky-dory, it should surprise no one. After all, the Delhi man was captain-in-waiting for years, right up until Greg Chappell’s insinuations about his attitude forced him on to the sidelines in South Africa three years ago. Not that it’s even remotely necessary for the two of them to be soulmates like Bonnie and Clyde. When Sir Alex Ferguson’s Manchester United side were dominating European football at the end of the last millennium, Andy Cole and Teddy Sheringham weren’t even on talking terms. It didn’t stop them scoring goals for fun.

There is one thing that Dhoni can do. If you’ve ever heard him speak, you’ll know that ‘gamble’ is one of his favourite words. He doesn’t use it in a shady match-fixing sense, and to be fair to the man, most of his gambits have reaped fabulous rewards. But there can be such a thing as tinkering for the sake of doing so, and India paid the price for being too cute in England.

Chasing only a modest target against England, they lost two early wickets and then decided to promote Ravindra Jadeja, a 20-year-old whose international experience amounted to one one-day international and two Twenty20 games.

In the dug-out, India had Yuvraj Singh, the most-feared No 4 batsman in the limited-over game, and also Yusuf Pathan, a big hitter who seldom wastes a ball. By the time Yuvraj walked in, the requirement was 92 from 57 balls, and when Jadeja finally vacated the stage after a painfully tardy 25, the asking rate had gone into double figures. The fluency with which Yuvraj and Yusuf played against a pedestrian attack also made a mockery of the suggestion that they needed to be shielded in some way.

Show me a man who hasn’t committed an error of judgment though and I’ll show you maidens in Valhalla. Dhoni’s captaincy record before this defeat was impeccable, and those queuing up to do a Brutus on him would do well to remember that. These are still the best of times for Indian cricket, provided it can identify where it slipped up this English summer. There are other World Cups on the horizon, more global peaks to conquer, and despite the effigies, the Man From Ranchi remains the hottest captaincy ticket in town.