‘Dhoni and I have great respect for each other’

Media-shy coach Gary Kirsten, who all will agree has played a starring role in making Team India the fighting, winning unit it is today, talks to Open on how he goes about his business. 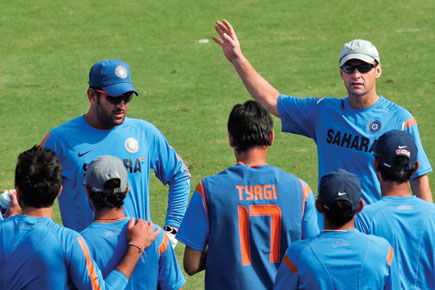 Media-shy coach Gary Kirsten, who all agree has played a starring role in making India the winning unit it is today, talks to Open on how he goes about his business.


Media-shy coach Gary Kirsten, who all agree has played a starring role in making India the winning unit it is today, talks to Open on how he goes about his business.

His impact on Indian cricket has been dramatic. Since taking over as coach of the Indian side, Gary Kirsten has successfully propelled the team to pole position in Test match cricket, the coveted pedestal this cricketing nation has been craving since first playing Test cricket at Lords on 25 June 1932. Mentoring a team that has in its ranks legends like Sachin Tendulkar, Rahul Dravid, Virender Sehwag and skipper Mahendra Singh Dhoni can’t ever be easy. Yet, Kirsten has done it with panache and confidence and the results are for all to see. A thorough professional and disciplinarian, Indian players only have praise for their coach-cum-colleague. Indian fans, on the other hand, are keen to know more about the Gary Kirsten mantra, especially when India is squaring up against South Africa in what is being touted as the unofficial world championship of Test cricket. Unlike many of his more flashy counterparts like John Buchanan or Greg Chappell, Kirsten prefers the silence of the dressing room to the constant media attention that Indian coaches are exposed to. Yet, when it comes to the welfare of the team, this no-compromise South African is relentless. Be it in his comment that India needs a bowling coach or in his constructive role in selection meetings, Kirsten has already made his mark on Indian cricket. Gary Kirsten in a freewheeling conversation with Boria Majumdar.

You deal with men who are icons, larger-than-life stars who few can match in the cricket world. How do you handle men like Sachin, Dhoni, Sehwag, Dravid?

We focus on what we are trying to do as a team and want to be measured accordingly. Each one of these players has been great to work with and do what they can to help the team achieve its goals.

Indian cricket is constantly under the glare of the media and your job is perhaps the second most high-profile after the captain. In what ways do you feel the pressure and how do you negotiate it?

My role is to help prepare the players as best I can to give them the best chance of success. I attempt to work as hard as I can to do that. The game is about the players because they are the ones crossing the ropes to make a performance. They must receive the accolades, not me.

How do you see yourself in comparison with other successful coaches like Duncan Fletcher, John Buchanan, John Wright or Tom Moody? What differentiates you from these men?

That is a tough question because apart from Duncan Fletcher, I don’t know the others that well. I think every coach has his own unique style and thoughts on how to assist in preparing a team. I believe that one’s coaching approach will change according to the team one is working with.

Please talk a bit about the Dhoni-Gary chemistry. Many things remain unsaid. But this is the chemistry that is making Indian cricket tick. It is all the more important in view of what happened between South African captain Graeme Smith and coach Mickey Arthur. How do you two handle each other?

We have a great respect for each other and we both know that the decisions we make are in an effort to achieve success for the team. We have clearly defined areas of work and we trust each other. We also both welcome suggestions and opinions that will assist India in becoming a better team.

You have played against the likes of Sachin Tendulkar and Rahul Dravid for years. How difficult was the transition to becoming their coach? Was it awkward to start with and how did things evolve?

Not at all, these players have all been really supportive and have been great to work with. They all have a tremendous work ethic and I think they have appreciated the effort that I and the rest of the support staff have put in to help them.

While we have scaled the pole position in Test cricket, our record in the one day and T-20 versions hasn’t been great in 2009. What explains these inconsistencies? How do you propose to rectify these failures, come the T-20 world cup in the Caribbean in April 2010?

One of our goals was to have a 75 per cent win ratio in one day cricket. Up until the end of the WI tour in June 2009, we achieved that, but we lost some form and confidence. It was disappointing, losing the series to Australia, but then we had a great series against SL at the end of last year. We know we have the skill and ability to be the best one day team in the world and we are fully aware of the areas we need to improve on. Our T20 form has been a little more erratic and we still have a way to go in working out how we want to play this version of the game to become more consistent.

When a player like Ishant Sharma loses form and confidence and when the media is after him, how does a coach continue to inspire him? What is the story behind Ishant’s comeback? How do you continue to keep giving a player the confidence that he so badly needs?

If a player has shown what he is capable of when competing against the best cricketers in the world, then it is my responsibility to back him and believe in him. Players will always go through dips in form and this is an important part of their learning process. Someone like Ishant can be a tremendous asset for Indian cricket as long as he is used correctly. Believing that you belong on the international stage is something every cricketer needs to work toward. For some, it takes time to get there, but once there, anything can be achieved.

You know South African cricket only too well. Is the series against them a bigger challenge, does it entail more pressure or is it just another series?

It promises to be a great series with the two top ranked teams playing against each other. In a two-test match series, one good session of bowling or batting could be the difference. Whoever uses the conditions the best could determine the winner of the series.

Coming to specifics, Indian fielding continues to be erratic at best—is there a long term strategy in place to get us up to the standard of Sri Lanka, for example?

We continue to work really hard on our fielding and do what we feel is necessary and appropriate.

Acculturation is one of the biggest problems that one faces in India. What has been your experience and how do see yourself in the next few years? Will we see Gary Kirsten wanting to go back home or is India the new home?

I have thoroughly enjoyed my two years with the Indian team. It has been an incredible journey for my family and me. I feel very much part of the team environment and don’t feel like a foreigner. This is because Paddy Upton and myself have spent a lot of time adjusting our thinking and really getting to understand what makes each individual tick. We have wanted to make a positive contribution to each individual that will allow him to grow as a person and cricketer and really enjoy himself in the process. It has been tough spending time away from the family, especially with young kids, but as ‘global citizens’ we have had to accept and embrace that.