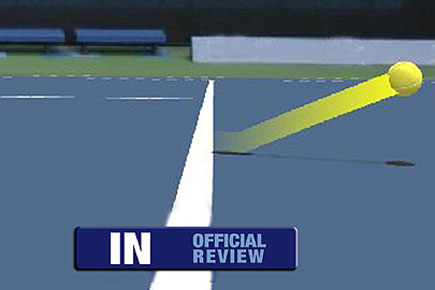 
When a player loses a match partly due to an umpiring decision he himself has to be a part of, something is wrong somewhere. On Sunday at the Australian Open, Novak Djokovic defeated Stanislas Wawrinka in a tense five-setter that ended past midnight in Melbourne. Djokovic won 1-6, 7-5, 6-4, 6-7, 12-10 after a five-hour battle. But not before the contentious aspects of the player challenges (electronic review) became apparent in the eighth game of the fifth set.

It was in that game that Wawrinka had his best opportunity to take an almost decisive hold on the match. Djokovic was serving at 4-4, with advantage to Wawrinka. Wawrinka was within one shot of breaking serve to lead 5-4.

Feeling the pressure, Djokovic missed his first serve. His second serve was relatively weak. Wawrinka jumped on it, blasting a forehand back near Djokovic’s feet. But the shot was called out.

Wawrinka contemplated asking for a replay. But he had only one challenge remaining. (A player can challenge as many times as he wants, but if he is proved wrong three times in a set by the HawkEye replay, he gets no more challenges. If the set goes into a tiebreaker, he gets one more challenge.) In the few seconds that Wawrinka got to make the decision, he looked at chair umpire Enrique Molina, who indicated that the ball was indeed out. Wawrinka opted not to challenge. The score was back to deuce.

Nevertheless, the video boards at the arena, and television sets around the world, showed the replays. Turned out that Wawrinka’s shot had landed on the line. He had, for all practical purposes, won the game and should have held a 5-4 lead, with his own serve to follow. Whether he would have held his nerve and closed the match is another debate. But Wawrinka had nailed that forehand right. He just chose not to ask for a replay. And he did that because he wanted to save his last remaining challenge. Had he enough challenges, he would have asked for electronic review.

All of us enjoy the drama and controversy that human umpiring brings to sport. But given a choice between theatre and a fair result, most fans would choose the latter, if only grudgingly. A lot rides on elite sports contests. Wrong umpiring can undo a lifetime’s effort and have traumatic consequences. English football took forever to recover from Diego Maradona’s Hand of God goal in the 1986 World Cup. (Some years later, the referee for the match, Ali Bennaceur of Tunisia, blamed his decision on medication for haemorrhoids, which he said hampered his vision). Often the umpires suffer more than the teams. Respected Swedish football referee Anders Frisk was forced to leave an occupation he loved after he received death threats from Chelsea fans in 2005. Their anger was triggered by the antagonistic Jose Mourinho, then Chelsea’s manager. Chelsea lost to Barcelona in a Champions League game which Frisk officiated. Moruinho laid part of the blame for Chelsea’s defeat on him.

The late RC Sharma, the cricket umpire, was equally hurt by his humiliation over his infamous goof-up, when he raised his finger to give Ajay Jadeja out but changed his mind and scratched his head. There is no doubt it was a farcical call from Sharma, but it overshadowed everything else he did and made him a subject of universal ridicule. Therefore, using technology to eliminate errors is not a bad thing, as long as the technology is thoroughly tested. The problem is with the limited number of referrals allowed. Once a sport has decided to take electronic help, why do it halfway? Might as well make more use of it. This is perhaps easier said than done in cricket and football, where umpires have a whole range of things to keep an eye on and are a part of the traditional identity of the games. But in tennis the umpire mainly just watches the lines and keeps score. Making greater use of technology in tennis would not greatly limit the umpire’s role. It also won’t compromise the game’s romance to the extent it would in cricket or football. It is true that an unlimited number of challenges cannot be allowed, as players could use them as an excuse to buy time. But surely the number of challenges allowed could go up from a mere three per set.