A Vision of Victory

How India won the Blind World Cup in cricket 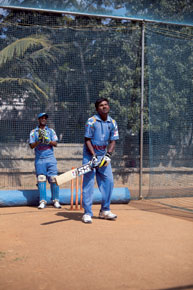 How India won the Blind World Cup in cricket

Earlier this year, the Indian blind cricket team was in turmoil. With the Blind World Cup in South Africa less than nine months away, a tournament India has never won, the Indian team’s most prolific batsman and captain, Shekhar Naik, who had led the team to victory in the inaugural 2012 T20 Blind World Cup Cricket, wanted to retire. The Indian blind cricket team had just completed a tour of Pakistan, where they had lost both the ODI and T20 series.

“We got a real pasting,” Naik says. They lost both series 1-2. Naik himself scored very little. Although the Bengaluru-based World Blind Cricket Council, which is the equivalent of the International Cricket Council in blind cricket, began to maintain cricket records only two years ago, Naik has maintained a diary of his batting records. Up till then, he had scored 31 centuries, which includes the 198 not out he scored in Rawalpindi in 2004 and the 134 in 58 balls that he scored during the T20 World Cup two years ago. When he consulted it, he says, he realised how little he had scored in the last few years. “It was time to step down,” he says. “To not let myself become a burden on the team.”

But the team and the coach forced him to reconsider his decision. They told him they needed an experienced captain and batsman to lead their campaign in the World Cup. So Naik agreed to defer the decision till the series against the Australian blind team, which was visiting India for a two-match T20 series in April. India won both matches handsomely, and Naik scored more than a century, 132, in one game. “So I agreed. Perhaps I still had something left to contribute,” he says.

Naik and his teammates underwent a 20-day-long training camp in Cuttack in November, although whether or not they would be on a plane to participate in the tournament was yet to be decided. All the corporate houses that the Samarthanam Trust for the Disabled—an NGO that through the Cricket Association for the Blind in India (CABI) administers blind cricket in India—approached for sponsorship had turned them down. Some help from the Sports Ministry was expected, but whether that would be enough wasn’t known. The Board of Control for Cricket in India (BCCI) has so far refused to recognise and support the blind cricket team. A few weeks prior to the tournament, however, the Sports Ministry decided to bear the entire cost, Rs 25 lakh.

In the tournament, apart from a solitary loss in their first match, against Pakistan, India won every match. In the final, they met Pakistan once again. Pakistan scored a mammoth 389 in 40 overs, and at one stage India needed as many as 148 runs in the last 11 overs. But India chased the target, the match going down to the last over. Naik himself got to bat only thrice in the tournament, but he scored 222 runs, including a 147 in the semi-final against Sri Lanka.

Blind cricket is not very different from regular cricket, except for a few modifications to enable the visually- challenged to play. Bowling is always underarm, either spin or fast, and it has to hit the pitch at least twice before reaching the batsman. The ball itself is made of reinforced plastic and filled with ball bearings to make a rattling sound. Batsmen, especially those who are completely blind, or B1, usually employ the sweep shot, although like the standard game, more shots have evolved, and it is not unusual to see someone hitting a lofted cover drive. Both batsmen and bowlers have to give audible clues, the batsman shouting “Ready!” when he is ready to face a ball or the bowler shouting “Play!” at the point of delivery. At least four players in every team must be completely blind, or B1. A B1 fielder can take a catch on the bounce and every run they score is doubled.

A blind cricket match cannot be described as anything else but a vision of incredible human triumph. Bowlers and batsmen have to feel the stumps to orient themselves towards which side to bat or bowl. Yet a batsman, crouched low to the ground to better hear the rattling sound of the ball, hits a ball he cannot see, basing his stroke completely on the noise the ball makes. Fielders dive full-length to stop balls, and then, instead of throwing the ball, run to the bowlers’ end to feel for the bowler’s hand to pass the ball to.

The game is said to have developed in the 1920s, beginning with blind factory workers in Australia who played the game using a tin can containing rocks as a ball. It is played by all ten Test playing nations in the world. Blind Cricket World Cups have been held since 1998, Pakistan— considered the strongest team, since the Pakistan Cricket Board is known to support it—having won it twice.

According to GK Mahantesh, general secretary of CABI and one of the founders of Samarthanam Trust for the Disabled, who is also a former blind cricketer, blind cricket developed on its own in the country. In the 1970s, visually- impaired youngsters who used to follow radio commentaries of cricket matches started playing the game themselves. “Many of us had never seen what a cricket game looked like, but we became moved by the commentaries on radio,” says Mahantesh. “We used to use empty tin boxes as balls and sticks as bats.”

Gradually, blind schools got involved and inter-school tournaments were held. The plastic ball with bearings was developed by the National Institute for the Visually Handicapped in Dehradun, and is now accepted as the international standard. The Association for Cricket for the Blind, India, CABI’s predecessor, was also formed to administer and organise blind cricket tournaments in the country.

As a child, one tragedy after another befell Shekhar Naik—his father died when he was eight years old, his mother two years later, and he spent his childhood in a hostel for blind children. Cricket, he says, became his only succour. It, in fact, became more than that. The young boy who was born completely blind, whose vision in the right eye was restored to 60 per cent through surgery, played blind cricket every single day. He became an aggressive batsman who could bowl (under arm) medium pace, acquired a radio and followed the matches of the national cricket team, and he modelled his batting, he says, after Virender Sehwag.

By the age of 14, Naik was playing for the Karnataka blind cricket team. In his first year, he scored 249 runs against Kerala in an ODI. Within two years, he was playing for the Indian team. When Naik entered the national side, blind cricket did not maintain any records. He sat down with a diary every night after a match, meticulously noting down the runs he had scored, the balls he had faced, the boundaries he had hit, and the opposition he had played against. Playing as either an aggressive opener or at three wickets down, Naik has come to be regarded as one of the best blind batsmen in the world. So far, as his records show, he has scored 33 centuries in over 68 international matches, including both ODIs and T20s.

However, his achievements on the cricket field have been of rather little benefit off it. Despite having applied for various posts, he hasn’t been able to secure a job for himself. He currently works with Samarthanam Trust as its sports co-ordinator. “We don’t look at cricket as a thankless job,” he says. “It [may not have] gotten us jobs or something. And that is disappointing. But it has given us so much more. It has allowed us to be proud of ourselves and our achievements.”

Mohammed Jafar Iqbal, a 26-year- old, completely blind player from Bhubaneshwar, and one of the few in the national squad with a job, departed for the Blind World Cup without his leave from work being sanctioned. Iqbal works as a procurement inspector with the Orissa Civil Supply Corporation, his duty being to manage a depot where grains are stored. “I know I will probably not get my salary for those absent days,” he says. “But that is insignificant when compared to the joy of not just participating in, but winning the World Cup.”

Blind cricket isn’t very different from the standard game. There are wily spinners, fast bowlers, batsman who throw their wickets and those who score too slowly. There are also reputations, personal ambitions, and the desire for captaincy. There is the AP Express, Ajay Kumar Reddy from Andhra Pradesh, who is supposed to be the fastest (blind) bowler in the world. His deliveries, when measured during the T20 World Cup two years ago, were as fast as 120 kmph. There is also the captain, Naik, with a reputation of being an aggressive batsman.

Iqbal, who made it to the side in 2011, is considered part of the next generation of blind cricketers who will become the batting mainstay of the team. Blind cricket rules are structured in such a way that the batsman who walks to the crease has to be of the category that the two previous batsmen from the team did not belong to. Hence only a B1 (completely blind) player can come in to bat if the two batsmen ahead of him were B2 (those who can see up to three metres) and B3 (those who can see up to six metres). But Iqbal, who falls in the B1 category, rarely ever gets a chance to bat higher up in the order, since that slot is usually occupied by a senior B1 player, Ketan Bhai Patel. “I don’t know how it can be resolved. Ketan Bhai is a world- class player. But I would like to bat higher when there are more balls to face,” he says.

Iqbal is also the captain of the East Zone. He says that once Naik retires, if given the opportunity, he could lead the national team. But for a B1 player to take on the responsibility of captaincy, drawing up, setting the field and making bowling changes, is going to be extremely challenging. According to Iqbal, currently no international team has a B1 player as captain. “But I have been in the team for a while. And I think I can do it,” he says.

Two-and-a-half years ago, Naik learnt that his four-year-old daughter needed a cataract surgery. Naik’s blindness is genetic, his mother and grandmother also having suffered from it. “It was a horrible feeling,” he says. “To know that she could go blind and that I was in a way responsible for it.” Although the surgery went well, he continues to worry about her.

After the team won the finals, Naik called his wife the following day. “She told me that when Purvika (his daughter) learnt about the victory, she began bursting crackers with some friends from the neighbourhood,” he says. “But the kids told my daughter India had won the World Cup three years ago.”