A Classic and its Afterlife

CLR James’ Beyond a Boundary on its 50th anniversary 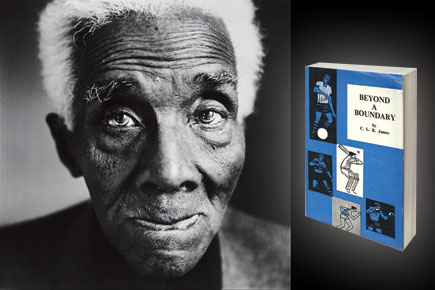 CLR James’ Beyond a Boundary on its 50th anniversary


The book was not called Beyond a Boundary when CLR James finished the first draft of the manuscript in 1957. He was convalescing in Barbados at the time, having suffered a car accident in Jamaica. Seriously unwell, he scribbled a possible title in his own handwriting: ‘Who only cricket know’. It was only later that the title was changed to Beyond a Boundary. And this change was prompted by the needs of the market. James and his friends had sent the manuscript to all of England’s leading publishers, and everyone turned it down. Many of them considered it too intense and esoteric a cricket book. Finally, publisher Stanley Paul printed the book in 1963.

It has sold over 40 million copies.

It is not known what James thought of the change of title. The original title did not leave the book altogether. In the preface, the author poses the question, ‘What do they know of cricket who only cricket know?’ Entrenched in a battle against racial discrimination, for James there was no cricket outside the dynamics of British colonial rule. For him, cricket was at the centre of decolonisation movements across the Caribbean islands, and to see a Black captain at the helm of West Indian cricket was the ultimate goal. Frank Worrell was his candidate and James was successful in realising his mission in 1957 when Worrel was appointed the first Black captain in the history of West Indian cricket.

An autobiographical treatise of growing up in Trinidad and a politico-historical assessment of West Indian cricket, Beyond a Boundary places cricket at the very centre of the West Indian imagination and cultural practices.

This piece isn’t meant to critically analyse the book. Hundreds have done so over the past 50 years and it is a testimony to its intellectual rigour that it is one of the most taught and used books in universities across the world.

On the occasion of its 50th anniversary, what is important to discuss is the manuscript’s post-publication life. Following its publication in 1963 and a second edition in 1964, James had decided that the original manuscript needed to be put to good use. Already a classic, it was subsequently used to raise funds for the Mandela relief campaign and it raised about a million dollars for the cause. The manuscript eventually landed in the hands of a Jewish businessman. As Sir Hilary Beckles, principal of the Cave Hill Campus in Barbados of University of West Indies, says, “I don’t know how, but after having done its bit for the Mandela relief campaign, the manuscript turned up for auction at Sotheby’s in the early 1990s, just a few years after James passed away in 1989. I was in London at a time and got a call fairly late into the day from a friend telling me that Beyond a Boundary was going under the hammer the following morning. A businessman had put it up for auction.”

It was natural that Sir Hilary, a noted James scholar who was behind the setting up of the CLR James Research Centre in Barbados and who wrote the introduction to the latest edition of Beyond a Boundary, would want to rescue the manuscript from being picked up by an anonymous collector. “Knowing that it was to be auctioned, I traced the auctioneer and subsequently found out who the owner was and who had submitted the item to Sotheby’s. I went to him that night itself to suggest that the manuscript belonged to Barbados. I told him that James is buried in Barbados and that it was at Cave Hill that he had finished the manuscript. I also said that Sir Frank, the main protagonist of the book, is also buried in our campus at Cave Hill. Finally, I emphasised that we have the world’s leading James research centre… Barbados was the natural home to the manuscript for it belonged there. The man listened with intent, but asked me thereafter how much money I had on me to offer for the manuscript. Taken aback, I did not answer. At this I was told that he’d already had a bid of a million dollars from a leading American university. I did not have a tenth of the money and returned to my hotel unhappy and disillusioned.”

Something else happened after that. Hilary says, “I got a call late in to the night at 11.30 or so from the owner, and before I could say a thing, he asked me if I could transfer £20,000 to his bank account within half an hour. If I did the manuscript would be ours. I pleaded for a little more time and did all I could to get the money organised. The amount was transferred to his account first thing in the morning and true to his word the item was withdrawn from the auction. I was later informed that the owner felt that the University of West Indies was the rightful home for the manuscript and had instructed the auction house accordingly. We have the original manuscript with us and scholars visiting the campus can take a look at it.”

The story doesn’t end here, however. What we are celebrating today, on the occasion of the book’s 50th anniversary, is actually an incomplete manuscript. The original had two chapters that were never published. In these two chapters, it is believed, James got his analysis completely wrong. He was of the opinion that Frank Worrell should not lead the West Indian side to England in 1963 for he had outlived his usefulness as West Indian skipper. James argued in a series of journalistic pieces that it would leave a black mark on his legacy if he did so. Sir Frank was already a legend and a failure to win in England wouldn’t go down well in the West Indies. ‘He can add nothing to our and his reputation. But he can lose a lot of both. Send Frank as manager; send him as special correspondent for the West Indies press; send him as Ambassador or Special High Commissioner to the Court of St James. But not as 1963 captain, thank you. We must have a new slogan. Here it is: ‘Worrell not for captain’,’ James had written in March 1961.

He expressed the same sentiment in the two unpublished chapters of Beyond a Boundary.

History demonstrates James was wrong. While Worrell did not have a good series as a player, he led the West Indies to a convincing series win in England, thus cementing his legacy as a symbol of Black resurgence. It was because of this that James’ family in consultation with him refused to authorise the publication of the two concluding chapters when Stanley Paul finally published the book in 1963. In fact, efforts are still on to bring to light the complete manuscript, though it doesn’t seem probable. While publishers argue that a classic that has already sold millions of copies should not be tampered with, the family does not want to let the world know that James had in fact got it wrong in the end. Accordingly, these two chapters will probably never reach readers at large.