The tally of self-immolations, since the first such protest was reported in 2009, has gone up to 85 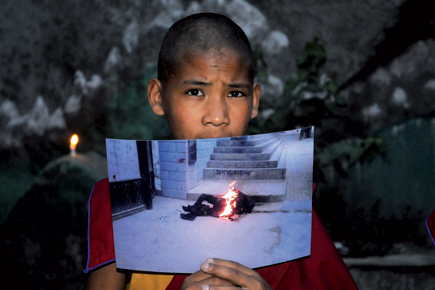 The tally of self-immolations,  since the first such protest was reported in 2009, has gone up to 85


Until 27 November, 24 Tibetans had set fire to themselves as a form of political protest in this month alone. This takes the tally of self-immolations— since the first such protest was reported in 2009—to 85. The self-immolators, most of who have succumbed to their wounds, do it to highlight human rights abuses in China-occupied Tibet, to demand freedom and seek the return of the Dalai Lama.

This wave of self-immolations, some of which have also occurred in India and Nepal, plus a suspected case of a British Tibetan monk, is unparalleled in its sheer number. According to Free Tibet advocates, this is a reaction to a hardening of stance by the Chinese government. A number of Tibetans have been detained on suspicion, attempts made to discourage the teaching of the Tibetan language in schools, and there is continued large scale migration of Han Chinese into Lhasa and other parts of Tibet. Apart from the self-immolations, there have also been a number of riots in November.

Most self-immolators have been young monks and individuals in their 20s. The first self-immolation occurred in February 2009, when a monk from Kirti monastery in Sichuan province, Tapey, burnt himself. He survived but officials stepped up surveillance of the monastery. The high-handed manner in which the authorities reacted—picking up monks on suspicion, banning religious activities, smashing photographs of the Dalai Lama and forcing them to attend patriotic re-education sessions—is believed to have led the monastery to become a hub of self-immolations.