The primacy of Lord Ganesha 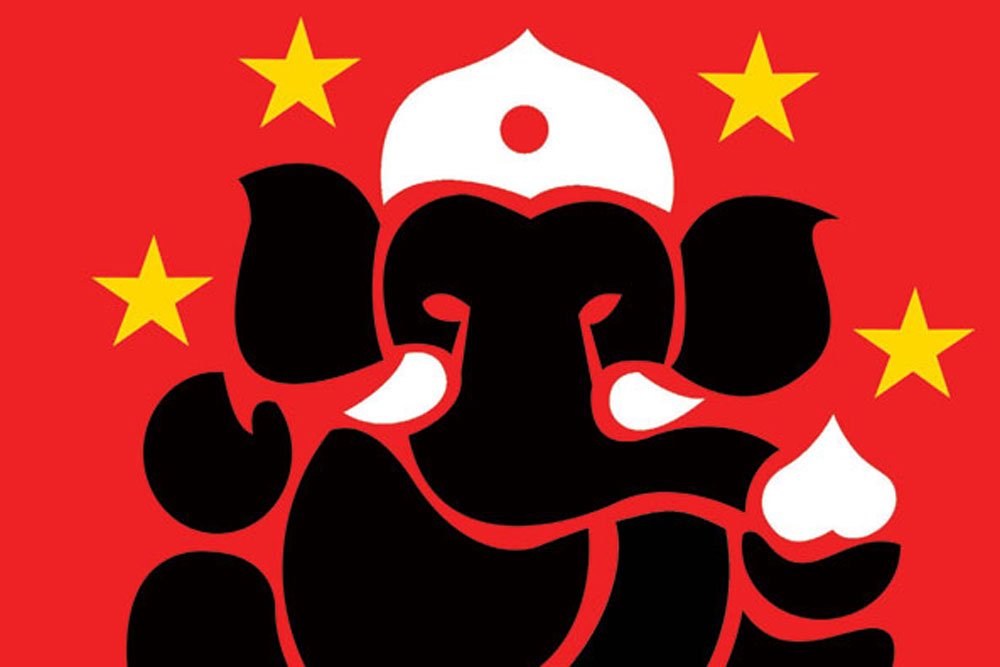 Lord Shiva was like kinetic energy. To remember a school equation, the formula to find this out was mgh, or mass multiplied by gravitational force multiplied by the height. Snug in the icy Himalayas (if such a condition could exist), Shiva was positioned at the acme of height. This was indeed the highest point on earth. Shiva was content to remain deep in meditation. The intense cold, the distance to the noise and rabble of life and the solitude made it conducive for this potential energy to continue in this form without change. Shiva was Purusha, still, vital and silent.

His spouse, the Mother Goddess, was potential energy. She was prakriti manifest. Her energies spilling into manifold shapes. It was she who awakened the deeply meditative Shiva and made him start the process of creation with her. Contrary to what a lot of Shaivites and Vaishnavites would like to profess, it is said that Shiva was meditating eternally on Vishnu, while Vishnu was doing incessant worship to Shiva. It would seem again and again that the conflict was not between the divinities but rather their aficionados!

The Mother Goddess had to be hard at work to wean Shiva away from his dhyana. In fact, it is said that she changed herself into a lizard and started physically arousing her lord, by moving deftly and sensuously on Shiva’s linga. The chittering of a lizard holds a lot of portends and the ancients had an entire book devoted to it, the translation of which is Gowli Shasthram (Gowli being a lizard). If a lizard chittered when someone said something, it was believed that it would come true, much like the invisible Ashwini twins wandering around the universe, reiterating “Thadhasthu, Thadhasthu” (let it be thus, let it be thus), making uttered statements come true. If a lizard fell on a person, its colour was looked at, as well as the time and the place of the anatomy it had fallen on. Apart from the very practical use of killing mosquitoes, it was considered to be bad luck if one killed a lizard. This little creature got all this importance as the Mother Goddess had once chosen to take on its form!

Shiva was first married to the Mother Goddess who was then Sathi, daughter of the arrogant Daksha Prajapati. Daksha always thought that as son-in-law, Shiva had never shown him much respect. As often as it is in the case of human beings, it was the girl who was caught in the conflict between her husband and father, Sathi found herself in this uncomfortable position. Her love for Shiva was such that she chose to destroy her body which had come out of Daksha, who had never appreciated Shiva. Her vow at her self-immolation was that she would return to become Shiva’s wife, but this time as the daughter of someone who would revere Shiva.

Parvati was indeed Sathi reborn as the darling daughter to Himavaan, who worshipped Shiva. After the death of Sathi, Shiva had become inaccessible. He seemed determined not to engage with the world. It was after a lot of unswerving effort that Parvathi managed to get Shiva as her husband! Mena, wife of Himavaan, was distraught at the thought of her tender little girl marrying the ascetic Shiva! For the sake of his mother-in-law, Shiva let Vishnu and Chandra, the moon god, deck him up for the wedding. This manifestation of Shiva is known as Soma Sundareshwara and is considered to be a match in looks for Vishnu himself, long considered to be the most handsome of gods.

However, Parvati had fallen unconditionally in love with Shiva. His scant leopard skin loin cloth, snake jewellery, ashes all over his body and his greatly boisterous associates did not unnerve Her. As soon as they left the city of Himavaan, Parvati urged Shiva to get back into his usual form. She was in love with Shiva and not just His “pleasing” forms.

Even though Parvati accepted Shiva the way he was, she became lonely in the snowy heights of her marital home. One day, unable to put up with the fact that apart from Shiva, she had no one to call her own in Kailasa, the Mother Goddess created a little boy out of the sandal paste she had put on her body. This boy was solely her creation and was hence known as Vinayaka, or he who was born without a sire.

Thrilled with this child, Parvati showered all her love on him. Vinayaka was given many gifts by his doting mother. He was also told to let absolutely no one enter Parvati’s quarters without her express permission.

Shiva himself was stopped from entering his wife’s rooms by this little stranger who nobody in Kailasa had seen before. Despite telling the boy that he, Shiva, was Parvati’s husband, he was refused entry to his wife’s domestic quarters. Vinayaka was killed by Shiva in the fierce battle which followed. A furious Parvati threatened to destroy the whole universe in exchange for her son’s blood. She did not care that it was Shiva who was responsible for it. Fully aware of her powers of destruction, all the divinities conspired to revive Vinayaka.

The head of the first creature sleeping with it pointed towards the West was cut off—in this case, that of an elephant—and joined with the body of the slain Vinayaka. Thus was born one of the most easily recognisable deities of Hinduism, with his elephant head. This was quite unlike the case of Hayagriva and Kalki, the future, final incarnation of Vishnu who are very similar in iconography.

Parvati was naturally worried that her son would end up being a laughing stock. Again, to pacify her fully, all the gods declared that it was this cute god who had to be worshipped at the very beginning of things. With the great power of a pachyderm, Vinayaka could easily remove all obstacles and was thus propitiated before anything else. Vinayaka was also made the leader of Shiva’s ganas, and hence became known as Ganapathi.

Much like Shiva, Vinayaka was easily pleased. One of the most effective pujas to Vinayaka was to light a lamp with two flames pointing to the east and west. A sphere of molasses and a round coconut was offered to Ganapati. He was then petitioned to fulfil the devotees’ wish. Upon that being done, a second round of offerings would be given.

It was important to offer “spheres” of molasses and round-shaped fruits to him. The reason is that the spherical shape would denote fullness.

Another common offering was the “Pancha Phala Daanam”, or offering of five fruits as Naivedyam. Each fruit stands for one element of the five elements: air, fire, earth, water and space, which are the building blocks of the universe. Unless pleased, Ganapati was quite capable of blocking things with his tusk and trunk.

The silhouette of Ganapati is shaped like an “Om”. He used his broken tusk
(which he lost in a battle with Parashurama) to write out the Mahabharata as it was orally recited by Vyasa. There is a story about Ganapati’s broken tusk. Anybody who placed the piece of tusk on the ground would be responsible for the annihilation of the world. Naturally, no other god wanted to do that. Nor could they hold the piece of the tusk indefinitely.

Narada got the bright idea of putting the piece in a peeled banana skin and handing it back to Ganapati himself. Being very fond of food, Ganapati eagerly took the doctored banana. Many of Ganapati’s vigrahams have this bit of ivory, shown clasped in his own hand.

Ganapati is one deity who proves that divinity in this ancient land goes far beyond what is deemed to be normal and rule-bound.