The church attacks in Delhi

Father Vincent Salvatore alleges that it was a case of desecration, as neither money nor valuable objects were stolen 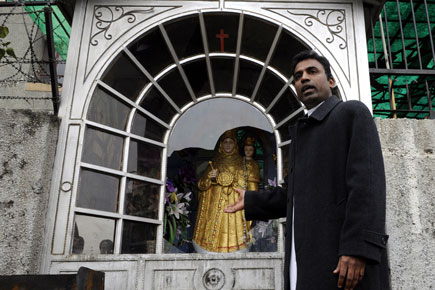 Father Vincent Salvatore alleges that it was a case of desecration, as neither money nor valuable objects were stolen

A church in South Delhi’s Vasant Kunj area was vandalised by a group of unidentified men in the early hours of 2 February, the fifth incident of its kind in the past two months. The vandalisation of St Alphonsa’s Church has sparked outrage among Christians whose local leaders allege a ‘hate campaign’ against them. Similar incidents have taken place at churches in Dilshad Garden, Jasola and Vikaspuri.

Father Vincent Salvatore, a parish priest, says the miscreants entered St Alphonsa’s church by breaking open the main door. The tabernacle on the main altar was opened and the chalice and the monstrance were removed. The Holy Communion hosts were thrown around the place. The adjacent room, called the Sacristy, in which vestments and other valuable articles were kept, was also ransacked. He alleges that it was a case of desecration, as neither money nor valuable objects were stolen.

The Delhi Police, however, maintain that the break-in was an instance of petty theft and that is how they have registered the case. Delhi’s Archbishop Anil JT Couto expressed concern about the frequent attacks and said it “is a reflection of the hate campaign and false propaganda by groups whose sole aim is to break religious harmony and social peace.”

Meanwhile, the Union Home Ministry has sought a report from the Delhi Police asking about steps taken to ensure the safety of religious places across the city and the number of arrests made in cases of attacks on religious places in the last six months. The National Human Rights Commission has taken suo motu cognisance of the matter and issued notices to the Home Ministry, the Delhi Government and the Delhi Police calling for detailed reports.