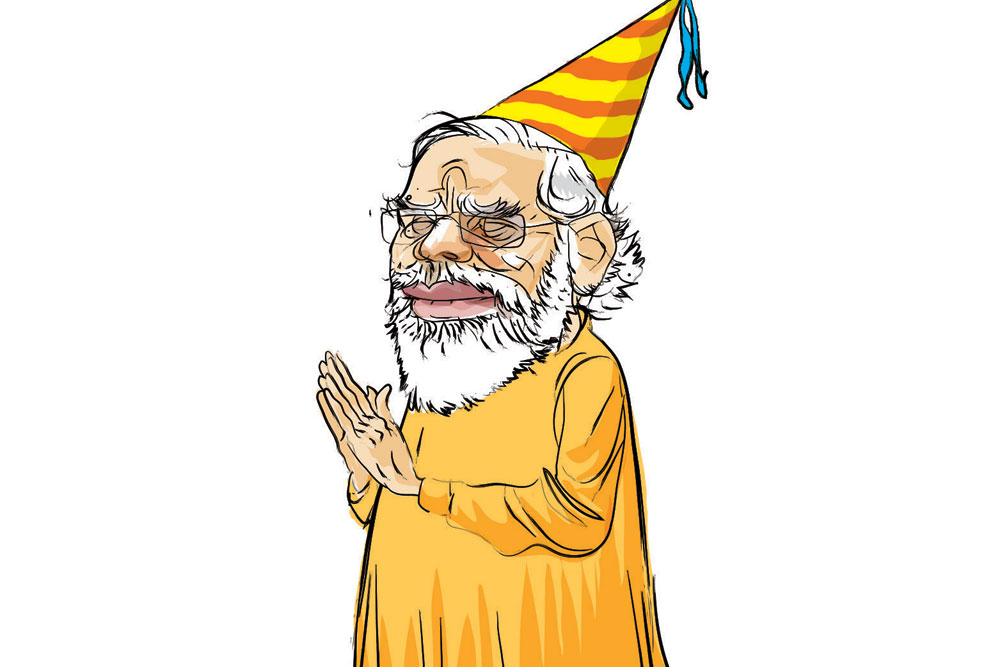 
September 17th is the birthday of Prime Minister Narendra Modi. He will turn 70. Because of the pandemic, Modi has told his associates that there should be no celebration that would lead to gatherings. The party has decided to observe a week of service from September 14th to 20th, when they will distribute masks, hand sanitisers, donate blood and so on. People have also begun to notice Modi’s rather long beard. He has not trimmed it for what looks like quite a few weeks. No one knows why and nobody can ask him either. A popular belief is that the untrimmed beard is because of some vow to god for something he wants, perhaps the end of the pandemic or an early vaccine. Thereafter, Modi will trim it. Others are waiting to see if he does so on his birthday.

To Denmark, with Love

Denmark’s new Prime Minister Mette Frederiksen is the youngest ever in her country’s history. She will turn 43 on November 19th. Prime Minister Modi is sending a special gift to her. She is doing the same on September 17th, Modi’s birthday. Frederiksen is eager to come to Delhi on an official visit. If a trip is not possible, there could be a virtual summit of the leaders. For India, a good relationship with Denmark may help counter China’s influence in the Nordic states and, by extension, in the European Union.

External affairs ministers don’t usually write books when in office. But S Jaishankar departed from that tradition when his new book was released recently at an online event. As to the question why Jaishankar broke the convention, there may be a simple answer. It is said that he wrote the book after his retirement as foreign secretary. He did not know then that he would be made foreign minister. After his appointment, he asked the Prime Minister whether to publish or not and was given the go-ahead. But he was advised to keep in mind that whatever he wrote would have global implications. Jaishankar then ‘re-read’ the manuscript and edited the book. He reportedly deleted 10,000 words. Rumour has it that those were words mostly about China.

While the Congress is still busy probing into the letter over party leadership signed by 23 of its leaders, Shashi Tharoor, a key signatory, is having a lot of fun with his new book, Tharoorosaurus. It is a book on vocabulary about which there are many jokes on social media, all related to him. Tharoor himself seems to be having a good time interacting with his many followers over tongue-twisting words. The book is said to be a hit even in BJP circles.

Durga Puja is in October this year. But on social media, it is being said that West Bengal Chief Minister Mamata Banerjee may not give permission for the festival and impose a lockdown. She is furious and says that the rumour is part of the BJP’s “communal” campaign because there is no such order. She had now ordered action to be taken against anyone spreading such rumours.

Who will be the BJP’s chief ministerial candidate in West Bengal? The official position is that there will be no name announced before the election. But right from its old Jana Sangh says, the tradition has been to go into an election with a candidate as its face. Dilip Ghosh, the state party president, is close to the RSS and could be a contender. There is also Babul Supriyo, who has a huge following in the state. A popular singer and a Union minister, his fan clubs are demanding that he be the BJP’s candidate. Even Locket Chatterjee, actress-turned-MP, is a potential name. Mukul Roy, who jumped ship from the Trinamool Congress to the BJP, is a mass leader and expects the support of the BJP’s West Bengal in-charge Kailash Vijayvargiya. Former Trinamool leader and former Kolkata Mayor Sovan Chatterjee has become a BJP state committee member and his name might also feature. Modi and Amit Shah have reportedly told party president JP Nadda to see to it that all these leaders work for the common purpose of winning the state.

Samajwadi Party leader Akhilesh Yadav has got on the bicycle, his party symbol, to start a district-wise tour of Uttar Pradesh. Priyanka Gandhi is also active in the state’s politics. She has announced several names for committees in preparation for the 2022 Assembly elections. So Akhilesh, too, has to get his game going.

Kalraj Mishra, an old BJP hand, has completed one year as Governor of Rajasthan. When the Sachin Pilot rebellion happened in the Congress, there was a big rift between him and Chief Minister Ashok Gehlot on holding an Assembly session. Both have, however, put the bad blood behind them and are behaving like friends. The Congress had also complained about the Governor getting a Mercedes car that cost Rs 1.5 crore and the use of state aircraft frequently for trips from Jaipur to Lucknow. Now the Congress has become silent on these issues. Recently, a book on Mishra’s first year as Governor was released. Gehlot and the speaker of the Assembly released the book. Doesn’t cross-party civility always look good for democracy?