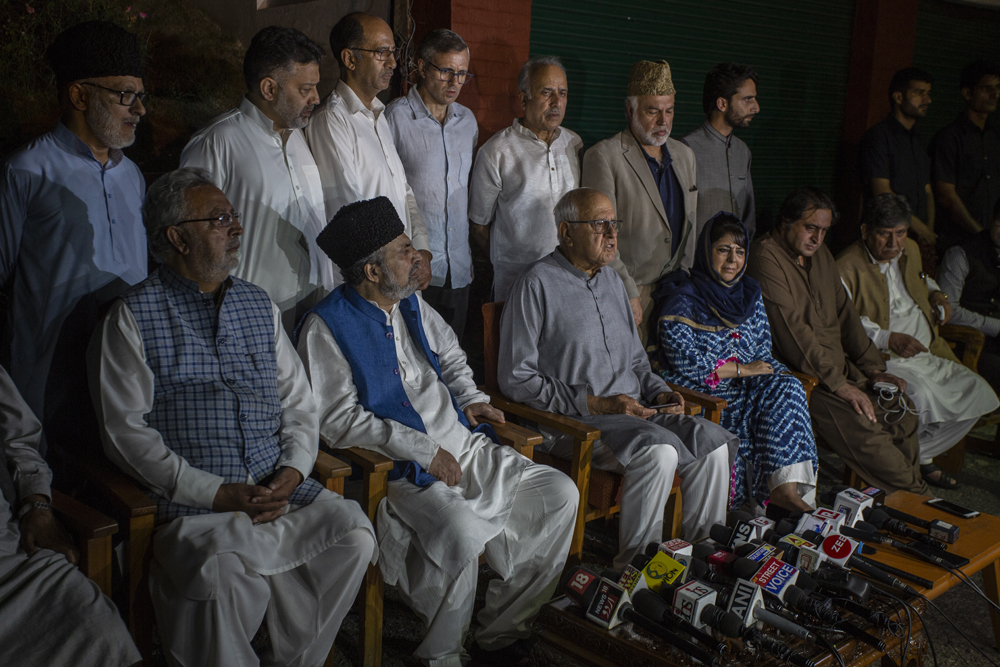 
THE SPONTANEOUS OR manoeuvred fracturing of polity along traditional identities is misaligned with development—our core concern today—which, by definition, is inclusive.

But just as surely, papering over political sores festering over the last seven decades, like in Kashmir, has not helped. The constitutional coup by the Union Government on August 5th to ‘integrate’ Kashmir could be a bold step towards frankly defining the framework within which a solution must be found. Admittedly, the ‘lockdown’ associated with implementing the decision has come at great personal cost to those who live in the Valley, their friends, relatives and well-wishers in India and abroad.

Jammu—majorly Hindu—continues to be hyphenated with the new Union Territory of J&K whilst Ladakh has been hived off into a separate Union Territory. The outcome is that both the successor entities of the erstwhile state of Jammu and Kashmir (SJ&K) continue to exhibit religious plurality: Kashmir primarily Muslim with a significant Hindu component in Jammu and Ladakh majorly Buddhist with a significant Shia Muslim component in Kargil.

This configuration aligns with religious pluralism—a central feature of the Indian Constitution. Cynics view this as a mechanism to whittle the electoral significance of Muslims of Kashmir. But the hope, irrespective of the political intent, remains that continued economic and political synergy across communities and a more effective, even hard-line, stance on curbing violent extremism would receive the approval of the population in Kashmir. Ending violent extremism is the only way to create the conditions for growth with equity.

Cynicism about the prospects for peace in Kashmir is widespread and mostly linked to the core Bharatiya Janata Party (BJP) belief in ending ‘appeasement’ of minorities. The BJP argues that it is committed to even-handed treatment of all communities. However, It doesn’t help that strong action, of the kind taken recently for the integration and reorganisation of Kashmir evoke triumphalism, bordering on entitled aggression, amongst the hard core Hindu, fringe groups affiliated with the Rashtriya Swayamsevak Sangh.

The residents of Kashmir have been Indian citizens now for seven decades since October 1948. But they remained attached to their constitutional exceptionalism: a notional ‘autonomy’ which sprang from having their own constitution and their own flag in addition to being bound by specific provisions of the Indian Constitution and swearing allegiance to the national Tricolour. Their constitutional ‘integration’ is now complete. The provisions which apply to them resemble those applicable to Puducherry.

This convergence has evolved over the years with Kashmiri consent. All that happened on August 5th was that Parliament acting on the Governor’s advice voted by a two-third majority to annul the constitutional exceptions for Kashmir, inserted via the enabling provision in Article 370. The Article lives on albeit a bit like the human appendix: potentially troublesome but of little practical value.

On the ground things have become difficult. Kashmir is a relatively well-off, literate land with a unique culture—the most savoury aspect of which is its delectable cuisine and the extraordinary skill of its artisans. Kashmiris view others with a dignified condescension. Others see this as arrogance. Most likely the self-satisfaction comes from inhabiting what has been rhapsodied since the Mughals as ‘paradise on Earth’.

This soporific ‘paradise’ is located at the trijunction of three countries—China, India and Pakistan—amongst whom there is an uneasy truce. This creates a false, potential choice of ‘independence’ for Kashmir. This fanciful notion once titillated the ruling Maharaja Hari Singh briefly. The India Independence Act received royal assent on July 18th, 1947, and British paramountcy lapsed. By default J&K also became independent but was advised by the departing British to choose between Pakistan and India.

The troops allocated to Pakistan were already managing the communications system in Kashmir. Sialkot (now in Pakistan) was also a major source of supply for goods and food to Kashmir. The Maharaja also signed a ‘standstill’ agreement with Pakistan as he pondered. Possibly to nudge the Maharaja along Pakistan, initially, in violation of the ‘standstill’ agreement restricted supplies to the Valley. Next ‘thousands of tribesmen from Pakistan, as well as Pakistan nationals, who were later proved to have been abetted by the Pakistan Government’ invaded Kashmir. This panicked the Hindu Maharaja Hari Singh to hurriedly accede to India on October 26th, 1947. Accession became final when Lord Mountbatten, the British Governor General, accepted it.

But the dream of ‘independence’ endures, ironically stoked by the ‘shabby’ present of Kashmir with people left devoid of mature leadership acting in public interest. An ailing Syed Ali Geelani, who now heads the Tehreek-e-Hurriyat, espouses the ideology that Kashmir is a ‘natural part’ of Pakistan.


In sharp contrast, the late Sheikh Abdullah, the hot-headed, Kashmiri progressive leader of the National Conference had stated early on during the Jammu and Kashmir Constitutional Assembly debates on August 19th, 1952, that opting for ‘feudal’ Pakistan would have been totally against the ‘social order’ and pro-poor policies the National Conference was committed to implement in Jammu and Kashmir.

Political loyalties lie where business is done. At the time of independence, the Kashmiri urban middle class were umbilicaly bound to the existing trade and supply routes which led solely via Baramulla and Muzaffarabad to Sialkot and further to Lahore (both in Pakistan now) where Punjabi trader guilds controlled the markets.

In contrast the National Conference had its electoral base in rural Kashmir where it launched a class struggle in 1931 to break up the large estates and redistribute the surplus land to landless peasant workers, very similar to the ‘socialist’ path trodden by India. The consensus at the time, within Kashmir, was to end monarchy and become a democratic state with elected government and an elected ‘head of the state’. India then, and now even more so, represents the secular, democratic tradition rather than the now-its-on-now-its-off democratic, Islamic state of Pakistan.

Building faith in the democratic intentions of the Union Government, in Kashmir, will be a long haul, possibly extending to more than a year from now. What happens, behind the scenes, during this extended period, will determine whether or not the Valley returns to constructive democracy.

It is best to be realistic. No pot of gold awaits Kashmir at the end of the ongoing lockdown. As a Union Territory, the best they can expect is to continue to get around three-fourths of their total revenue from a share in Union taxes and Union grants. What will change is that the Valley will occupy a lot more of the Union Government’s mindspace as a Union Territory. Some might call this a mixed blessing.

But to be fair to the rest of India, democracy never comes bereft of responsibility. The leadership in Kashmir has to accept combined responsibility for following rather than shaping public sentiment. Admittedly, violent extremism brooks no dissent. But it can only be dampened if military force is buttressed with positive political outreach at the grass roots. Here the fractured nature of politics in the Valley has not helped. A fractured mandate inevitably makes populists out of politicians.

There are two ways this gap can be breached. The first is what Kashmir fears: an ingress of immigrants buying up land in the Valley and changing the demographic. This fear is exaggerated. More probably the ongoing out-migration of Kashmiris for business, educational opportunities or ‘good’ jobs will intensify. But they often suffer from the growing Muslim-Hindu binary. Misguided vigilante action against Muslim Kashmiris, particularly as a reaction to militant attacks in Kashmir, needs to be curbed and actively avoided.

A democratic transition in Kashmir can start only after a new Lieutenant Governor—it is important to project a credible, humane face—is appointed as the head of the Union Territory and the Legislative Assembly gets elected. But none of this can happen unless Kashmiris exercise restraint and accept the unfortunate necessity of Police Raj for the moment. This will not be the first time they have graciously done so. Hopefully it might be the last.