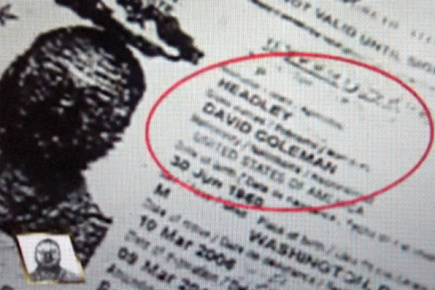 
Daood Gilani is David Coleman Headley, a suspected Lashkar-e-Toiba (LeT) operative and US citizen of Pakistani origin. He was arrested by the FBI at Chicago’s O’Hare International Airport on 18 October in the company of a Canadian citizen of Pakistani origin named Tahawwur Hussain Rana. They are suspected of planning (what else?) terror attacks in India and Denmark.

Headley is a Pakistani and US passport holder and is thought to have leveraged the latter in order to escape the scrutiny of immigration officials in India. Investigators have come across a list of 24 places in India (including Mumbai, Pune and Nagpur) that Headley and Rana were exploring as possible terror targets. It is believed that both of them visited India at least seven times between 2006 and 2008 for this purpose.

Some prominent installations and buildings thought to be on their radar are the Indian Military Academy in Dehradun, the Siddhivinayak and Mahalaxmi temples in Mumbai, the iconic Bombay Stock Exchange, Southern Command headquarters in Pune and the RSS headquarters in Nagpur.

Further, it has emerged that Headley was in regular touch with Al-Qaida field commander Ilyas Kashmiri and fellow LeT operatives in Pakistan. Among other things, he was recruiting LeT cadres for them in India under the pretext of sending migrant workers to the Middle East.

Inevitably, the question that comes to mind is, did he have anything to do with 26/11? Home Minister P Chidambaram has not discounted the possibility because Headley and Rana did visit the country several times prior to the attacks.

Finally, why Denmark? Their intended target in the land of smiles (the World Map of Happiness and the World Database of Happiness, from 2006 to 2008, rated Denmark as ‘the happiest place in the world’) was the newspaper Jylands-Posten, which printed Prophet Muhammad’s cartoons. Sad.