Mani Ratnam chanced upon him at a function to recognise excellence in the field of advertising. 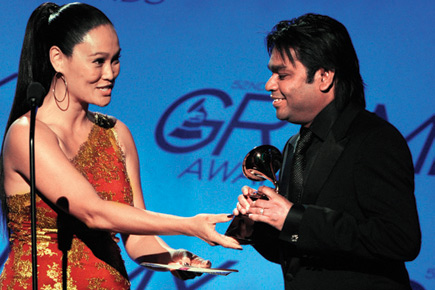 Mani Ratnam chanced upon him at a function to recognise excellence in the field of advertising.


The awards for the ‘Best compilation soundtrack album’ and the ‘Best song written for motion picture’ at the Grammys this year went to Dileep Kumar? Dileep who?

Born on 6 January 1966, Dileep Kumar and family converted to Islam in 1989 (his mother Kareema Begum is a Muslim). Dileep Kumar became Allah Rakha Rahman, who went on to become one of India’s foremost film music composers, popularly known as AR Rahman. Let’s attempt an impossibly quick look at the long list of achievements in a remarkably prolific and mostly brilliant career.

In 1991, Mani Ratnam, one of India’s top directors, was looking for a new music composer. While attending an awards function to recognise excellence in the field of advertising, he chanced upon the self-effacing Rahman, who had just won the award for best jingle for Sharada Trilok’s commercial for Leo Coffee. Sharada introduced Rahman to her cousin (Mani Ratnam) who was so impressed that he signed him for Roja (1992). Six months later, Rahman was on his way. And how!

Already, Rahman has 13 Filmfare Awards, four National Film Awards, a Bafta, a Golden Globe and two Academy Awards to go with his most recent double-win at the Grammys for Slumdog Millionaire’s music. This year, he was also presented the country’s third-highest civilian honour, the Padma Bhushan, by the Government of India.

After his win at the Oscars, Time magazine called him the ‘Mozart of Madras’ (gleefully lapped up and spouted by newspapers in India). He is also known, mostly in Tamil Nadu, as Isai Puyal (music storm). Understandably, the former moniker has gained wider currency. In 2009, Time named him one of the 100 most influential people in the world. Not bad, I say, for a quiet kid from laidback Chennai!

And did you know that in a deliciously cinematic twist of fate, the man born as ‘Dileep Kumar’ happens to be married to a beautiful lady named Saira? (For the shockingly unaware, the legendary Indian thespian Dilip Kumar was born Muhammad Yusuf Khan and is married to Saira Banu.) Finally, if you’ve never heard of Rahman or his music, a good place to begin would be where Mani Ratnam did: Roja. Now, go play.