For about $100, the phones will now feature a quad-core processor and a long battery life, with Google’s assurance of quality 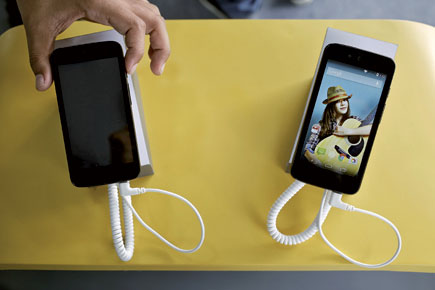 For about $100, the phones will now feature a quad-core processor and a long battery life, with Google’s assurance of quality

Sensational phone launches by multinationals like Apple take months to snail their way into India. But that just changed this Monday. Android One, a new platform by Google for cheap high-quality smartphones, was launched in India—a first of its kind. Three phones have been unveiled—by Spice, Karbonn and Micromax—running on the platform, all priced between Rs 6,300 and Rs 6,500.

What Android One does is set a minimum hardware and software specification for manufacturers, giving Google control over the quality of the smartphone. So, what one expects of high-end smartphones will now go down to the bottom of the rung. For about $100, the phones will now feature a quad- core processor, a long battery life, dual SIM cards, automatic updates to Android, a Newsstand that can download Hindi publications, plus an ability to download YouTube videos and more.

This is all done with a view to tap the phenomenal mobile phone user market in India and other emerging countries. If Google succeeds, then there is a river of gold waiting for it, considering the millions of potential users. It is also the reason that India was chosen to launch Android One. Rs 6,500 might still be out of reach for the vast majority, but with prices dropping and wages increasing, a mass smartphone revolution is not far away and Google wants Android One to herald it.

Android One is helmed by Sunder Pichai, senior vice president of Google, who is of Indian descent. In his blog, he wrote about the future of Andorid One: ‘We expect to see even more high-quality, affordable devices… Finally, we plan to expand the Android One program to Indonesia, the Philippines and South Asia.’