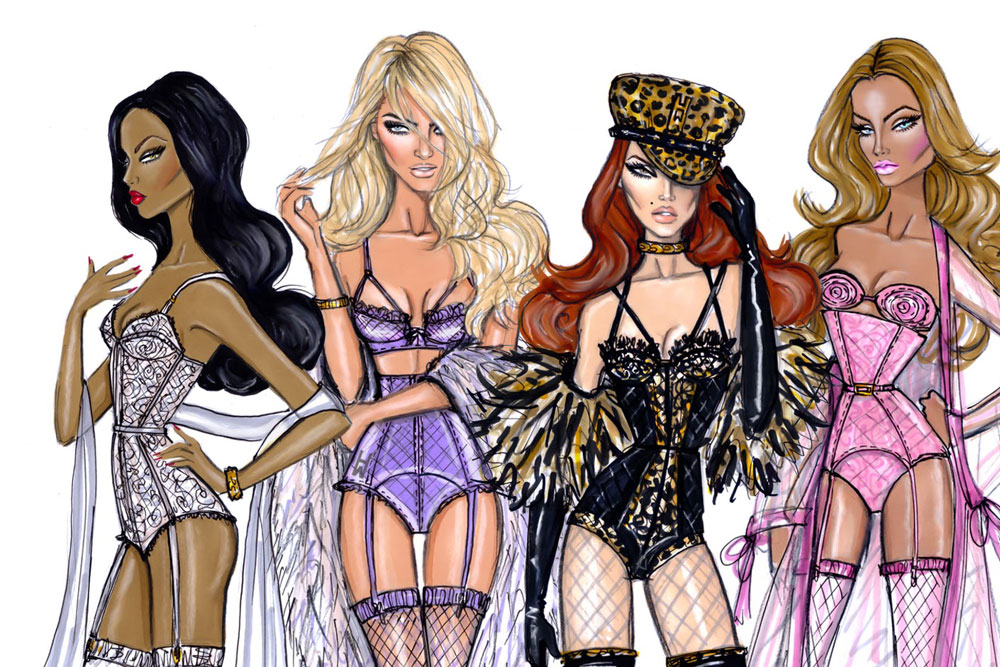 “I miss granny panties,” snarled my date as the eighth hook of a camisole dug into his thumb, drawing blood. I hid my smile. There’s nothing funnier than watching a man attempt to conquer modern lingerie. “I don’t like it. The thing is spoiling my erection,” he grumbled. It wasn’t. As frustrating as the 12 hooks and straps were, my Very Sexy Chantilly Satin Plunge Teddy from Ann Summers was known for having warmed up a 50-year-old waiter in the middle of winter. “Wear something simple next time,” he advised. I wasn’t. I’d fallen for that line before.

It had happened years ago. I was new to underwear politics. One night I bought a guy friend’s advice and instead of fishing through my collection of thongs, bullet bras, bustiers and babydolls, I put on a pair of full-bottomed panties. And then went out on a date. Now after years of squashing, pinching and poking, complete coverage turned out to be surprisingly uncomfortable. The cotton was too soft, the elastic too loose and two hours into the evening I started to feel as attractive as baby Daffy Duck in diapers. But still, this was what men wanted right? Simple, plain, old-fashioned. Except that it wasn’t. Later at night, the guy took one look at me and exclaimed in real horror, “Are you wearing another man’s boxer shorts?”

I learned something then. Simple is anything but simple when it comes to underwear. Men want lingerie that may be simple to unfasten but certainly not simple in design, cut or material. It has to be seductive yet straightforward, flirty yet functional, provocative and the entire thing should come off in less than a minute. The undergarments, like the woman, are best when sexy and submissive. And that was just what Roy Raymond was thinking when he walked into a US supermarket to buy lingerie for his wife. He certainly didn’t want the joyless bras that had been designed to support women as they took on heavy work during World War II. And so he started Victoria’s Secret in 1977, a retail and mail order service that would allow men to invest in pretty, slinky, easy-to-slip-off lingerie for their partners. The hooks, buttons, straps, belts and buckles weren’t thought of by him, or indeed any other man. They came much later, as lingerie continued on its long journey from ‘simple’ to ‘not so simple’.

Traditionally men and women both wore undergarments as a sign of wealth and social status. In ancient Egypt, citizens of higher ranking would wear tunics fastened by a single shoulder strap. Slaves and servants either wore a loincloth or nothing at all. Greece saw the entry of the first corset in 2,000 BC meant solely to make the bust appear fuller and rounder. A hundred centuries down the line, the Renaissance came about and with it the tit-enhancing corset was replaced by one meant to restrain and flatten the torso. The Victorians were ironically the first ones to jazz up this cramped corset. They invented the elastic corset which offered complete comfort. Embroidery, ribbons and lace also began to appear on undergarments, finally giving the ladies a chance to secretly decorate their bodies, and their partners something to look forward to. Men too began to put on their share of elaborate underwear during this time. But unlike the crotchless panties that were given to women for ‘hygienic reasons’, theirs was closed-crotch.

Corsets were eventually given up as more women began to participate in outdoor activities, especially during the two wars. Then in 1913, one woman, Mary Phelps Jacob, decided to tie two handkerchiefs together with a ribbon and use that to cover up a tear in a sheer dress. The invention turned out to become the world’s first bra and Jacob made a small fortune selling them to friends and family. With the bra, came the death of granny panties and bloomers as well. By the end of the 19th century flapper-style panties began to resemble the bikini-styles we are familiar with today.

These days no one uses underwear as a status symbol, out of modesty or to alter their outward shape anymore. Functionality may seemingly have given way to undergarments becoming nothing more than a tool for teasing. But they have in fact evolved to play a far more important role. Convoluted, complicated and cumbersome, contemporary lingerie gives women some much-needed control in the bedroom. At a time when sex comes before conversation, making sure our second skin doesn’t come off in less than 60 seconds is the only way to keep men wanting and waiting. Several of my girl friends won’t think twice before shedding their clothes on the first date, sometimes even before finding out a person’s age and profession. But they’ll make sure their bras and panties do the work that questions and jousts once did–testing how far a man will go for them. Every loop untwisted, every band untangled, every button opened is proof of both his patience and his worthiness.

“How else are you supposed to know if they’re good enough?” declared a friend after a particularly bad date. For years now she’d been scribbling short quizzes all over her lingerie, expecting her lover to answer each question before he could take them off. “Complicated lingerie is expensive to buy. So I make my own,” she explained and proudly displayed a pastel pink G-string that said ‘Are you married? Are you a criminal? Do you eat meat?’ right on the crotch. The words had become her clasps, bows and ties, protecting her against the fast-pace of casual sex today. Some men understood and answered the quizzes. Others, like the one from last night, didn’t. “He thought I was trying to trap him into marriage. As if telling me two lines about yourself is a shortcut to the altar,” she laughed, took another sip of wine and added, “Nevermind. He wasn’t worth it. And it was his loss.” Since she’d thrown the man out pantless in the middle of the night, I guess it really was.

As for me, I might not subscribe to the Panty Quiz school of thought but there are other, less-drastic ways to keep men hanging. Satin underwear. It’s slippery, it’s cheaper than lace and equally sexy. If someone really wants me he can take the time to untie all my knots. Men can escape the flowers, dinner and diamonds today but they can’t run away from the bolts on the garter belt. The good news is, despite all their complaints, some guys do end up enjoying the challenge. And then they come back for more. After all, sex and complication is so much hotter than sex and simplicity.