The third edition of Difficult Dialogues highlighted the ways gender equality can be achieved. In an exclusive interview Dr David Osrin tells Nandini Nair why violence against women is a public health issue 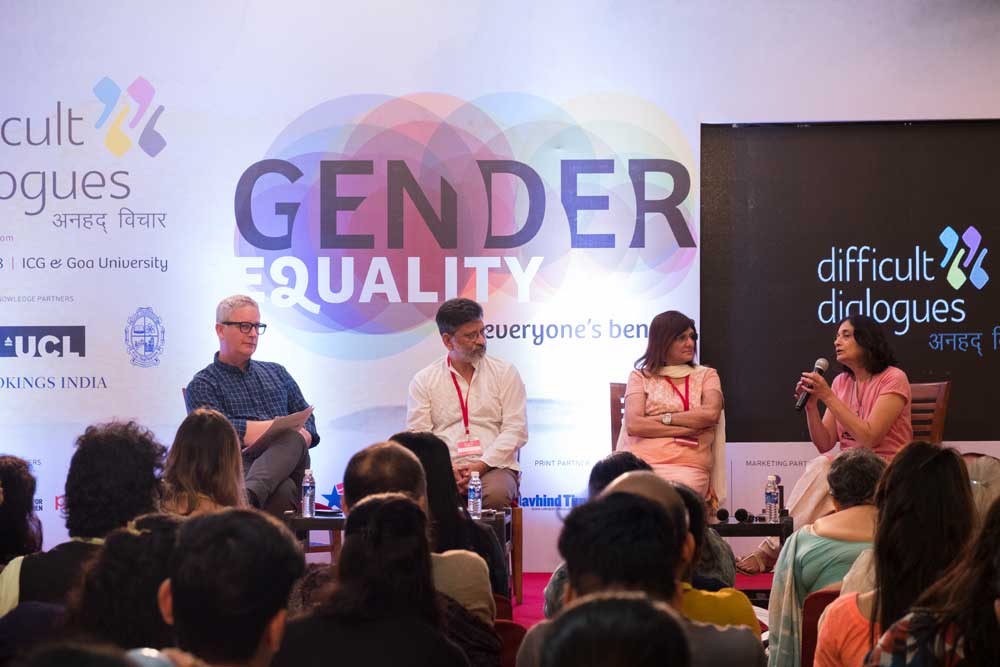 Not all conversations are created equal. Some never rise above platitudes, while the rare few leave your brain buzzing. At Difficult Dialogues 2018 one was fortunate to see plenty of the latter, and a few of the former. Difficult Dialogues is an international annual conference held in Goa that delves into the foremost issues facing South Asia. Over three days, the forum hosts discussions between diverse stakeholders. While Difficult Dialogues 2016 dealt with ‘global finance and civil society’, 2017 explored topics around health, it is little surprise that this year the focus was ‘gender equality’.

This year, the forum was held in partnership with University College London (UCL), Goa University (GU) and was held at the International Centre Goa (ICG) from 9th to11 February 2018. Founded by philanthropist Surina Narula, and with director Ororon Das at the helm, it has become a forum for the serious and honest exchange of ideas and opinions. The intimate venue and the balmy Goa weather allowed both speakers and audience members to drop their guard and speak freely.

The speakers this year included the likes of writer-diplomat Pavan K Varma, political leaders Shazia Ilmi, Renuka Chowdhury, and Jaya Jaitly, lawyers Albertina Almeida, Salman Khurshid, Flavia Agnes, Vrinda Grover and Sara Hossain. Others in attendance were actors Nandita Das and Gabriella Wright, and filmmakers Ketan Mehta and Prakash Jha. These are just a few of the names in a list of panellists that was erudite and diverse.

The forum also went beyond the conference paradigm, by holding workshops around issues of gender. Bulbul Sharma conducted a session where she asked children to paint their concepts of gender, while documentary filmmaker Rahul Roy focused on the dynamics of power and the experience of violence for both men and women. Another interesting initiative is Daring Debates, which encourages students from different backgrounds to grapple with the issues of the day. This year’s topic ‘masculinity affects gender equality’ saw inspired participation.

One of the standout sessions this year centred around the topic of ‘gender masculinities and violence’. The panel members included Professor of Global Health, UCL, David Osrin; Director SNEHA Nayreen Daruwalla; documentary filmmaker Rahul Roy and feminist publisher Ritu Menon. With each speaker outdoing the other in passion, some of the concerns that were raised included—does masculine behaviour include violence; the harmful effects of patriarchy on men; the connections between sexism and the status of women in society; the relationship between masculinity and risk, labour and risk; the links between female sexuality and patriarchy; and struggle as politics.

At the end of the session, we caught up with the moderator David Osrin who has trained as a paediatrician and spent the last 20 years researching interventions to improve population health, especially involving community mobilisation in South Asia. He spoke about his areas of research, which include newborn survival, maternal health, and childhood nutrition. Excerpts from the interview:

How did you start working in India?

I was a paediatrician. But I’d always wanted to work with health in other countries. And I never really ever conceived of this as a project of the ‘global south’. I just like living in different places. And as I was training I did a lot of internships in various places, such as Bangladesh, and then I studied in Thailand. I ended up actively seeking research work in the region. I got a job in Nepal in 1998 around the survival of newborn babies. I moved to Nepal with very little planning and spent six-seven years there. I worked on community participatory interventions, what we might now call ‘community mobilisation’, to improve survival of babies. I love that work. Then I met SNEHA (Society for Nutrition Education and Health Action) in Mumbai. I relocated to Mumbai in 2003-04. Here was a group of people looking at the survival of newborn babies in informal settlements or slums.

Once in that hyper urban context I became very interested in urban health. And even before that I was easily convinced that babies are intimately connected to their mothers. Mothers are women. Women live within households so I became interested in the social and micro social political aspects around community mobilisation and health. It was an easy step to start to work on gender-based violence. It was really stimulated by the strength of the group at SNEHA. I was a baby on that subject and they educated me and I continue to be inspired by their passion and belief in the justness of their cause.

There are certain areas that more inherently political than others. And the survival of newborn babies and the South Asia wide focus on maternity is essentially apolitical, in the sense that no one is arguing against it. It is political in the sense that it is a vote winner. In that sense it is political with a small ‘p’. But gender-based violence is inherently political, and a lot of the discussion this morning (at the session) was how it has come to be depoliticised.

What have been your own stepping stones from your study of child mortality to gender-based violence?

In practical terms, child mortality, we realised, around 20 years ago, was driven by baby mortality and that had been overlooked. So partly what we did, part of our agenda was to put it out there. A certain number of us were putting this out there. So that there is a newborn baby action plan, and so every state has a newborn plan and policy.

Then we came to the realisation that this goes beyond, to issues of gender, and explicitly linked to newborn issue is the deaths of females. Maternal health leads inextricably to women’s health. Maternal health is linked to reproductive health, and choices, and household structures, and family structures. Another thing that became clear to me is that true to the work of my colleagues, this problem of gender-based violence is a huge public health problem. And the problems of violence against women and girls directly affects women’s mortality, maternal mortality, newborn mortality, still birth while pregnant, the issue of abortion, the issue of growth and development of children. So that it is all bound up in one thing.

So if you take a kind of social view, of health, which I do, you are blind if you do not acknowledge the issue of violence against women. And people like Nayreen (Daruwalla, Director at SNEHA) have been saying this for 20 years—violence against women is a public health issue. And people didn’t listen. And now they have. So major national and international research and health funders will fund these kinds of efforts.

There are all these other issues of wealth and poverty, power and control, class, communal politics that are part of all this.

How does India compare to other South Asian countries in issues of health, is it falling behind?

We are 1.2 plus billions people. Public services in India are among the hugest in the world. People for example always say the ICDS (Integrated Child Development Services) is the world’s largest public sector project. And you have to think about that. If you are dealing with a subcontinent and such a large number of people, it is not going to be easy. However, it has been too long that we’ve seen not much change.

But globally things that have come to light in the last 20 years (maternal mortality, newborn mortality, child deaths) have improved.

When we talk about ‘falling behind’, we mean a slowing of the improvement. And perhaps a relative falling behind other countries in the region. A good thing in India is that we are conscious of these problems. But a problem is taking things up to scale through the machinery that we have is difficult.

It is felt that the NRHM (National Rural Health Mission) has been fairly successful. It does seem to have made gains, but yes, there need to be improvements. And I can hope that will show in the statistics.

Can you tell us about the work of SNEHA?

SNEHA works on women and children and it is across a gambit of things, maternal and newborn child care, childhood nutrition, secondary health, adolescent health, and violence against women. We are now expanding our activities, Nayreen’s team has been doing this for 18 years. Over the last five years, it is time to look back and see what worked. A lot of what we’ve been doing is rationalising what we do in a theoretical way.