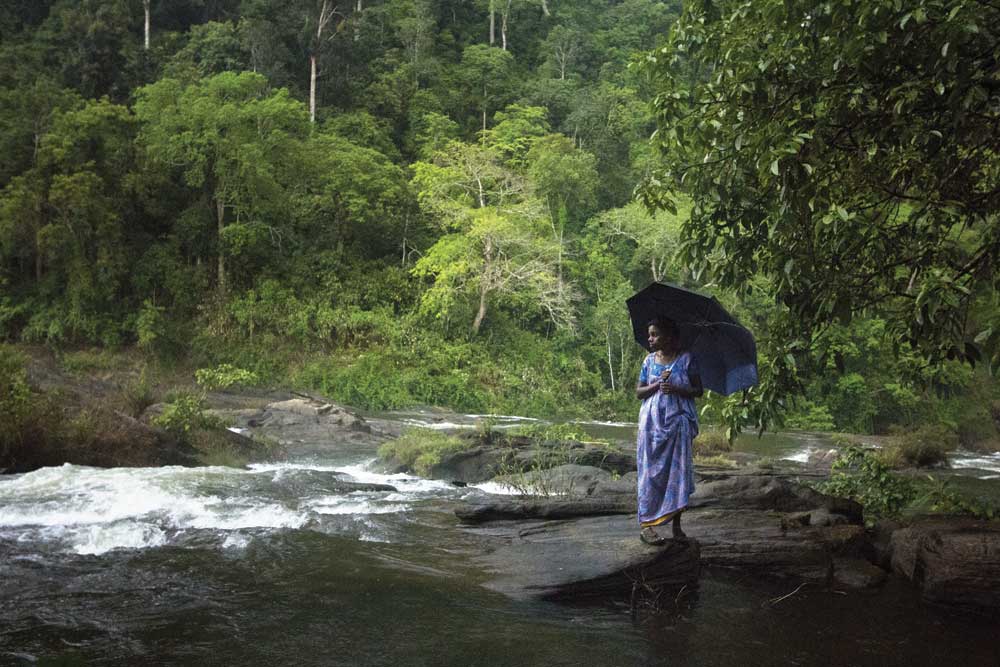 THE BEDTIME STORIES that VK Geetha had heard as a child were those of displacement, uncertainty and violence. Her father had lost his home thrice, each time to make way for the construction of a dam deep inside the forests of Kerala. Geetha, now 30, is the first woman chieftain of a tribal community in Kerala. She is determined not to allow her community to be displaced a fourth time—for the proposed hydro-electric Project at Athirapally. The chieftain of the Kadar community that lives within the Attappady Reserve Forest in Vazhachal, she is well-versed with the Forest Rights Act, according to which a dam cannot be constructed without the consent of the tribes that stand to be affected.

The first from her village to have completed Class X, Geetha, who went to a boarding school in Palakkad, has come a long way, and her journey runs parallel to the story of the resistance against the proposed hydro-electric project. So much so that she cannot talk about herself without talking about the history of the struggle. The single reference that punctuates her story is that of Dr A Latha, an environmentalist and chairperson of the Chalakudy Puzha Samrakshana Samithi. “Latha chechi inspired me to work for the tribe,” says Geetha, who grew up listening to Dr Latha discuss the project with her father. “She would ask him about our ancestors, about the community’s livelihood, history and culture. I couldn’t understand what they were talking about then. But later, I learned that Latha chechi was concerned about our rights and our survival,” Geetha says.

When Geetha was still a teenager, she read a copy of the damsite study report prepared by the TBGRI (Tropical Botanical Garden and Research Institute). “It was in English and I asked for a copy in Malayalam. When I read the translated report, I was taken aback. It was a pack of lies. It said there were no inhabitants within the project area. It did not acknowledge the 72 Kadar families who live in this colony,” says Geetha. With the beginning of the legal battle to establish the community’s right to live, her life changed forever. She wrote to the then Forest Minister of Kerala, Binoy Viswam, exposing the facts left out of the report. She also filed a complaint with the then Union Environment Minister Jairam Ramesh, who issued a show cause notice to the Kerala State Electricity Board.

Athirapally Falls, situated 1,000 ft above sea level on the Chalakudy River, at the entrance to the Sholayar ranges of the Western Ghats, are a big tourist destination in south India. No other development project in Kerala has generated as much opposition as the 163 MW Hydro-Electric Project across the Chalakudy River in the Vazhachal forest division .The proposal was first put forward by the Kerala State Electricity Board in 1996 and the environmental clearance was issued in 1998. Right from the beginning, the idea of a new dam submerging 136 hectares of forest, uprooting hundreds of tribal people, had faced resistance from all corners, especially from the four major tribal communities in the area—Malayas, Mannans, Kadars and Muthuvans. They had been displaced in the past during the construction of the Parambikulam Aliyar, Peringalkuthu, Sholayar, Mangalam and Thunakadavu dams. Following a series of public interest litigations, the Kerala High Court suspended the Athirapally project’s environmental clearance in 2001. But clearance was re-granted in 2005, and this time, Geetha took up cudgels. The High Court once again quashed the environmental clearance for want of due procedures including public hearing on a set of petitions filed by Geetha and some others.

A woman chieftain is a rarity. Geetha, who is an anganwadi teacher, was chosen for the role in 2014. The chieftain’s job is a demanding one—he or she has to sign every marriage, death, community identity and income declaration certificate in the community, resolve internal issues, and represent the tribe’s interests before the world. The unconventional choice of a woman to lead the tribe has paid off. Thanks to Geetha and other activitists, the Kadars have obtained titles under the Forest Rights Act of 2006. The community is listed as a Particularly Vulnerable Tribal Group under the Act, which means that no project can be implemented without prior approval from their Oorukoottam or Gramasabha. In 2015, the tribal community moved the High Court, saying the project infringed upon their rights under the Forest Rights Act, and that the government could not proceed with the project. The petition is pending in the High Court.

As far Geetha is concerned, the interests of the community dictate all her decisions. If someone marries outside the community, they are no longer allowed to live within the forests. “They are however, allowed to come meet their parents any time they want to. Geeta has a rational explanation. “We have had outsiders coming and settling here in the past and they only brought destruction.” Geetha’s uncompromising battles against liquor and the dam have ensured that she has made enemies of people in power. But she is not afraid. “The community is with me and I am with them,” she says. “The tribes of Vazhachal are united as one. It will not be easy to uproot us.”