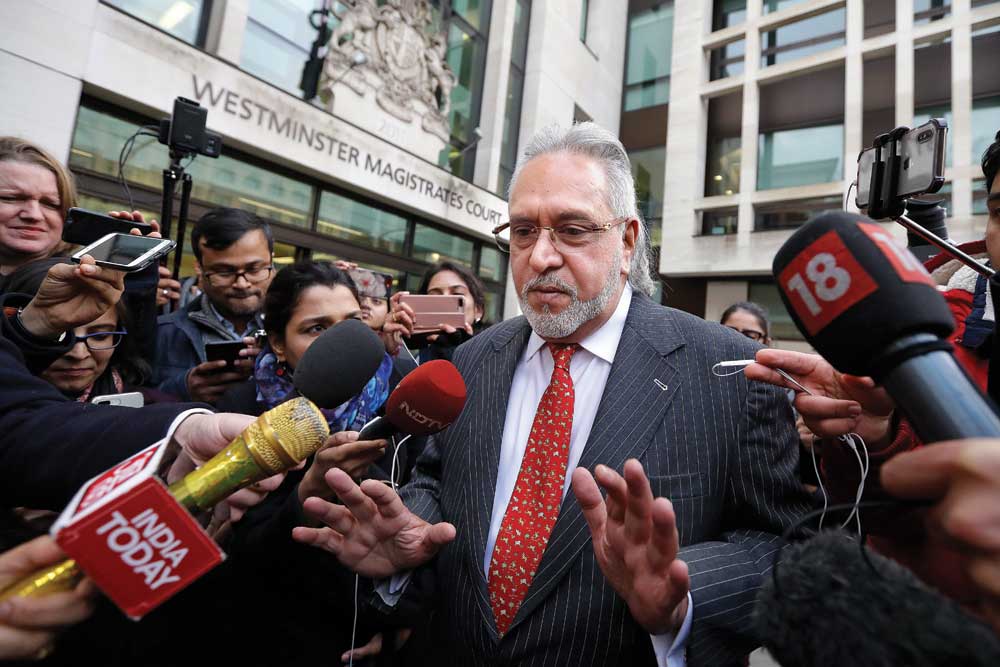 ALMOST IMMEDIATELY AFTER the extradition of Christian Michel, the alleged middleman in the AgustaWestland chopper purchase case, Vijay Mallya, founder of the erstwhile Kingfisher Airlines, tweeted, ‘Respectfully to all commentators, I cannot understand how my extradition decision or the recent extradition from Dubai and my settlement offer are linked in any way. Wherever I am physically, my appeal is ‘Please take the money’. I want to stop the narrative that I stole money.’ A week later, after a London court cleared his extradition from the UK, the threat has become very real. Not that he is going to be on Indian soil anytime soon. There are plenty of judicial appeals to exhaust before that.

Is Mallya really a criminal? If you go by public opinion, then there is no doubt which way the narrative swings. For a man who relentlessly dazzled the media by flaunting what it craves—opulence and glamour—his takedown has also been led by the same instrument. Television channels, hostage to the vicious grip of TRPs, found in his fall a readymade ratings booster. Mallya was a creature of the visual age, his yachts, mansions and the bikini babes of the Kingfisher calendar forced into drawing rooms to hypnotise a poor nation with the trappings of wealth. It was a fantasy that he sold, in the beginning perhaps as surrogate marketing for his liquor brands that couldn’t advertise openly. But he was also inherently built in that mould where exhibition took over reality. Otherwise, there is little to explain the foray that eventually brought him down and made him flee.

The aviation business is responsible for the flattening of a lot of fortunes. Mallya’s liquor business, based on large volumes and small margins, was turning vast amounts of profits when he decided to launch an airline. He thought big, buying out Air Deccan even while losses were accumulating. The anticipated consolidation in the sector, with just one or two players who could then drive prices up to make profits, never happened. Fuel prices, which have a direct correlation with operation expenses, spiked. Recession hit the world in 2008. By the time Mallya threw in the towel, Kingfisher owed banks around Rs 9,000 crore.

Mallya is correct when he says that this is a fraction of what some other industrial houses owe. And in trying to cheaply get out of the payment— his initial terms of settlement were paltry—he was probably only gaming the banking system like big business has traditionally done in India. What made him ready fodder for media campaigns was that even while in deep distress, his flaunting of wealth did not diminish. Public relations in India is essentially a morality play. Smart people know when to get out of the public eye in times of trouble. Failure, especially when Rs 9,000 crore has been lost, must look like failure. Mallya seemed too conditioned by opulence to appreciate that. It is only now that he appears to get it, but it is too late.

Kingfisher also failed a few years too early. India finally got a working bankruptcy law in 2016, which gave businessmen an honourable way to exit. Today, Kingfisher would just have gone on the block and the rest of his business holdings might have survived. Now, Mallya says that he is willing to pay back everything he owes, and, if genuine, this is an eminently reasonable offer that benefits all. But no politician in India will take it up because it could damage their reputation. Mallya could just return the money without any pre-conditions. That might be the only thing that could salvage his public image. But, first, he needs to have the money. And then the character to take a Rs 9,000-crore gamble.