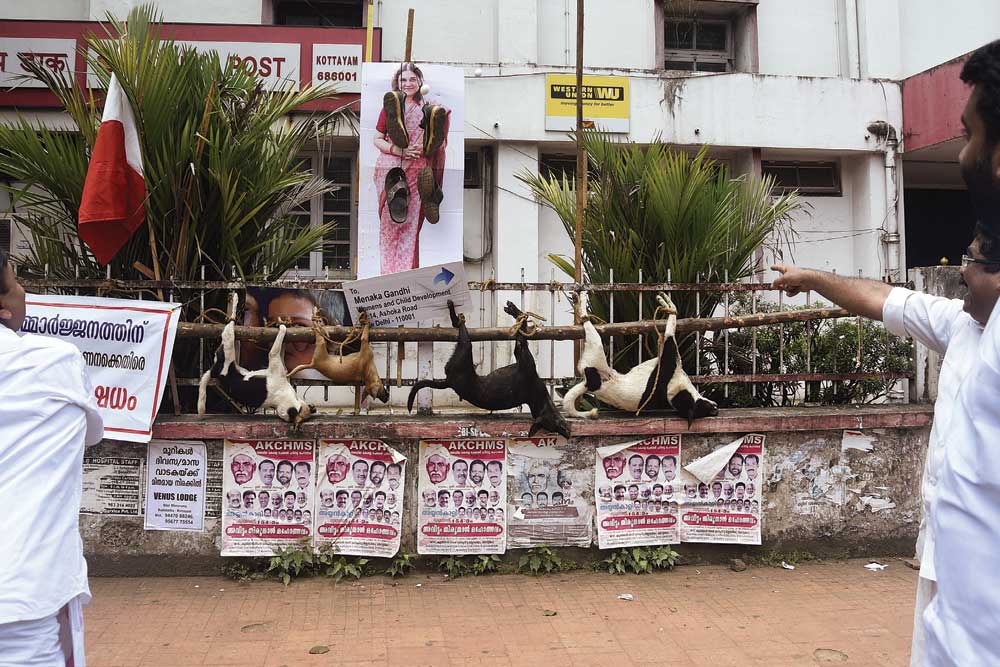 SEVENTEEN PEOPLE FROM a gram panchayat in Kerala found police cases registered against them for killing 22 stray dogs on 28 September. Towards the end of last month, the state also woke up to images of activists of a political party walking around Kottayam with the bodies of 10 dogs hung on a pole. A petition on the stray dog problem in Kerala even went all the way up to the Supreme Court, which advised taking a middle path that would both address the issue while showing compassion for canines.

Peculiarly among Indian states, there is little tolerance in Kerala when it comes to dealing with stray dogs. For many years now, one of the state’s biggest industrialists, Kochouseph Chittillapilly, chairman of V Guard Industries, has been running a campaign to eradicate stray dogs. Ever so frequently, stray dogs make headlines. There are often reports of their having taken human lives, just as it makes news when dogs are killed by people.

By officials figures, around 100,000 dog bite cases were reported in 2015-16, and the state’s stray dog population is estimated at 250,000. Several theories have been floating around of why the stray dog menace has become such a cardinal issue in Kerala. “It is the garbage that we throw on the road coming back to bite us,” says Murali Thummarakkudy, a safety expert who blames poor waste management systems for the situation becoming unmanageable. The state’s high population density is another factor. Welfare of Stray Dogs, a Mumbai based non-profit organisation, holds the view that the size of a local stray dog population corresponds with the size and character of the human population of that area.

However, not only are a high population density and poor waste management not unique to Kerala, nowhere else does the issue of stray dogs get quite so politicised. The media giving it wide and loud coverage is a factor. Television channels and newspapers tend to carry reports of dog bites in abundance.

In August, when a 65-year-old was mauled to death in Thiruvananthapuram by stray dogs on her way to the beach at night, it spread an atmosphere of fear throughout the entire state. “How can we send our children to school?” asks Mini Raju, a local self government member of Njarakkal, a coastal panchayat in Ernakulam district. She has been in the news for leading a movement to kill stray dogs in her panchayat area. A case was registered against her and she secured bail. “Children are scared to go to school. The roads are taken over by stray dogs in groups, especially in the mornings and evenings. The security of our children is more important than animal love,” argues Mini Raju. Despite being booked for culling dogs, she sticks to her stand. “I will not run away if the people of this panchayat take the initiative to kill dogs. I will go with them.”

A recent statement by local administration minister KT Jaleel declaring that the government is going ahead with the mass culling of dogs has created an uproar among animal lovers. Chief Minister Pinarayi Vijayan later made it clear that the government had no such plan. While such controversies go on, more and more dog bites get reported and highlighted in the media.

“Street dogs have become a threat to the people since 2001,”says Justice Siri Jagan, a former judge of the Kerala High Court who heads the committee appointed by the Supreme Court to prepare a report on the magnitude of the problem. “Before 2001, [panchayats] used to kill stray dogs and keep their numbers low. The Animal Birth Control (ABC) amendment rules came into existence in 2001 after which they stayed away from the mass elimination of dogs.” However, Justice Siri Jagan is against the large-scale killing of street dogs. According to the 2001 amendment of ABC rules, culling is allowed only for two canine categories—those which are fatally wounded and those which are incurably ill.

The committee headed by him recommends the use of effective birth control measures. The preliminary report suggests that a proper system of sterilisation and vaccination be adopted alongside the licensing of domesticated animals with proper vaccination, deployment of properly trained medical officers and effective waste management.

The government claims that it has resumed ABC measures but many panchayats continue the culling of stray dogs. The Kalady panchayat in Ernakulam district killed 24 dogs, the latest in the series. The panchayat officials claimed that there was no practical solution other than this.

On the other hand, the Kozhikode district panchayat has started implementing ABC measures. It is seeking the assistance of professional agencies and setting up as many ABC centres as possible. Babu Parassery, the district president, says that they have received a positive response from animal lovers who want to help create conditions for the peaceful co-existence of animals and humans in the state.