The Rise and Fall of Binny Bansal 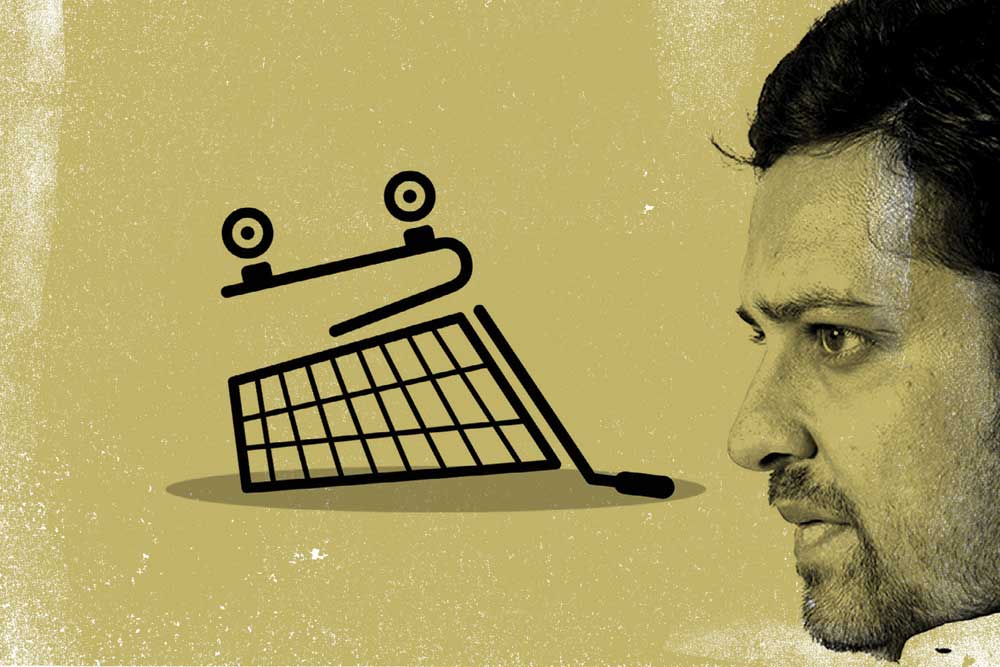 WHEN JEFF BEZOS came to India in 2014, he chose to announce his arrival with an unusually theatrical flair. Not at all keeping with his character of a hard-nosed businessman, he arrived at a press conference outside a shopping mall in Bengaluru standing atop a shiny yellow truck. He was dressed like an Indian groom in a Karan Johar film, a cream salwar suit and red sash, a large smile on his face, and was carrying with him a large replica of a cheque—the sort distributed as prize money at the end of a cricket match—made out to Amazon India for $2 billion. The founder of Amazon was advertising his confidence in the Indian market. He was also sending a message to his company’s rival.

And there was good reason for it. Because when he reached India, the man who was soon to become the world’s wealthiest man found himself being taunted. Flipkart had gone to town putting up billboards with big advertisements at key spots all around the trail of Bezos’ local itinerary: near the airport, along his highway routes, and the metropolitan area around Amazon’s Bengaluru office. This was no ordinary campaign, the kind that’s commonplace in newspapers. It was a dare, a declaration of Flipkart’s market leadership.

The posers of the challenge were the two young men who had once been Amazon employees themselves: the two Bansals from Chandigarh, Sachin, 42, and Binny, 37, who had rapidly built Flipkart into a mega-retailer since its 2007 launch. Now that Amazon had come in, with its reputation and deep war-chest of cash reserves, the two weren’t going to throw the towel in. And although rivalry between these two e-commerce firms still goes on, Binny’s departure from Flipkart now brings to a close one of the most audacious stories in Indian entrepreneurship.

Both founders have had somewhat unceremonious exits. Sachin left bitterly when Walmart bought a majority stake in Flipkart some months ago, selling his entire 5.5 per cent stake. Binny has now resigned over allegations of a ‘serious personal misconduct’ (according to media reports, allegations of sexual assault), whose veracity Binny disputes. He is still a shareholder and retains his place on the board. The complainant is a former Flipkart employee who quit in 2012 and came in contact with Binny again in 2016 when she started an event management firm. She made a complaint in 2016, according to reports. By this time, Binny had taken over as Group CEO. Earlier this year, after Walmart announced it was picking up a 77 per cent stake in Flipkart, she approached the American retailer. A law firm that reportedly investigated the matter could not corroborate the allegations, but uncovered what Walmart has termed ‘other lapses in judgment and a lack of transparency in how Mr Bansal responded to the situation’. Walmart’s concern appears to be Binny’s non-disclosure of the allegations against him—and the reputational risk it entailed—when it began its negotiations with Flipkart.

“[Binny and Sachin] no doubt changed the retail space in India,” says Harminder Sahni, managing director of Wazir Advisors, a retail consultancy. “They brought in the new wave of e-commerce, and it’s remarkable how they raised capital again and again and withstood the onslaught of Amazon.” The two also changed the way Indians shopped. Before Flipkart, very few people thought Indians would be willing to buy things online, especially electronic items. The issue of trust was too big an obstacle. “They brought in things like cash-on-delivery [to work around that]. If there is a good idea somewhere, you must bring the people in, you must ask them to try it. They did that and it changed things,” he says. “They laid down the benchmark in customer service. The perception about them, their responsiveness, and the price of course was really good because they were competing with Indian standards.”

The Bansals were the poster-boys of the Indian startup ecosystem and ambition. Sachin was seen as the more intuitive of the two, the person with the big picture in mind, while Binny was the quieter, calmer entrepreneur. Often referred to as ‘the other Bansal’, Binny was interested in running the day-to-day operations of the company.

It was just 11 years ago that the two started Flipkart in a small apartment in Bengaluru. They first thought of an online shopping comparison website. But they dropped the idea because all e-commerce websites were so lousy then. Instead, they started Flipkart as an online bookseller, just as Amazon had begun. Along the way, they changed their business model, acquired other companies, attracted investors, and grew and grew and grew. Their success inspired other entrepreneurs with ideas of ‘disrupting’ entire business sectors.

“They were really stupendous,” says a retail expert who requests anonymity. “The only time they were confused a bit was towards the end. They didn’t know when to exit. I don’t know about the charge [of sexual harassment], but Binny should have left when Walmart picked up the stake… But I don’t fault them. There was so much on the table.”