The Return of Anna Hazare 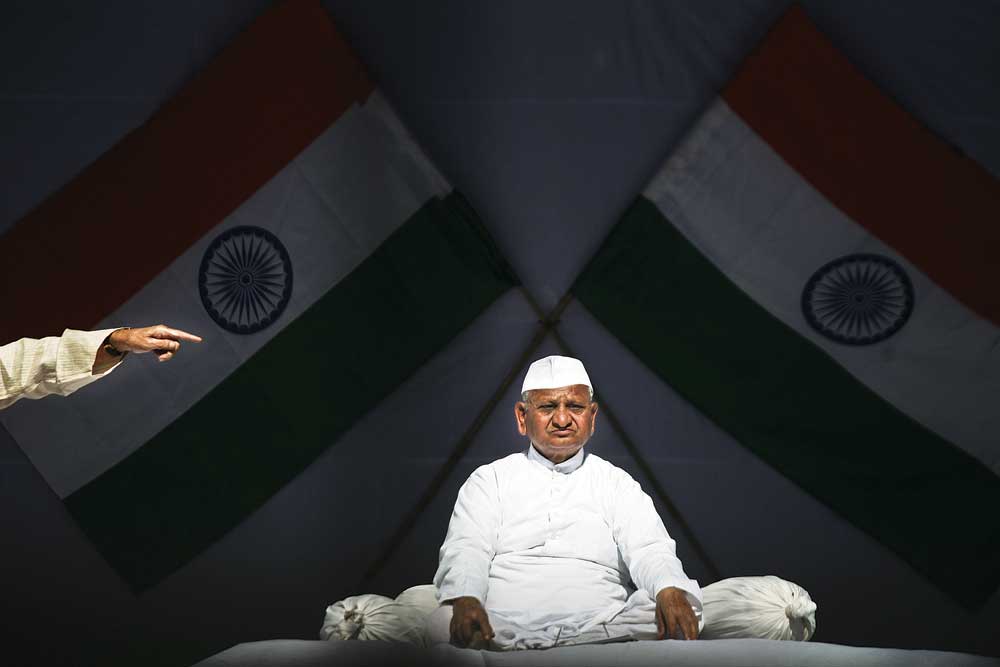 HIS LIEUTENANTS DURING the India Against Corruption movement have gone on to assume important public personas—Arvind Kejriwal is Delhi’s Chief Minister and Kiran Bedi is now Lieutenant- Governor of Puducherry—but Anna Hazare, the patron chief of this movement who could once shake governments merely by not consuming food, remains largely a forgotten man. After a long hiatus from public life, Hazare now plans to make a comeback. This time, he is focused on something he embarked upon long ago in his village of Ralegan Siddhi: the prohibition of alcohol.

Hazare will be travelling throughout Maharashtra once the monsoon ends in support of an anti-alcohol mass movement driven primarily by women. He wants people to help him pressure the state government to impose prohibition throughout Maharashtra. According to him, sexual crimes and violence against women in India can be traced primarily to alcohol consumption. “Alcoholism is the root cause of it all. Inebriated men, youths and even teenagers are committing very violent rapes. Look at the Khopardi rape of a minor girl. All the men were drunk,” says Hazare, referring to the case of a brutal sexual assault and murder that took place in that village in July. “A ban on alcohol is a must and we will not rest until we achieve it in Maharashtra. I will make it into a huge people’s movement with women leading it. The state government has to think whether the lives of the women and little girls in this state are important or the revenue from sales of alcohol.”

Hazare met Chief Minister Devendra Fadnavis some weeks ago and held discussions on the possibility of declaring Maharashtra a dry state. The state government has ruled out a blanket ban but has indicated it may adopt a model followed in Tamil Nadu and ban the sale of country liquor. Liquor sales generate estimated annual revenues of Rs 13,000 crore for Maharashtra. State Finance Minister Sudhir Mungantiwar feels that if country liquor is replaced by cheaper versions of foreign liquor, the move may actually increase revenues. “Tamil Nadu follows this pattern and all liquor shops there are owned by the state, generating estimated revenues of about Rs 23,000 crore annually,” says Mungantiwar.

At present, there is a ban on liquor in the Wardha, Gadchiroli and Chandrapur districts of Maharashtra. While the Wardha ban dates back to nearly four decades as Mahatma Gandhi’s Sevagram Aashram is located there, and the ban in Gadchiroli about 24 years ago, prohibition in Chandrapur was implemented only this year. Women’s groups in Bhandara, Nagpur, Yavatmal, and the temple towns of Pandharpur in Solapur district and Tuljhapur in Osmanabad and Mukhtainagar in Jalgaon have all demanded prohibition. According to the existing Maharashtra Prohibition Act (amended in 2009), a secret ballot to shut down liquor shops can be called if so demanded by 25 per cent of the women population. In this poll, if half vote against a liquor shop, it can be shut down by the local state administration.

Ashish Deshmukh, a BJP MLA who supports Hazare’s prohibition cause, had written to Fadnavis demanding prohibition throughout the state. Paromita Goswami, an anti-liquor crusader who was instrumental in bringing about prohibition in Chandrapur, feels Hazare’s involvement can turn it into a public movement. “Women are spearheading the movement. They want a dry state. It is not an easy battle,” says Goswami.

The powerful sugarcane lobby in the state supports the liquor lobby since molasses–a byproduct of sugarcane processing–is an important ingredient in liquor production. Some members of the sugarcane lobby in the state also own beer and liquor distilleries. Interestingly, after prohibition became an election issue in Bihar and Tamil Nadu, the liquor lobby in the country is said to have hired the services of a public relations agency. An email sent to the media by the International Spirits & Wine Association of India says that prohibition is an ‘Unviable proposition for any State Government, affects tourism and will in no way curb crime’. The email also contends that the sugarcane industry will be adversely impacted if prohibition is announced, since 95 per cent of all molasses is bought by the alcohol industry.

Hazare, however, is firm on the agitation. It is time, he says, to act in favour of Maharashtra’s women in the face of rising crimes against them. “Alcohol and only alcohol is the main reason for rapes. This will be like a freedom struggle for the women of Maharashtra,” he declares.