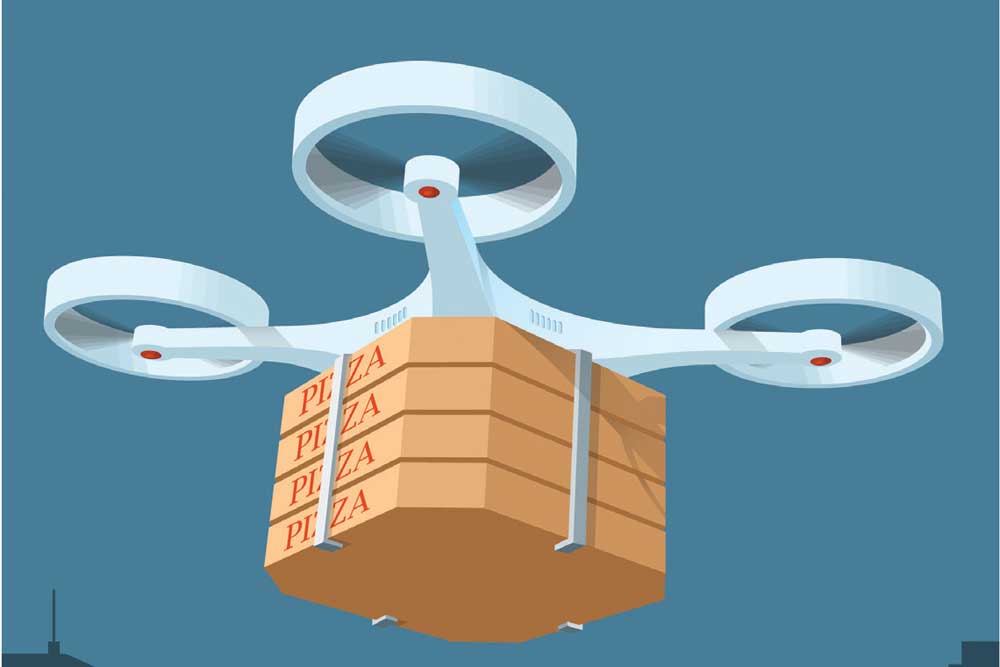 A LITTLE OVER FOUR years ago, a pizzeria in Mumbai uploaded a video showing a drone dropping off a pizza. This was when Amazon had announced its plans of using drones to make future deliveries. And the idea of little flying machines zipping through our skies doing everything from taking pictures to delivering diapers had just begun to take off in the public imagination. The video of the pizza delivery—a distance of 1.5 kilometre done in about 10 minutes—became an internet sensation. And soon enough cops were looking into it, since, although India did not have a specific rule governing drones then, flying anything over an altitude of 400 feet was still forbidden. The whole thing, it turned out, had been staged. A police officer told me then that when they began to investigate they found out that the drone was in fact quite rudimentary. It could hardly fly over 20 feet. It had been shot and edited to make it look like a delivery had been made, when all that was flying 20 feet in the sky was an empty pizza box.

What the video did, however, was get authorities to look more carefully into the civilian application of drones. Within weeks, the Directorate General of Civil Aviation (DGCA) issued a blanket ban on all consumer use of drones.

The Government has now come up with a set of rules around consumer drones, which while it still has several restrictions, permits its use from December. According to these rules, all drones over 250 grams in weight will now need to be registered and acquire a unique identification number. Users of all drones over 2 kg will also need to acquire an operator permit. And permission will need to be taken from a digital platform before every flight, except for smaller drones that fly at a lesser height. Any flying drone has to stay in the operator’s line of sight, which rules out companies like Amazon eventually hoping to command a fleet from an office. One can only fly during the day, and never in congested or sensitive areas like airports, international borders and vital military locations. According to the Government, as the technology evolves, more comprehensive guidelines will be brought out in the future.

These rules were desperately needed. There was a legal ambiguity about whether drone use was allowed or not in India. While, according to the earlier ban, no private body or individual could launch a drone, several drone companies for instance were working for various Government bodies. Many individuals— such as hobbyists or filmmakers or drone companies working on private projects for large companies—were, of course, also doing it on the sly.

Moreover, banning them outright was always going to be counter-intuitive. Drones aren’t just going to fill up our skies in the near future. They are going to transform entire industries. They are going to eliminate jobs, create new ones; change the way goods, and perhaps even people, are transported. Nobody knows how these will occur, or how they are going to integrate into our daily lives. But several interesting projects are already going on—from food, package and medicine delivery to digital mapping and surveillance—which hint at such a future.

Until a few years ago, drones were expensive products that needed expertise to operate. But companies are developing better drones every few months. They are inexpensive and often as simple as toys. And the sight of drones fitted with cameras for aerial photography, which can be purchased for just a few thousand rupees, is now quite common.

In India itself, drones are being used for several projects, from mapping river pollution to monitoring massive crowds like the Kumbh Mela gatherings. Earlier this year, Odisha used drones to map 250,000 households in a slum, supposedly the world’s largest slum-titling project. A few months before that, a man-eating tiger in UP’s Pilibhit Tiger Reserve, which had eluded capture, was caught after using drones to locate its whereabouts.

Nothing at all like the empty pizza box hovering at 20 feet.