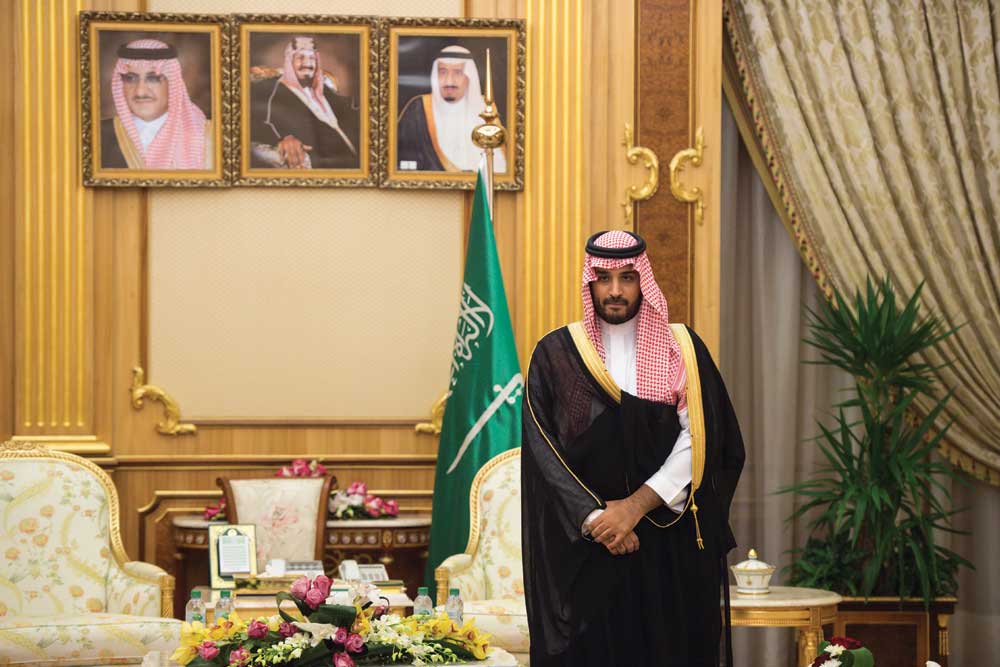 ‘BETWEEN THE IDEA. And the reality. Between the motion. And the act. Between an old father’s love. And a young son’s desire for power’, to misquote TS Eliot, ‘Falls the shadow.’ And there don’t come shadows lengthier than the fractious world of Saudi royalty. King Salman may have always wanted to bequeath Saudi Arabia to his favourite son Mohammed bin Salman (popularly referred to as MBS), but it couldn’t have been easy appointing him heir. There were other royals in this medieval soap opera, dozens and dozens of ambitious half-brothers and other relatives who saw themselves in line under a tradition that has ignored the idea of primogeniture. The most powerful amongst them, an elder nephew, was awaiting his coronation when he found himself divested of his right to accession. Perhaps he should have seen it coming. Ever since King Salman achieved power in January 2015, both he and his son appear to have been working towards this moment. If the monarch’s nephew Mohammed bin Nayef was appointed crown prince, MBS was made his deputy. His authority was soon apparent. ‘This new team swept aside many of the traditional leadership practices,’ Gerald Butt, a Middle East analyst wrote on BBC.com, ‘Moribund state institutions were either scrapped or merged into leaner and more efficient bodies. The whole government decision- making process was streamlined. Indeed, so dramatic was the reshaping of the leadership that many of the reins of power ended up in the hands of the deputy crown prince.’ Oil and defence, which underpin the monarchy’s existence, came under MBS’s charge. When the state TV channel captured the new crown prince placing a gentle kiss on his elder cousin’s hand, a knee bent in faux- reverence, whispering to him that he will always seek his counsel—a moment straight out of a Mario Puzo novel—Bin Nayef was being relieved of all his governmental positions, and the ‘soft coup’ (as Tehran called it) was complete.

The most fascinating thing about MBS is his age. In a country which has always been run by a succession of old men, a 31-year-old is set to ascend the throne. With him, many hope, Saudi Arabia too will change. Some 70 per cent of all Saudis are under 30, they will need jobs, and oil revenues are not enough to sustain state handouts. Economic pressure is compounded by the warfare all around, not to mention tensions across the Gulf with Iran.

In all this, MBS is being projected as the man who can best lead Saudi Arabia. His record so far suggests he wants to veer the kingdom away from hardline interpretations of Islam. He has stripped the religious police of its power to arrest people. He set up an Entertainment Authority that holds segregated concerts, talks about bringing back cinemas, and even reportedly held a comic book convention where men and women danced in the same hall. His Vision 2030, a plan to reform the Saudi economy and society, promises to reduce the country’s dependence on oil, promote entrepreneurship and reduce budget deficits. He is also seen as the force behind the proposed part privatisation of Saudi Aramco, the oil major which funds the country.

Yet, for all his progressive talk at home, he is fast gaining the reputation of a hot-headed youth abroad. He seems overly aggressive vis-à-vis Iran, against which his proxy war in Yemen has attracted severe criticism. The jury is still out on his direction of Saudi entanglement in Syria, with his forces reportedly backing Kurdish fighters and Sunni Arab militia against Bashar al-Assad’s regime. The crown prince’s role in the Qatar blockade has also made observers wonder what his game is. He told the New York Times last month, “We won’t wait for the battle to be in Saudi Arabia. Instead, we’ll work so that the battle is for them in Iran.” In Donald Trump, though, the young man appears to have found an eager friend.