On a Song And a Prayer 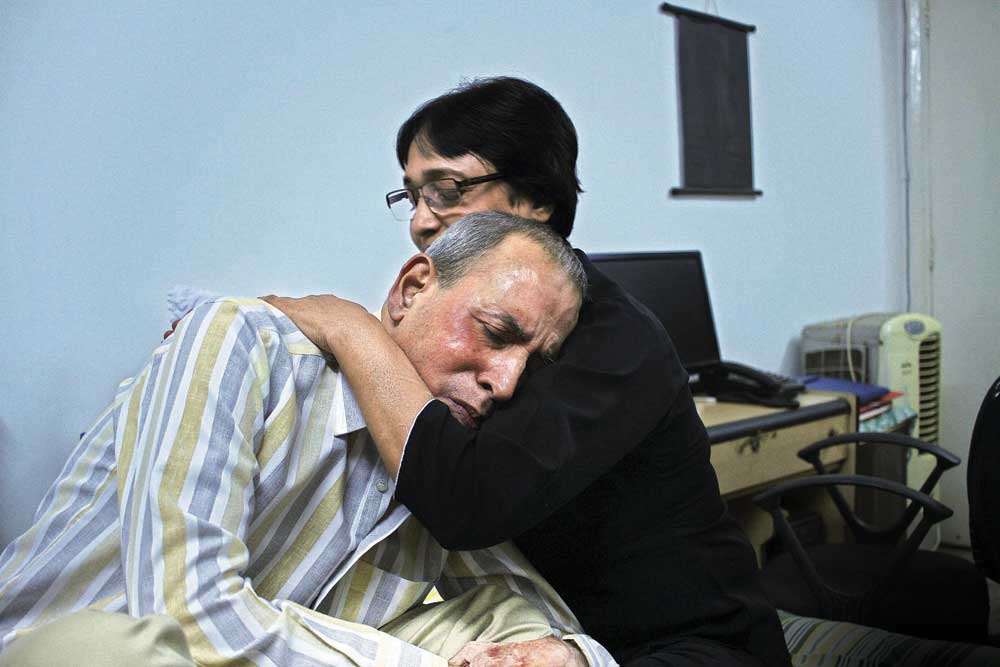 SEVERAL YEARS AGO, when the Shamims first moved to Mumbai, Pushpa would often wonder at her husband Mohan’s chattiness. He would speak non-stop, as Pushpa puts it. He would be at her ear every morning as the couple boarded the same bus from Antop Hill till they disembarked at Worli, where she worked at a bank and he at Doordarshan. He would go on like this endlessly, she says, even though she would get irked and press her palms to her ears and ask him loudly, often in front of everyone in the bus, if he could stay quiet just for a few minutes.

But Mohan Shamim—producer of the popular Doordarshan song show Geet Gata Chal, who counted among his collaborators musicians like Vishal Bhardwaj and Sukhwinder Singh—was a champion rancoteur, filled with life, music and anecdotes. And, however hard his wife pressed her palms to her ears or requested him to sit still and be quiet, Mohan would not.

Until 2003, when a great silence filled the Shamim household. Mohan collapsed while conducting some transactions in a bank. He had had a stroke. When he regained consciousness, among other things, he forever lost the one thing that annoyed Pushpa the most, but which she now realises she misses most dearly—the ability to speak.

After his surgery, Shamim’s condition rapidly deteriorated. The stroke had been caused by a blockage in blood flow to part of the left half of his brain. As a result, the right side of his body was paralysed. He could not speak or communicate, seemed incapable of understanding others, and except for Pushpa, could not recognise anybody. “He became like a baby,” Pushpa recalls. Over the years, with help from doctors , his condition would gradually improve, from moving about in a walking frame for the disabled to using a stick, to his condition now, where he walks with a slight limp. But he remained largely nonverbal, managing to utter only simple small words like ‘yes’, ‘no’, ‘water’ or ‘food’, suffering from a severe language disorder known as aphasia that afflicts people with a brain injury. Neither could he write or communicate.

Given his condition, Pushpa thought it best to leave her husband for a few months with her sister, a nurse, in Chandigarh with the hope that she would be able to help him. And then late on New Year’s Eve, she got a call from her sister. “Just listen to this,” her sister said. And then a familiar voice pressed to her ear again. “Aao huzoor tumko sitaaron mein le chaloon / Dil jhoom jaaye aisi bahaaron mein le chaloon…” Mohan was singing a popular song from the 1968 Bollywood film Kismat.

Over the years, he continued to remain incapable of speech, but he would sing several songs. According to Dr Shirish Hastak, group director of the Neurology and Stroke Services department at Wockhardt Hospital in Mumbai and Mohan’s current doctor, the left hemisphere of the brain is largely responsible for speaking, while the right is used in understanding language as well as processing melodies. In Mohan’s case, the stroke had damaged the left portion of his brain, but the right was intact and healthy. “Mohan may not be able to speak,” Dr Hastak says, “but he sings really beautifully.”

Late last year, when the Shamims first met Dr Hastak, Mohan broke out into a song, as is often the case when he grows fond of someone. This time it was Chalo Bulawa Aaya Hai, Mata Ne Bulaya Hai, from the 1983 Bollywood film Avtaar, which has since become a popular devotional track.

Dr Hastak then made an unusual suggestion. Could he say the same words not through a song, he asked, but in speech. “I had never considered this before—to ask him to speak a song out. I did not even know if it was possible,” Pushpa recalls thinking. And for the first time in over 15 years, recalling the words of a song he knew by heart, Mohan managed to put an entire sentence of several complex words into speech. “It was just beautiful, just beautiful,” Pushpa remembers of that moment.

Dr Hastak has now begun to put Mohan through what is known as melodic intonation therapy. Here patients are made to communicate, using familiar tunes and melodies, in sing-song sentences. Therapists work towards removing the melody gradually to enable patients to articulate themselves with regular speech. This form of therapy was developed in the 1970s and has now come to be accepted as a way to help stroke patients suffering from aphasia. However, it hasn’t caught on at all in India. Dr Hastak has used this therapy with two other patients so far, and only one of them made progress. Families of stroke patients, overcome with dealing with the other issues of a stroke, he says, often pay little attention to verbal problems. “And those going through some form of speech therapy are simply not comfortable with—and [even] embarrassed by—the idea of singing to communicate,” he says.

Mohan, however, has no such inhibitions. A career in TV music programming and an unembarrassed lifetime of peppering his wife with songs and anecdotes helps him break into a song every now and then.