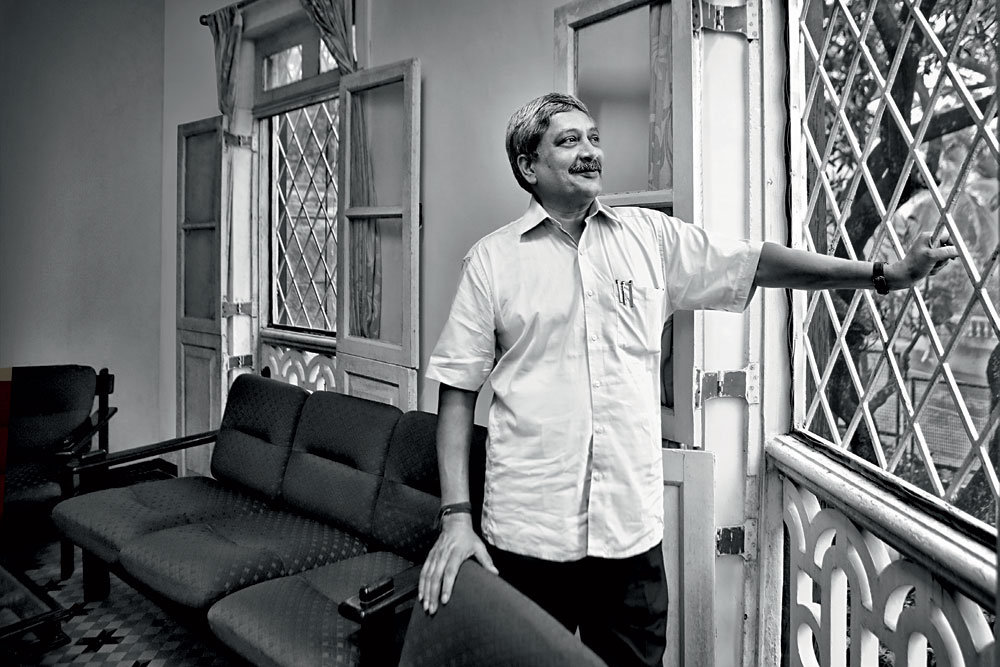 IT IS OFTEN forgotten just how small Goa is. Its entire population, estimated at around 1.8 million , would fit into about three large suburbs of Mumbai. Areawise, Goa is about one-tenth of Kerala, which itself is one of India’s tinier states. Goa has only two members of Parliament. In the Legislative Assembly, there are only 40 members with everyone fancying a shot at the chief minister’s chair sooner or later because just a seat or two can make a difference on which party comes to power. It is a drama that has repeatedly played out ever since Goa became a state and the current shuffling of permutations and combinations after the death of Manohar Parrikar should come as no surprise. When Parrikar first became chief minister, he too played the game. But in the decade-and-a-half since, despite the state’s long history of revolving chief ministers, he alone became its alpha statesman. In recent times, if Goa hasn’t come across as irrelevant in the national political landscape, it is only because of Parrikar’s understated but outsized personality.

Consider that when he first led the BJP to power in the state, the obstacles therein. Goa has a minority population—25 per cent Christians—that is far greater than the national average. Minorities don’t generally vote for the party and so the BJP had to optimise its 66 per cent Hindu voters to its maximum. Kerala too, with its large proportion of minorities, is subject to a similar phenomenon and over there the BJP is far away from cracking it. In Goa, it was largely Parrikar who made BJP its largest political force. He did this in the old-fashioned way; through long decades of grinding away at every level. As this tweet that BJP leader Subramanian Swamy made on Parrikar’s passing away showed, ‘…I first knew him when he was an IIT Powai student who served as my booth agent when I won twice in that constituency in 1977 and 1980. He remained my friend through thick and thin.’

Like numerous top-rung BJP leaders, Parrikar’s roots were in the Rashtriya Swayamsevak Sangh, a relationship that began in his childhood. A Times of India profile on him says that even when he joined IIT Bombay in 1973, he started an RSS unit there. In the pre-liberalisation era, IIT graduates came out with a halo that would follow them for the rest of their lives. It gave them a fast ticket to elite India, and should they so choose, an easy exit out of the country. Parrikar didn’t choose either of the two options. Instead, he returned to his hometown of Mapusa and ventured into what would be a mixture of business and politics. He became the head of the RSS in the town and then the gradual foray into formal politics followed, building his party from scratch. Even if he didn’t follow the typical IITian route, there is little doubt that the stamp of the institute contributed to his political brand. India had never seen an IIT graduate as chief minister until him. It brought him into the national consciousness almost as soon as he was sworn in.

Despite Goa’s long history of revolving chief ministers, Parrikar alone became its alpha statesman. If the state hasn’t come across as irrelevant in the national political landscape, it is only because of his understated but outsized personality

Goa became a state in 1987. It would take the party 13 years to come to power and a lot of that was Parrikar’s doing. As the news agency IANS’ obituary on him noted, ‘Working in tandem with Rashtriya Swayamsevak Sangh veteran Subhash Velingkar, Parrikar was the cornerstone of BJP’s rise in Goa, from a party whose candidates routinely lost poll deposit fees in the late 1980s through early 1990s, to a powerful outfit which won a simple majority in 2012. But somewhere along the meteoric rise, says his mentor-turned-foe Velingkar, the BJP became Parrikar and Parrikar became BJP in Goa… Sanjeev Verenkar, who authored a character sketch of Parrikar in his book Hada Masachi Devla (Temples of Flesh and Bone) credits his stunning rise to several unique qualities. “His memory was as astounding as his vision. He was sharp, incisive at analysing situations, could take quick decisions and I have never seen him tire… He had one fatal flaw. It was his disregard for another person’s opinion. He underestimated others,” says Verenkar.’

In 2000, after the reigning Goan People’s Congress Party saw four of its ministers split and form a new party; Parrikar, with 18 BJP MLAs, cobbled together a majority. One-thirds of those sworn in, had been ministers earlier; Parrikar was not of that lot. His path was directly to the chief minister’s chair. In 2005, it was his turn to have the rug pulled out from under his feet with MLAs switching. It would take seven years to get back in power.

Parrikar’s initial tenure as chief minister wasn’t uneventful, marked by accusations that have followed BJP governments— sidelining of minorities and rewriting of textbooks to foster an RSS view of the past and present. However, even his critics have never faulted him on integrity. And a down-to-earth image, perhaps carefully cultivated, became the stuff of unending anecdotes—people finding him standing in queues at airports wearing slippers or seated next to them in economy class.

When the BJP Government came to power in the Centre in 2014, Parrikar was pulled out of Goa to become Defence Minister, a ministry that is a crown of thorns because of corruption allegations that inevitably follow every defence deal. It was his reputation of incorruptibility that made him an easy choice. But unlike AK Antony, his predecessor from the Congress, who also had a reputation for honesty and maintained that by not taking decisions, Parrikar brought in his usual straight-to-the-point working style. As a tweet by Lt General Satish Dua remembered, ‘As I flew to Srinagar a day after demise of @manoharparrikar couldn’t help recalling how he landed here just hrs after suicide attack at Uri & how sitting in my office he gave go ahead for a bold riposte. We launched #SurgicalStrikes in 10 days. Truly BOLD leader!’

Parrikar returned to Goa as chief minister when a crisis in the state threatened to wrench it out of the BJP’s grasp. When cancer struck him, he was in his early 60s, an age when politicians typically peak in India. Pancreatic cancer is swift, painful and usually terminal. Parrikar refused to wait for death, continuing work through the deterioration of his body. Images of him in office with tubes sticking out of his nose interspersed with absences for treatment.

Parrikar’s passing does not bode well for both the BJP and Goa. His party especially will flounder, given that his stature stabilised it and also made it easy to get the other MLAs necessary to be in power. Even a few days before his death had been announced, there was news that the Congress, in anticipation, was planning to stake claim. It took urgent firefighting by BJP leaders like Amit Shah and Nitin Gadkari to ensure a smooth succession. The new chief minister, Pramod Sawant, has had to give deputy chief ministerships to two small political outfits. The government’s majority is razor-thin and another crisis is a flip or two away. After Parrikar moved to Delhi as Defence Minister, Laxmikant Parsekar who became chief minster in his stead, couldn’t even retain his seat in the next election and the BJP was not the largest party. It took Parrikar’s personal presence to outflank the Congress, the largest by numbers, and more importantly sustain the majority. Without a majority on its own, it will be a challenge for the BJP to retain power without a leader like Parrikar. In Goa, those are shoes so big that they look unlikely to be filled anytime soon.