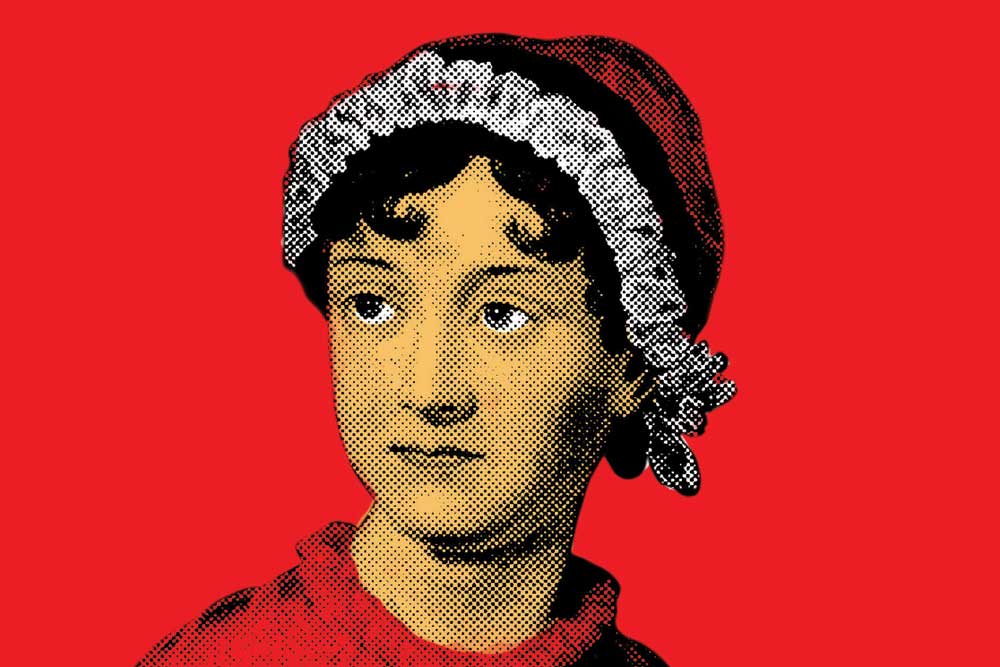 WHEN JANE AUSTEN’S first novel Sense and Sensibility was published in 1811, the title page simply read, ‘A Novel. In Three Volumes. By a Lady’. What could be greater justice than the fact that on her 200th death anniversary, that same anonymous lady gets her very own bank note? Austen is only the third writer to grace an English note (following William Shakespeare and Charles Dickens) and the first woman writer to do so. And really, no one can grudge her the honour. (One can hope that Virginia Woolf might similarly be commemorated in the future.)

When Austen died at 41, on June 18th, 1817, her profession as a writer did not make it to her epitaph. Her brother Henry chose instead to focus on her ‘charity, devotion, faith and purity’. While she never got to embrace the title of an author when she was alive, death has ensured her legacy. Her books have been translated into 40 languages and Pride and Prejudice itself has sold over 20 million copies. If her epitaph were to be written today, we could, perhaps, borrow from Virginia Woolf who wrote in The TLS of 1913, ‘More than any other novelist she fills every inch of her canvas with observation, fashions every sentence into meaning, stuffs up every chink and cranny of the fabric until each novel is a little living world, from which you cannot break off a scene or even a sentence without bleeding it of some of its life. Her characters are so rounded and substantial that they have the power to move out of the scenes in which she placed them into other moods and circumstances.’

The greatness of Austen is not only that she created the prototype of the modern novel, but that she continues to be relevant. Her novels have been endlessly adapted and modified because they still make sense today, because they can decode current sensibilities. Her characters can easily move out of London or Pemberley or Mansfield Park and be placed in Delhi or Shanghai or Beijing. Indianise the names, and we can all conjure our own comedy of manners. Mrs Bennet, the mimsy busybody, could easily be Mrs Batra, your Punjabi neighbour with an axe to grind and daughters to wed. Emma Woodhouse, the self-absorbed, privileged damsel could be Aisha of south Bombay, whose artifice overwhelms her potential. Mr Darcy could be your Mr Dasgupta, the dignified Bengali bachelor whose reticence will be misunderstood as snobbery.

A fascinating study of Austen’s novels in facts, figures and charts published in The Guardian brings to light the world she knew and the only world she wrote about. All her characters (in her six novels) are independently wealthy who have no professions. Balls and picnics feature in all of her books. Evenings and afternoons are spent playing cards. And if romance is the fulcrum of her novels, then elopement is also a prerequisite. The servants speak no lines. The only historic event of the time that gets a mention is the Napoleonic War (1803-1815). The Industrial Revolution and French Revolution get no airtime at all. The lovers will marry by the end.

Even if the nuts and bolts of her six novels are simple enough, the triumph of Austen is her singular wit. It is a cleverness born from immediate observation but one which is universal in nature. She says it well in Northanger Abbey: ‘The person, be it gentleman or lady, who has not pleasure in a good novel, must be intolerably stupid.’

Two hundred years after her death, you have to be a dud to not enjoy her novels.