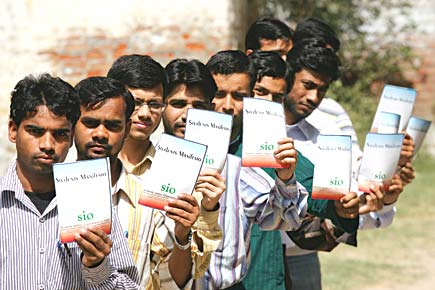 The Student Islamic Organisation wants student politics and elections to be allowed on all campuses.


Give us politics on every campus and we will vote for you. That’s what the Student Islamic Organisation (SIO), the students wing of the Jamaat-e-Islami Hind, has promised in its 35-point ‘manifesto’ released earlier this month. The SIO wants student politics and elections to be allowed on all campuses.
Members of the SIO will meet parties, including the BJP, to press for 6 per cent GDP allocation for education, the axeing of textbooks that spread communal hatred, a check on commercialisation of education, and quotas for religious minorities as per the Ranganatha Mishra Commission.
“This is not a political party manifesto. This is a strong reminder from the student community that we will support those candidates who agree to support our demands. It is vital that the student community be aware of and engage with what is happening in the education sector and the society we are living in,” says Suhail KK, president of SIO. He adds that they would vote for parties that can prevent the NDA from coming to power, because “we need a secular alliance for the country”.
The manifesto also seeks investigation into recent blasts and special laws to prevent violations of human rights.