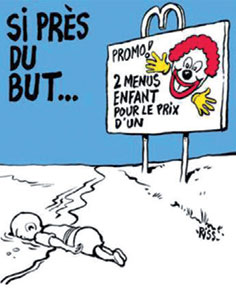 Not so long ago, ‘Je Suis Charlie’ trended worldwide. Leaders and people of several nations walked in solidarity with the cause of the editorial team of French satirical magazine Charlie Hebdo, many of whom were killed by gunmen for cartoons made of Prophet Muhammad. However, perhaps there is a line, which even the most offensive cartoonists ought to draw. The magazine, in its latest edition, has mocked the Syrian refugee crisis with a cartoon of the drowned Syrian toddler Aylan Kurdi. The cover says, ‘Welcome to the migrants, so close to the goal… Promotional offer: kids menu 2 for the price of 1.’ If this isn’t shocking enough, there’s a second cartoon that depicts what appears to be Jesus next to the drowned boy with the caption: ‘Proof that Europe is Christian. Christians walk on water—Muslim children sink.’

Predictably, these cartoons have met with widespread criticism, many of the voices being the same that once upheld the magazine’s work. Aylan Kurdi’s body on a beach was a haunting image of the tragedy that Syrians are facing. And for the satirical magazine to mock this humanitarian crisis is not only heartless, but also satire gone terribly wrong. Surely, few would want to be Charlie Hebdo this time.