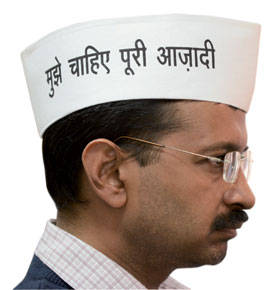 It’s not a secret that inducements are given to voters during elections and that is why it is illegal. And, it is true that Aam Aadmi Party leader Arvind Kejriwal is not offering anything but only recommending that voters take the inducement from whichever party gives it but cast their votes only for AAP.

“What is bribery? It is taking money and then voting. However, I am forbidding voters to do so. I say, ‘Take money from them but don’t vote for them. Rather give vote to us’,” Kejriwal said at a rally. Still, the statement is too clever by half. For one, it tells voters that it is okay to take a bribe so long as they don’t do the bidding. By the extension of this logic, government servants should be allowed to take money under the table so long as they don’t do the work.

Indeed, if he becomes Chief Minister then Kejriwal should also follow the same dictum and guiltlessly take bribes without providing the service. But, for a reputation built around an anti- corruption campaign, he will obviously be miles away from any such ploy. The Election Commission has rightly warned Kejriwal to stop making such speeches. Telling voters to take inducements drags them down to the level of those who offer it.