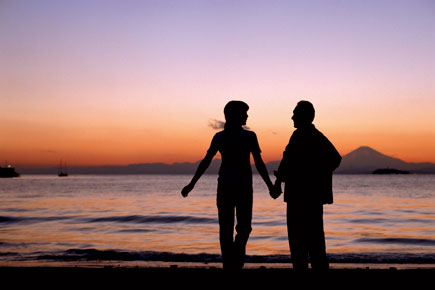 According to one theory, referred to as the ‘grandmother hypothesis’, grandmothers have played an important role in human evolutionary history. This theory claims that grandmothers cared for their grandchildren after the end of their own childbearing years, thereby freeing up young mothers to keep up reproduction. This became such an integral part of child-rearing that evolution favoured the grandma who lived long after menopause. Her longevity genes would pass on to more descendants.

A new study, based on computer simulations, now finds that the evolutionary importance of grandmas could also explain why older men are often attracted to younger women. The study was led by anthropologist Kristen Hawkes of the University of Utah and published in the journal Proceedings of the National Academy of Sciences.

Hawkes claims that grandmothering and longevity also led to a surplus of older fertile men who could only have children by mating with younger fertile women. As human longevity increased, Hawkes explains in a press statement, there were ‘lots more old guys, so you have an increasing number of males in the paternity competition, and the only way you can become a father is with a fertile female, which means a younger female. So males who had a preference for younger females were more likely to leave descendants.’ ‘It looks like grandmothering was crucial to the development of pair bonds in humans,’ adds Hawkes. ‘Pair bonds are universal in human societies and distinguish us from our closest living relatives… Our hypothesis is that human pair bonds evolved with increasing payoffs for mate guarding, which resulted from the evolution of our grandmothering life history.’

This theory contradicts the view that male hunters provided food to females and their offspring in exchange for the paternity of those kids so that males have descendants and pass on genes. As Hawkes explains, ‘The key to why moms can have next babies sooner is not because of dad bringing home the bacon, but because of grandma helping feed the weaned children. That favoured increased longevity, as longer-lived grandmothers helped more.’