The Sound of Laughter

New research traces how laughter would have first sounded among primates 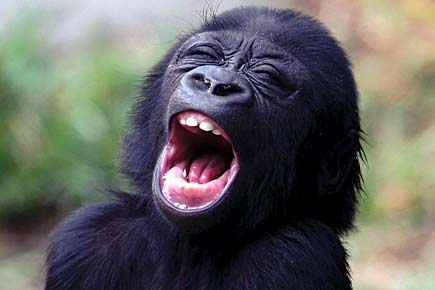 New research traces how laughter would have first sounded among primates


Music and laughter rank high on the list of abilities or actions that make us human. However, birds can carry a tune and now it seems apes can laugh. Marina Davila Ross of the University of Portsmouth has used recordings of great apes and human babies being tickled to chart out the evolution of laugh sounds. Laughter, their paper published in Current Biology asserts, can be traced back over 10 million years.

Ross recorded human laughter from babies of friends invited over for a tickle session. For ape sounds, she recorded tickle noises in European zoos and a Malaysian primate rehab centre.

Early laughter, her work suggests, would have sounded much as the orangutans do today, with their long slow grunts. The change in laughter involved shorter and faster sounds much as chimpanzees emit today. Breathing patterns also evolved: orangutans emit sounds akin to laughter while inhaling and exhaling but humans laugh mostly while breathing out.

The connection between tickling and laughter draws on earlier work suggesting laughter is a form of social bonding. “Primal laughter evolved as a signalling device to highlight readiness for friendly interaction,” says neuroscientist Jaak Panksepp. Neurobiolgist Robert Provine and three of his graduate students eavesdropped on 1,200 conversations to confirm this. Laughter they found was 30 times more frequent in social than solitary situations. Intriguingly, the sound of laughter doesn’t just differ among species, humans show significant gender differences in how they laugh. Jo-Anne Bachorowski at Vanderbilt University recorded the laughter of 97 volunteers who watched clips from funny movies. The finding showed 50 per cent of women laughed in sing-song (voiced) manner, 25 per cent in grunts (exhaling through mouth) and 25 per cent in snorts (exhaling through nose). In each category of laughter, it was 33 per cent for men. If we compare this with the recent research on the evolution of the sound of laughter, we can draw our own conclusions about where men and women stand with respect to apes.