The Mind of a City

Research shows that cities are organised like mammal brains, since both systems respond to the problem of efficient transport 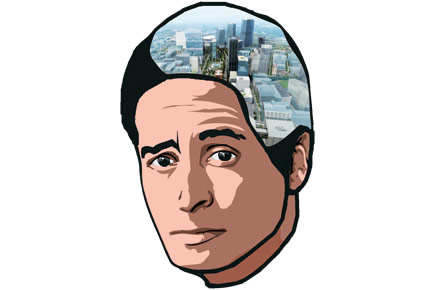 Cities are organised like mammal brains, since both systems respond to the problem of efficient transport


As cities grow, more and more highways and streets need to be added. But it turns out that if the city doubles in size, the number of highways does not double, but rather increases by a factor of 1.68. To be precise, the growth of new highways is proportional to the surface area of the city raised to the power of 3/4. It turns out this is true not just for cities; animal brains follow the same pattern. Of course, in the brain, connectivity does not occur through highways but through pyramidal neurons that follow the same law. Their number in the brain is proportional to the surface area raised to the power of 3/4.

These results are only one part of a paper published by researchers at Rensselaer Polytechnic Institute in the journal Complexity. As the table taken from their paper shows, the parallels between a brain and a city are rather remarkable. “When scaling up in size and function, both cities and brains seem to follow similar empirical laws,” says Mark Changizi, a neurobiology expert who led the study.

“They have to efficiently maintain a fixed level of connectedness, independent of the physical size of the brain or city, in order to work properly. Natural selection has passively guided the evolution of mammalian brains throughout time, just as politicians and entrepreneurs have indirectly shaped the organisation of cities large and small,” adds Changizi, “It seems both of these invisible hands have arrived at a similar conclusion.”