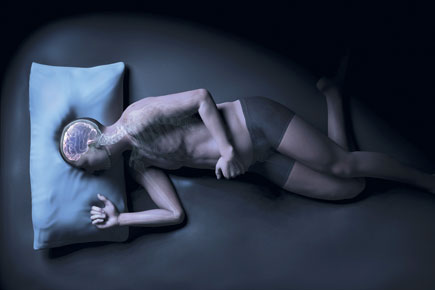 
Sleep-learning experiments are known to be difficult to conduct. While previous trials of verbal sleep learning have failed to show any new knowledge being gained, more and more research has demonstrated the importance of sleep for learning and memory consolidation. However, no study has so far managed to show how exactly new information is taken in by an adult brain during sleep.

A new study, published in Nature Neuroscience, finds that if certain odours are presented after audio tones during sleep, people start sniffing when they hear the tones alone—even if there’s no odour—both during sleep and, later, while awake. This finding indicates that people can absorb new information while asleep, and this can unconsciously modify their waking behaviour.

For the experiment, Israeli researchers employed a type of conditioning by exposing subjects to a tone followed by an odour, so that they exhibited a similar response to the tone as they did to the odour. In the experiments, the subjects slept in a special lab while their sleep state was continuously monitored. As they slept, a tone was played, followed by an odour—either pleasant or unpleasant. Then another tone was played, followed by an odour at the opposite end of the pleasantness scale. During the night, the associations were partially reinforced, so that the subject was exposed to just the tones as well. The sleeping volunteers reacted to the tones alone as if the associated odours were still present—by either sniffing deeply or taking shallow breaths.

The next day, when participants were awake, the tones were played alone, without accompanying odours. But although they had no conscious recollection of listening to the tones at night, when exposed to tones that had been paired with pleasant odours, they sniffed deeply, while the second set of tones that were associated with bad smells, provoked short, shallow sniffs.

‘The common knowledge is that although the sleeping brain can process, consolidate and strengthen information, it cannot learn new information. We showed that it could… There will be clear limits on what we can learn in sleep, but I speculate that they will be beyond what we have demonstrated,’ the researchers wrote in the journal.