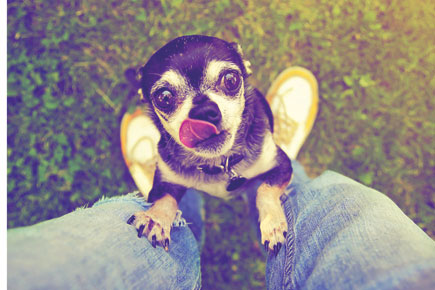 What causes jealousy? Is it simply a human social construct, not necessarily seen among all human races and cultures, and mostly tied to sexual or romantic relationships? Or could it be a more primordial emotion, like anger and fear that serve an evolutionary purpose? Over the years, researchers have been divided on this issue, with many believing that jealousy is not hardwired into human beings the way anger and fear is. However, a new research study, on dogs, claims to prove that jealousy evolved over time to protect social bonds.

This study, conducted by US researchers from UC San Diego, was published in PLOS ONE. For this study, the researchers had the owners of 36 dogs ignore them in favour of items like a stuffed dog, a jack-o- lantern pail or a book. The researchers found the canines pushing their owners and rivals, indicative of jealous behaviour, when they were ignored. This was most pronounced when the object was a stuffed dog, with as many as 78 per cent of all dogs behaving in this manner. It remained quite prominent even when the owner showed a preference for a pail, as much as 42 per cent. It was least, 22 per cent, when the rival object was a book. About 30 per cent of the dogs also tried to get between their owner and the stuffed animal, with 25 per cent snapping their jaws at the stuffed dog. Only one dog tried to snap its jaws around the book and the pail, each.

The researchers write in the journal, ‘It is commonly assumed that jealousy is unique to humans, partially because of the complex cognitions often involved in this emotion. However, from a functional perspective, one might expect that an emotion that evolved to protect social bonds from interlopers might exist in other social species… We found that dogs exhibited significantly more jealous behaviors… when their owners displayed affectionate behaviors towards what appeared to be another dog as compared to nonsocial objects. These results lend support to the hypothesis that jealousy has some “primordial” form that exists in human infants and in at least one other social species besides humans.’