Gulp! They were Big

Elephants need to eat for 18 hours a day. Large dinosaurs would need to have eaten for 30 hours a day. How then did they manage to get so big? 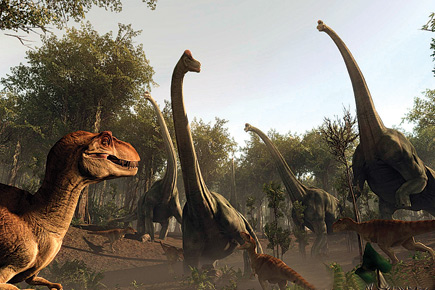 Large dinosaurs would need to have eaten for 30 hours a day. How then did they manage to get so big?


The fascination with dinosaurs may have something to do with the movies, but even without having to worry about doomsday scenarios and T Rexs on the loose, the largest creatures ever to walk on earth continue to fascinate scientists with the puzzle of their very existence. The largest creatures on land today, elephants need to eat 18 hours a day to maintain their size. “This led us to one of the many riddles that gigantism of dinosaurs puts before us,” says Professor Martin Sander from the University of Bonn, who is spokesperson for an international research group studying details of dinosaur biology, “They were just so large that a day would have had to have 30 hours so that they were able to meet their energy demands.”

In a paper in Biological Reviews, the scientists have come up with a simple answer for how dinosaurs managed to circumvent this paradox: they simply didn’t chew their food, they gulped it down. This also explains why mammals have just never been able to grow so large—all mammals chew their food.

This difference in eating habits goes a long way in explaining the differences in body structure between large mammals and dinosaurs. Chewing food has its advantages; the food that reaches the stomach is easier to digest and releases energy faster than food that is gulped down. But the molar teeth required for chewing have to be housed somewhere, which is why the heads of large mammals are larger in proportion to their body than is the case for dinosaurs. Dinosaurs could get away with relatively small heads that served to pluck food off and route it to the stomach.

The stomach would, of course, have to be much larger in comparison to a mammal of similar size because the unchewed food would take much longer to digest; hence the typical dinosaur body, a small head and a large body. This provided less energy, but dinosaurs compensated with a far more efficient metabolic system.