What our grannies might have done to make us brainier and, therefore, live longer 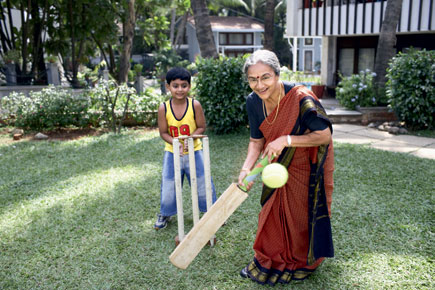 What our grannies might have done to make us brainier and, therefore, live longer


What our grannies might have done to make us brainier and, therefore, live longer

Why do humans lead longer lives than other primates? According to a new study, published in Proceedings of the Royal Society, this is because grandmothers influenced human longevity over the course of several generations.

Female chimpanzees rarely live beyond their 30s or early 40s, when their fertility typically ends. But according to the study, a computer simulation shows that the influence of grandmothers can extend their lifespan to human levels within 24,000 to 60,000 years of evolution.

The study backs up what is known as the ‘Grandmother Hypothesis’, as opposed to the ‘Hunting Hypothesis’. According to the Grandmother Hypothesis, older women gained an evolutionary edge by caring for their grandchildren after their own childbearing years were over. This resulted in women having longer lifespans. The Hunting Hypothesis argues that as resources dried up for human ancestors in Africa around two million years ago, hunting became more advantageous than foraging for food. That led to natural selection in favour of bigger brains, which were capable of learning better hunting methods with better weapons. This increased brain size in our ape-like ancestors was the major factor in humans developing lifespans longer than apes’.

According to the researchers, when children were no longer able to forage for themselves because African forests became drier, older women started taking care of children. They would help dig up tubers, and help children crack hard nuts. This allowed their daughters to keep producing babies. Healthy grandmothers who lived long lives then passed on their genes to more descendants. The Grandmother Hypothesis initially stemmed from observations of Tanzania’s Hazda hunter-gatherers in the 1980s. In that community, older women spent their days collecting tubers and other food for their grandchildren.