A study throws light on the evolution of drinking alcohol 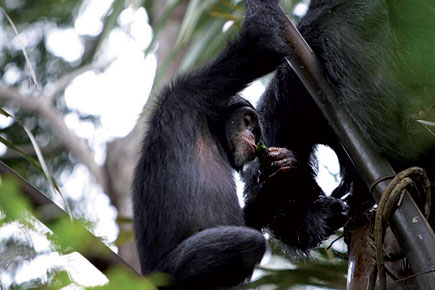 If you like your drink and are finding it hard to kick the habit, then blame it on evolution. And not just human evolution. A recent study has shown how even chimpanzees living in the wild have a taste for it.

A report of the American Association for the Advancement of Science’s journal Science says, ‘A team led by Kimberley Hockings, a primatologist at the Center for Research in Anthropology in Lisbon, concludes from a 17-year study of chimps in West Africa that primates can tolerate significant levels of ethanol and may actually crave it, as humans do.’

From 1995 to 2012, the team had observed 26 of these animals in Bussou, Guinea. In the same region, villagers used to tap palm wine by collecting sap in buckets from trees. The team noticed chimps coming to the buckets when no one was around, making cups out of leaves and then drinking the wine. The team’s findings were published in the Royal Society Open Science journal and the Science article noted, ‘…over 17 years it observed 20 ‘drinking sessions’ involving 13 of the chimps, who lapped up the sap at an average rate of about nine leaf dips per minute….The 13 chimps included males, females, and young chimps. The other 13 animals were never observed drinking during the entire period.’

It was always known that African apes could metabolise ethanol, the main component of booze. There is a theory called ‘drunken monkey hypothesis’ that states, according to the scientists’ paper, ‘that natural selection favoured those primates with an attraction to ethanol (commonly referred to as alcohol) because it was associated with proximate benefits (e.g. acting as an appetite stimulant or a cue to finding fruit, or as an unavoidable consequence of a frugivorous diet, etc), consequently increasing caloric gains.’

Voluntary alcohol consumption, however, is not so well known. But it is a little too soon to say that chimps could be raging alcoholics if only they had got enough supply. The scientists could not say for sure whether the chimps got high after drinking the wine. One male was noticed moving restlessly, but that could have meant anything. Also, their attraction to the wine need not be a sign of their need to get drunk but of their craving for the fluid’s nutrition.