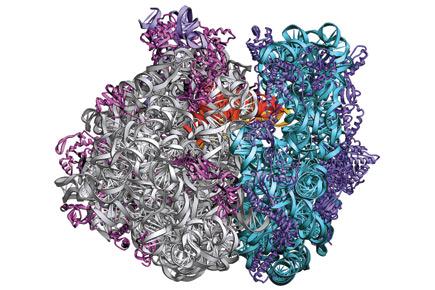 
The Nobel Prize in Chemistry awarded to Ada Yonath, Thomas Steitz and Venkatraman Ramakrishnan is as much a homage to 150 years of the theory of evolution as it is to the three scientists at the heart of this work. Perhaps it is best to let the Nobel Prize committee’s own words speak for the award this year.

`The 2009 Nobel Prize in Chemistry is the third in a series of prizes that show how Darwin’s theories actually function at the level of the atom. Images, generated by means of various X-ray techniques, show how the simple DNA code can manifest itself not only as hearing, feeling and taste, or muscles, bone and skin, but also as thoughts and speech. The trilogy of prizes began with one of the most famous Nobel Prizes of all, that of 1962, when James Watson, Francis Crick and Maurice Wilkins were recognised for their elaboration of an atomic model of the double-stranded DNA molecule. The second prize in the trilogy was awarded in 2006 to Roger D Kornberg for X-ray structures that explicate how information is copied to the messenger RNA molecule.’

The prize this year describes the structure of the ribosome that takes the information from the mRNA and produces proteins ranging from haemoglobin to insulin that control the functioning of a biological organism.

In 1980, Ada Yonath managed to generate the first 3D crystals of the ribosome’s large subunit. Eventually more scientists joined the race. Among them were Thomas Steitz and Venkatraman Ramakrishnan. With their effort, the ribosome was finally mapped out in 2000. Besides the mapping, Ramakrishnan’s work also shows how the ribosome manages its task with such fidelity—in putting together amino acids to form proteins, it makes a mistake about once per 100,000 amino acids.