A diet rich in capsaicin, the active ingredient in red chillies, burns fat more rapidly than an equivalent diet that lacks capsaicin. 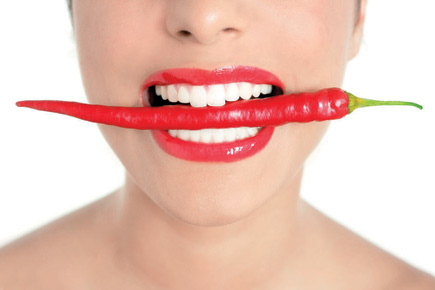 
The prevalence of red chillies in tropical diets seems to extend around the world. All sorts of theories have been advanced for its presence in food, but the simplest explanation may be the most plausible. Scientists in Spain have found that the ‘addition of ground peppers (both sweet and hot) to beef burgers delayed and significantly inhibited the oxidation of both myoglobin and lipids as well as the growth of psychotropic bacteria’.

In simple terms, spices are a preservative, as we know well in India, and the reason they must have first been added to food would have been to improve shelf-life in a hot climate where food deteriorates so rapidly. But what may have started off as a preservative has stayed on as a flavour that literally adds spice to tropical foods. And now scientists are finding that the benefits of these spices extend beyond preserving food.

Researchers at the University of California ‘recruited 34 men and women and randomised the subjects to take either placebo pills or supplements containing the non-burning dihydrocapsiate (DCT) pepper analog’. Since they were working with people not used to eating spices, they used a non-spicy version of capsaicin, the active ingredient in red chillies.

According to a Federation of American Societies for Experimental Biology press release, ‘Two dosage levels of DCT were tested. At the beginning and end of the study, body weight and body fat were assessed, and the researchers determined energy expenditure (heat production) in each subject after he or she consumed one serving of the test meal… Their data provided convincing evidence that, at least for several hours after the test meal was consumed, energy expenditure was significantly increased in the group consuming the highest amount of DCT… They were also able to show that DCT significantly increased fat oxidation, pushing the body to use more fat as fuel. This may help people lose weight when they consume a low-calorie diet by increasing metabolism.’ Spices then actually heat up the body to burn fat. In another study, strawberry juice also qualified as a candidate, but chillies were just more effective.