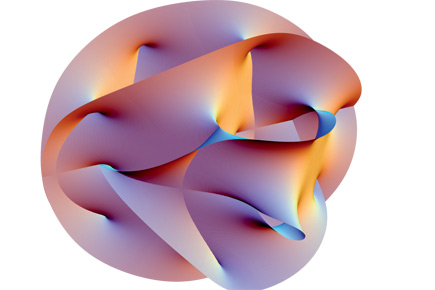 
String theory has recently been receiving a great deal of negative attention. The criticism runs that the theories, since they are in fact several different and often contradictory theories, are just fanciful mathematical constructs that can be fine-tuned to give almost any desired result without being amenable to actual experimental testing. Matters though are never that simple in science, and often enough in the past the elegance and simplicity of mathematics has presaged physically verifiable results.

A recent computer simulation by Japanese physicists, though by no means settling the question one way or another, at least suggests one of the claims of string theorists is realisable. The work, to be published in Physical Review Letters, uses the mathematics of a certain kind of string theory to start with a model universe that has nine space dimensions. Starting with the Big Bang, the model results in the expansion of three dimensions while six remain confined to a minuscule and currently undetectable size. This is one of the key requirements for a string theory universe.

While string theory in its original form is difficult to calculate with, the physicists used a version where the strings are realisable as rectangular arrays of numbers called matrices. This allows complicated calculations which can be used to simulate high energy events such as the Big Bang.

“What we do in this simulation is generate hundreds or thousands of matrices, each of which describes the whole history of the universe during some finite time interval. We then have to take an average over the matrices to get the physical information as to how the universe evolves in time,” one of the authors of the paper, Jun Nishimura, explained.

“Space-time has certain uncertainties … as dictated by Heisenberg’s uncertainty relation. One of our important findings is that this quantum nature of space-time indeed favours three extended spatial directions rather than other cases. How the quantum space-time evolves into a classical one as we perceive now, is an important issue we are planning to address in the near future,” he added.