With Amit Shah at Home, a policy shift is inevitable 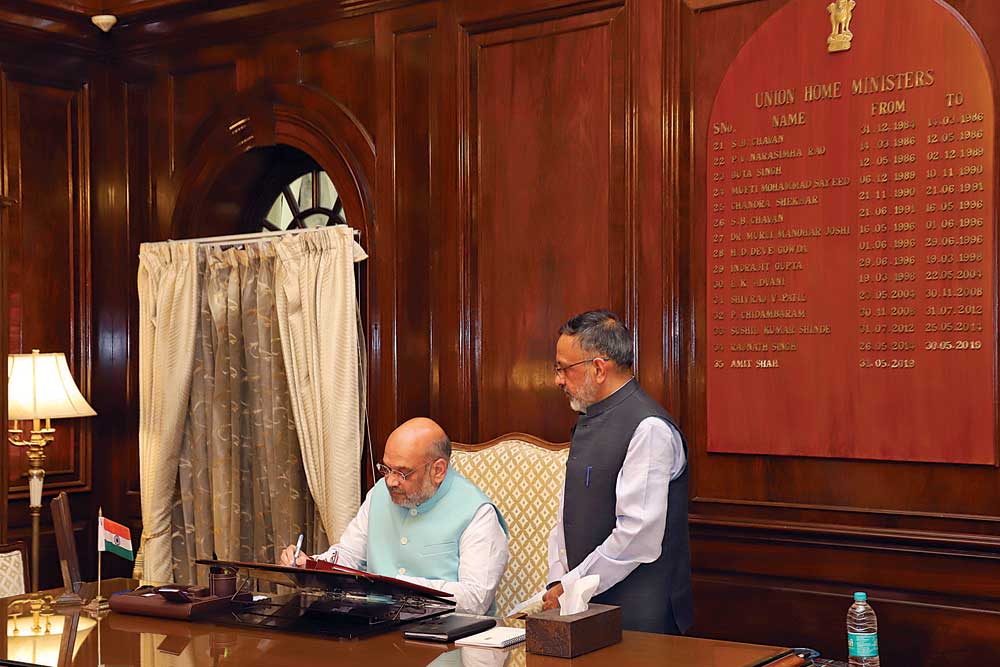 IT IS TWO YEARS AGO around the time of Eid that the Jammu and Kashmir Police officer Ayoub Pandith was lynched by a mob outside Srinagar’s Jama Masjid. On Eid this year, a group of masked men appeared outside the mosque, flaunting flags of the Islamic State. But this time the situation is different than two years ago. Pandith’s killing took place as Kashmir had slipped into a situation seen by many as the worst since the early 90s. Now, in the last few months, the situation has been brought under significant control once again. The recruitment of local youth, which had increased manifold in 2017, has witnessed a sharp decline so far this year.

As Amit Shah takes over as the Union Home Minister, many are expecting that New Delhi’s Kashmir policy will undergo a sea change. Shah has hit the ground running. He has had several meetings with Kashmir players, including one with the state governor and the head of the Intelligence Bureau. There have been indications that the new Government may push for delimitation of the state, an exercise which will ensure more Assembly seats for the Jammu region. Sources reveal that the Kashmir Desk of the Home Ministry may be overhauled soon. The Election Commission has also issued a statement that the Assembly polls in the state are likely to happen later this year.

Therein lies a challenge for Shah. In 2015, the BJP committed the mistake of allying with the Peoples Democratic Party (PDP) to form a government in the state. It proved to be a disaster. While the alliance was broken later, the damage had already been done. This time Kashmir analysts predict that the BJP may be looking at the possibility of an alliance with another local player, National Conference (NC).

Over the years, it has become clear that for a permanent solution to Kashmir, New Delhi will have to build a political culture beyond both PDP and NC. The PDP was created to offer a counter to the soft separatism peddled by the NC. But in the process, the PDP itself began to indulge in competitive secessionism. Since the 1950s, Kashmiri leaders have been adopting an anti-New Delhi approach in the state to win hearts. Despite best advice that this needs to be discouraged, the BJP went ahead and forged an alliance with the PDP in 2015. Now would be a good time to send a clear message, if Shah is serious about sorting out the mess in Kashmir: only those whose heart beats for India will be nurtured and protected. These do not necessarily have to be only the ones who fight elections on a BJP ticket or dance in BJP rallies.

After the Pulwama suicide attack in February, the Centre has sent some strong signals in Kashmir with a crackdown on separatists. This includes its rekindled interest in old cases of terrorism, such as the killing of four Indian Air Force personnel by terrorists in 1990. But it is still seen by many as a temporary measure to absorb some of the tremors caused by the Pulwama attack. Whether this crackdown will continue remains to be seen and will prove to be the real test of Modi Government’s intent.

In the longer run, elimination of terrorism cannot only happen through the elimination of terrorists. It also must be followed by real action against the radicalisation factory in Kashmir: Jihadi preachers spewing venom against the idea of India and luring young men into the folds of militancy. Funding channels for such activities are still active and remains a big challenge for security forces.


Shah has had several meetings with Kashmir players, including one with the state governor and the head of the Intelligence Bureau. For a permanent solution to Kashmir, New Delhi will have to build a political culture beyond both PDP and NC

While looking at Kashmir, the new Government must not lose sight of the increasing radicalisation of Muslim youth in south India. So far, the Islamic State has limited influence in South Asia. But most of the handful of men who have joined IS are from the south. According to security analysts, IS has begun to focus on India as it sees potential of expansion here.

That IS could carry out a deadly attack in the neighbouring Sri Lanka in April, killing over 250 people, indicates that it is closer than we would like to believe. Studies by agencies have revealed that IS’ focus on social media and its sophisticated capability for propaganda (including in local languages) could only mean that their reach and influence in India (and elsewhere in South Asia) is only set to increase.

To the credit of intelligence agencies, it was India that had sent multiple warnings to Sri Lanka about the impending attack, including a phone call just an hour before the attack. But it failed to act on information provided by India. It is because of such enhanced capability in the last few years that India has not faced a major terrorist attack in the form of bomb blasts that were occurring so frequently when the Congress was in power. In fact, the agencies had prior information of the terrorist group

Jaish-e-Mohammed planning another Pulwama-type attack in Kashmir or elsewhere in a city like Delhi during Ramzan. That has been clearly avoided, though a thorough investigation must be launched into failure in avoiding Pulwama.

In central and east India, the Maoist insurgency, once called India’s biggest internal security threat by former Prime Minister Manmohan Singh, is on a decline. Most of the leaders of the CPI (Maoist) have been killed or arrested. Their last bastion now remains south Bastar.

In the last few years, Maoists have indulged in a killing spree of Adivasis on suspicion of them being police informers. This has resulted in the local population turning against them in several areas. Some of them are coming forward now, providing information to security forces about Maoists. But, even now, Maoists possess the capability to strike at security forces, especially through their expertise in improvised explosive devices. While the fighting capability of security forces through better- trained forces like COBRA has enhanced, the ordinary CRPF jawan, deployed in Maoist-affected areas, and state police forces, still have a long way to go. The Central paramilitary forces have for long been demanding that their own officers be allowed to grow and lead, instead of bringing IPS officers from outside. The new Home Minister must look into some of these grievances.

Towards the end, the realisation that internal security remains a police matter is extremely important. Last year, National Security Advisor Ajit Doval laid it clearly. Referring to increased used of technology in subversion, Doval called it the fourth- generation war and said “this is the war of a policeman and if you [police] win, the country wins and if you lose, then the country loses.” Keeping this in mind now would be a good time to seriously engage in the process of police reforms. Despite recommendations in favour of major police reforms since the early 70s, not much has moved in this regard. The directives to the Centre as well as state governments by the Supreme Court in the former IPS officer Prakash Singh’s case have so far not been acted upon.

As Amit Shah begins his work, it is time to realise that without these measures, hoping for a concrete internal security grid will only remain a utopia.