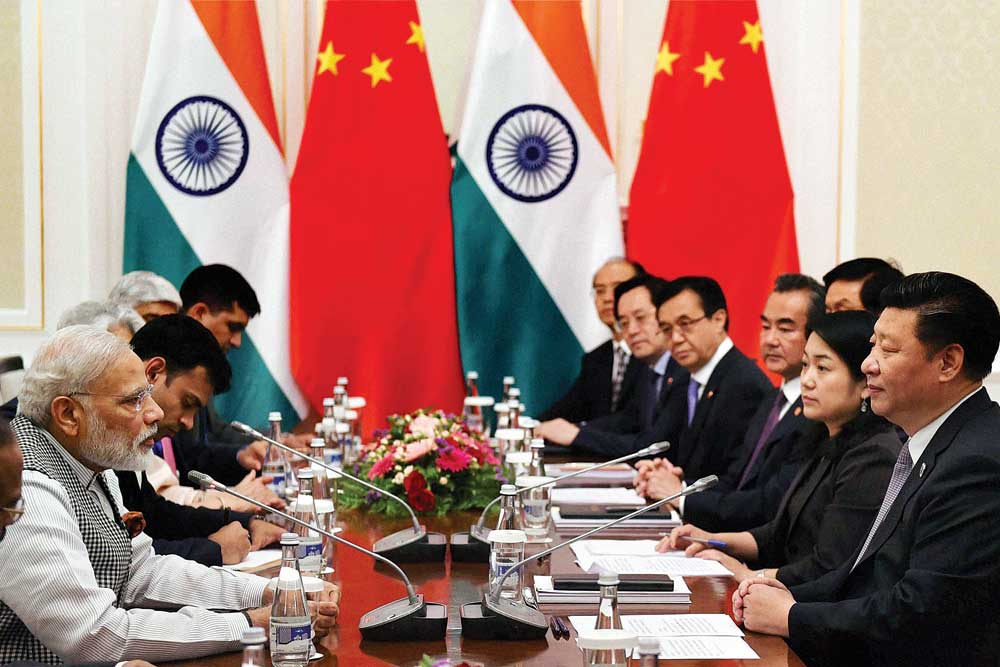 INDIA DIDN’T GAIN NSG membership last week. Does this constitute a failure? No and yes.

Why ‘no’? For starters, all is not lost. India will have other opportunities to enter the prestigious club that governs global nuclear commerce. Just a few days after the Seoul summit’s conclusion, reports emerged of a newly formed informal consultative group, led by outgoing NSG chair Rafael Grossi of Argentina, that will explore a potential membership process for non-NPT nations like India (Beijing, predictably enough, denied any knowledge of this new mechanism). Grossi has publicly expressed his support for Indian membership in the past. The NSG could well meet by year’s end to take up India’s case once again.

Additionally, from a nuclear trade standpoint, India doesn’t need NSG membership. In 2008, India earned a waiver from the NSG that permits it to engage in nuclear commerce even though it isn’t an NPT signatory. Currently, New Delhi is negotiating bilateral arrangements with three separate NSG states—Russia, France and the US— that could lead to the construction of nuclear reactors in India. There’s reason to believe the US and India will do all they can to finalise a deal with Westinghouse in the next few months, so that outgoing President Barack Obama can claim that the much-ballyhooed yet long-delayed Indo-US civil nuclear deal was operationalised on his watch.

To be sure, from a nuclear trade standpoint, NSG membership would be highly desirable for India. It would enable New Delhi to help set the rules on nuclear commerce, and to veto potential threats—such as a hypothetical revocation of the 2008 waiver—to its nuclear goals. Still, it is not essential.

Furthermore, from an energy standpoint, India doesn’t need NSG membership. It would be grossly inaccurate to claim that NSG membership is India’s ticket to energy security in a lower- carbon-footprint world, and that failing to secure membership jeopardises it. Yes, India has set an admirable—and ambitious— goal of sourcing 40 per cent of its power from non-fossil fuel sources by 2030, but only a third of this amount is to come from nuclear energy—and even that objective will be difficult to achieve. India’s current nuclear power generation capacity accounts for a mere 2 per cent of total installed power capacity, and for just 1 per cent of total energy production. It beggars belief that NSG membership would magically enable India to dramatically ramp up its nuclear power production—and particularly given other mitigating factors. In India, capital and other costs associated with nuclear energy are high. Meanwhile, anti-nuclear activists, impelled by the very real health and environmental risks associated with nuclear power production, remain influential and sometimes violent players.

All this said, India’s inability to gain NSG membership still represents a considerable failure. And that’s because New Delhi—at least for now—could not take advantage of a golden opportunity to add to its rising power credentials. Membership of one of the world’s most prestigious clubs would greatly enhance India’s global influence and its overall role on the world stage. In all likelihood, these geopolitical considerations, more so than those of nuclear commerce or energy security, prompted the Modi Government to launch such an intensive campaign to garner support for NSG membership.

India’s full-scale diplomatic offensive was actually quite successful—a large majority of the NSG’s 48-member states supported India’s accession—but its ultimate objective was not. Critically, New Delhi was once again stymied by its Chinese rival—the same rival that out-modernises India in the military sphere, and out-competes it in the race to secure precious energy and mineral assets worldwide.

FIRST, WHEN IT comes to international diplomacy, nothing comes easy. Aggressive lobbying and charm offensives, no matter how well conceived and implemented, often don’t succeed. This is an obvious point, but one that Prime Minister Narendra Modi may have overlooked, given the many success stories he’s authored in international relations—from his remarkable pariah-to-pop-star transformation in Washington, to his ability to obtain major goodies from deep-pocketed nations (witness the mammoth $75 billion infrastructure fund package he secured from the UAE last year).

This point is particularly worth belabouring at the moment, given that two of Modi’s most powerful backers on the world stage—President Obama and, unexpectedly, thanks to Brexit, British Prime Minister David Cameron—will soon be stepping down. The good news is that New Delhi’s overall global engagement over the last two years, greatly facilitated by Modi’s star power, provides India with a deep bench of international diplomatic support.

Still, deep repositories of support aren’t guaranteed to get you what you want, and particularly when powerful spoilers, such as Beijing, stand in the way. India earned buy-in from most NSG countries, but it wasn’t enough to get these countries—including the US—to get China to change its position.

A second lesson for India is that when trying to gain membership in major regional and global institutions, it pays to play by the rules. If India were an NPT signatory, Beijing and the few other holdouts against India’s NSG membership would have struggled to craft compelling cases to keep India out. Moreover, it may have joined the club years ago. This isn’t to say India needs to sign the NPT; China’s refusal to support India’s membership likely has more to do with geopolitics—not wanting New Delhi to be on an equal footing with Beijing in a key global institution—than with India’s non-NPT status. For all intents and purposes, if New Delhi ever enters the NSG, it would likely enter as a non-NPT signatory.

And yet, it won’t be as easy for India to join other organisations unless it plays strictly by the rules. Take trade policy. If India is to join the Asia-Pacific Economic Cooperation (APEC) group—an organisation that would enhance India’s regional profile in a big way—it’ll need to make the case that it will eschew positions that many countries have perceived as too protectionist, and which have triggered tensions (including with Washington) during global trade negotiations. Earlier this year, media reports—denied by New Delhi—suggested that negotiators for the Regional Comprehensive Economic Partnership (RCEP), a proposed pan-Asian trade accord and alternative to the Trans Pacific Partnership (TPP), were threatening to eject India from talks because of overly protectionist positions.

Third, India’s membership in other global institutions offers plentiful opportunities to project global clout—including in ways that could positively influence its NSG prospects. Admittedly, the chief prize—a permanent seat on the UN Security Council—remains out of reach for the foreseeable future, while several prominent institutional platforms to which India does belong, like BRICS, have admittedly lost some of their mojo. Still, some of India’s less prestigious global institutional memberships confer considerable advantages.

Deep repositories of support aren’t guaranteed to get you what you want, and particularly when powerful spoilers, such as Beijing, stand in the way

Consider that India is the second-largest contributor to the new Asian Infrastructure Investment Bank (AIIB), affording New Delhi an excellent opportunity to leverage its economic clout. And the timing couldn’t be better. With Brexit likely to send Europe’s economies into a tailspin, the region’s international donors could find themselves financially strapped. India, through AIIB, could help fill the vacuum and offer itself up as a trusted investor to developing world customers. Then there’s the Shanghai Cooperation Organization (SCO), which India joined only recently. Membership provides India with a stronger foothold in Central Asia, a region to which India has long sought access. Indeed, SCO membership, coupled with the new Chabahar transport corridor project, offers India unprecedented access to one of the world’s most strategic and energy- rich regions. Both AIIB and SCO, it should be noted, also count China as members—giving India opportunities to cultivate goodwill with Beijing in multilateral settings, thereby raising the possibility that China could soften its position on Indian NSG membership.

Consider as well India’s recent entry into the Missile Technology Control Regime (MTCR). MTCR membership can strengthen India’s case for NSG membership in two ways. First, by joining MTCR, which aims to curtail the proliferation of missiles and other forms of unmanned technology that can be used as advanced weaponry, India brings attention to its already-strong broader proliferation record. Additionally, India can use MTCR as a bargaining chip with China, which is not an MTCR member. New Delhi could conceivably strike a deal with Beijing in which it assures support for Chinese membership in MTCR if Beijing agrees to support Indian membership in NSG.

Despite opposition from several BJP officials who regard NSG membership as unnecessary, the Indian Government is likely to keep trying to get in. New Delhi will continue to make a case for being a responsible global actor with an impeccable proliferation record, and hope for one of three positive outcomes: gaining the support of all NSG members but China, thereby making Beijing feel sufficiently cornered that it grudgingly gives its approval; striking some form of deal directly with China that leads it to relent; or, perhaps most likely, getting the NSG to agree to hold discussions about how to handle membership applications from non-NPT nations, clearing the path for India to join the group in due course. The recent formation of the Grossi-led initiative makes this last scenario all the more realistic.

Getting the NSG to a ‘yes’ on the issue of India’s membership won’t be easy, but New Delhi can help its cause by taking two additional steps. First, it should refrain from any retaliatory actions, such as engaging in delaying tactics that could jeopardise the ratification of the Paris climate agreement (India has already threatened obliquely to do so). Petulance doesn’t score you points in international diplomacy.

Second, India should pledge to be more responsive to concerns surrounding its nuclear safety record—a blemish in an otherwise strong proliferation record. This year’s Nuclear Security Index, put out by the Nuclear Threat Initiative, gives India an overall score of 46 out of 100—barely higher than Pakistan’s. The NTI’s main worry is India’s lack of an independent regulatory agency for nuclear-related matters. Significantly, researchers have flagged several cases of questionable nuclear oversight, including one from 2014 when authorities failed to realise that a top official at Madras Atomic Power Station, who shot and killed three people, was suffering from failing mental health. Analysts have pointed to other nuclear safety concerns in India as well, including cases of stolen uranium.

These are not small matters, and yet Indian officials often downplay or dismiss such concerns. Addressing them, or at least acknowledging them, both in private discussions with NSG members and in more public settings, would indicate India’s willingness to be responsible and transparent, and therefore make a good impression on NSG states. In effect, it would be smart policy for an Indian government that appears dead set on gaining NSG membership, no matter how long it takes.