Not just another day for a photographer 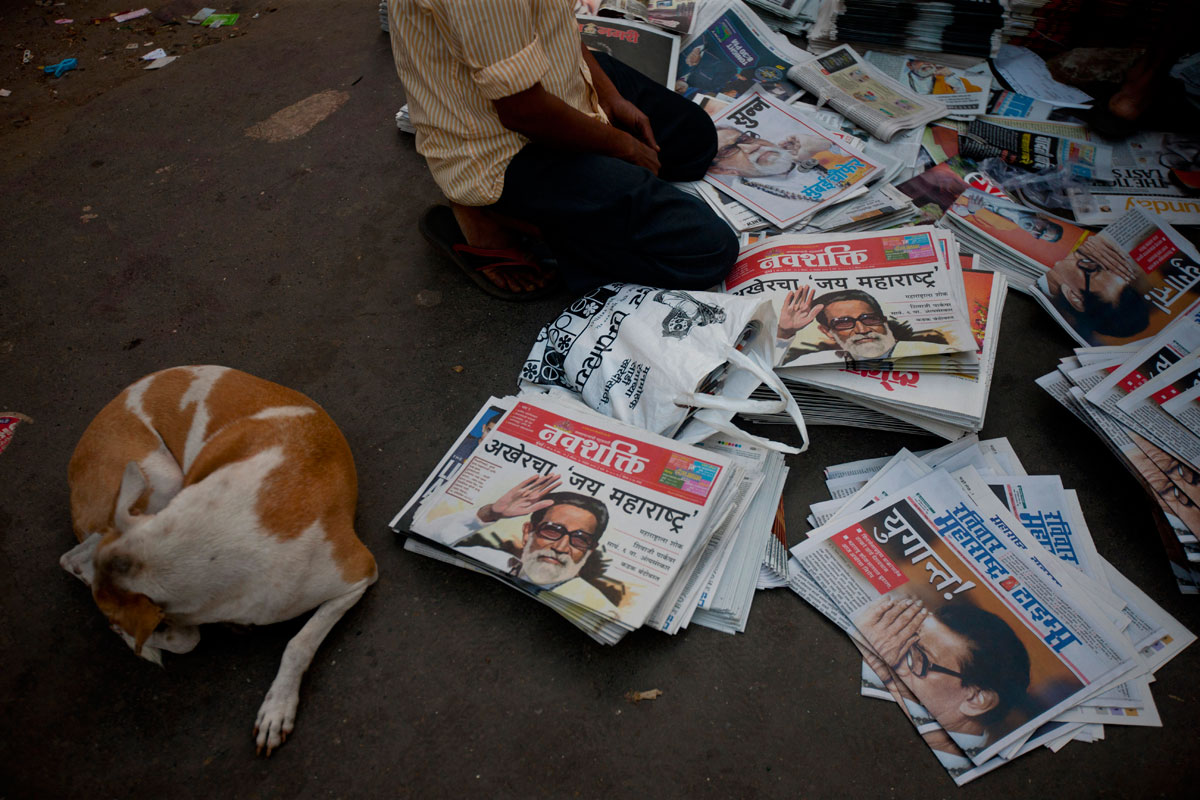 
In the last of week of September, while I was munching away in my hotel room at the Polo Towers in Shillong, I received a typo filled sms from a colleague. “We nid you today, cud have done with 1 more person, are you abck tomorrow?’’ The Hindustan Times photo team in Mumbai had endured a double drubbing in the form of Ganesh Visarjan and the Indian Cricket Team’s World T20 Victory Parade. My answer was a simple ‘No’.

When I got back, we discussed on how stressful their week was. One guy said, this was nothing compared to what would happen if Bal Thackeray were to die. Unanimously, we thought, whether he dies next year or a decade later, we wished for him to die at home, peacefully, asleep. Secretly, I wished to be tucked away on some assignment out of Bombay if and when such a thing would happen.

That, however didn’t happen.

On saturday evening, my uncle wanted to go back home to Nashik, he was visiting us for a day. Travel agents told us that interstate buses aren’t working, so the only option was a train. But how does one get to a train station. He and I stood in the middle of the street and were forcibly stopping ricks, but the Vettels that they are, they’d either turn away or speed up scaring us off. Frustrated, he took a lift from a stranger and found his way home somehow.

My pho-joe (photo journalist) friends decided that 6 am was the time to take position, be it Matoshree (Thackeray’s residence), Sena Bhavan, Shivaji Park or any place between Dadar and Bandra. Given that sunrise happens at around 6.45 am, it seemed pointless to be there at 6 am. But I chose to go along. My disinterest in covering this giant PR exercise ensured a delay and I left home only at 6.30 am, armed with egg sandwiches and a day long supply of dry fruits.

The city is beautiful when it is as sparsely populated as it was on Sunday morning. You notice details and experience new things. Things that you won’t find in lists of 20 must-do things when in Bombay. One such experience was being able to witness the gradual sunrise from a local train’s second class compartment without being pushed around.

If the rest of Bombay was deserted, Dadar wasn’t. It seemed geared for a mini-election, with the winner declared before a single ballot was cast. Hoardings, hoardings and more hoardings. Not a chai shop in sight. In the park opposite Plaza Cinema, a few police constables slept. Some of them had fallen asleep seated on park benches, with their necks threatening to greet their knees. Some nodded off inside the watchman’s cabin, and one constable found a sweet spot between the cabin and the gate. They all slept clutching their lathis, which looked funny on several levels.

I made calls to check where my friends were. One was already in the ‘press box’ at the cremation site since 6 am. One was at a vantage point in a high rise opposite Shivaji Park since, yes, 6am. But they were all beaten by Vasant Prabhu, the 26/11 daredevil, who was high up in a building opposite Sena Bhavan since 5 am. Everyone seemed to be on time, except me. I chose to hang with Prabhu, and found my way to the 5th floor of the under-construction Kohinoor Arcade, a commercial tower owned by Manohar Joshi.

There were about 15 pho-joes there, including Prabhu. One of them asked aloud if anyone was on whatsapp. I gave him my number. A few seconds later I received a blurry cell phone photo of a man in a casket draped in saffron. Bal Thackeray’s first sighting after he passed away was on my phone. Everyone bunched together to see and the guy who wanted someone with whatsapp joked, “Mummy sarkha distoye (looks like a mummy).” Everyone laughed and the laughter was cut short when a female photojournalist who had gone down to fetch nourishment arrived with a giant jug of tea and plastic cups.

Nothing the Sena does ever starts on time. So we had time to kill, lots of it. An AP photographer joked that property rates in Shivaji Park will nosedive now. Not only will residents have to put up with the Dussehra rally and Ambedkar’s birth anniversary, but now Bal-T’s memorial day as well. In future, their Diwalis will surely be doubly explosive.

A few safety nets around the building kept appearing in my test shots. I told one of the guys I was going for a leak, and started climbing the staircase of the building looking for a clear shot. I found it half an hour later on the 35th floor. It offered me a beautiful view of the Bandra-Worli  Sea Link, aglow in the morning light. Gingerly, clutching a pillar, I looked down to see what the other pho-joes were up to. They were diving into a bagful of vada-pavs.

I made a few calls to photographers who were walking along with the procession since it left Matoshree. The cortege was still at Mahim Causeway. I emptied my bag, tied each camera strap to my wrist, spread out my bandanna over the bag which was now my pillow and slept for the next hour and a half on the freshly dried, cool concrete floor, till I was woken up by the sound of a helicopter hovering above Shivaji Park.

The crowds were filing in now, small men casting long shadows that reminded me of Vincent Laforet’s aerial photographs of skaters in New York City. I shot some photos on my phone, instagrammed and tweeted those. In a few minutes they went viral. My caption for one picture was ‘This is Not Tahrir Square’, the sarcasm was missed but the photo was widely retweeted.

It got boring after a while and to keep myself awake I ran a few laps on the 35th floor. My four sandwiches were over too, and I had no water and very thin network to keep me entertained. To the Sena’s credit every five seconds they were making announcements on the PA system asking the supporters to maintain law and order.

When the chief’s body was brought in, I had two labourers for company. They picked up two Ciforex blocks, placed them on the edge where I was and sat to see the show. My sister, who was watching closely on TV, texted to ask me if I had found a safe place. With no boundary wall or glass in front of me, I typed, “yes”.

My vigil at Kohinoor ended around 3.30 pm. During the long walk down, I had time to reflect on what we had just witnessed. The forced shutdown of a city, state honours for a divisive, Hitler-loving man, and the unseen tears of the national flag. It made the three-minute walk from the building to the press box at Shivaji Park seem endless.

The press box was a mess. There was no place to stand or photograph. I climbed up the PA system and photographed the rest of the evening. Someone from the crowd, a Shiv Sainik, climbed up too, and the cops shouted him down. He wouldn’t listen, so a constable whacked him on his head. The crowd howled at the constable. His superior intervened, saying, “Naveen aahe, naveen, tyaana maahit nahin (he’s new, he doesn’t know how things work here).” The constable apologized to the crowd and the Sainik stood inside the press box, taking photos with his phone. Towards the end, while the funeral pyre burnt, a cutout of Bal-T began floating around the crowd. A surreal sight, it seemed like a statement that he’s never going to leave.

On my way back home around seven, while my friends were resting their backs against closed shutters and filing their pictures, I decided to check on my father, a 78-year-old man who witnessed almost everything in this city since he crossed over from Sindh, Pakistan, as a 13-year-old. He was seated on a bench outside Diva Maharastracha, a prominent Marathi food restaurant not very far from Shivaji Park. He’s given up on TV, for the right reasons, and hadn’t tuned in to the news on the radio today, for equally right reasons. He asked me how it was.

I told him he got state honours and his face sank, and it felt like the bench was about to swallow him. For the next 10 minutes we sat silent. Not a word was exchanged. A group of bikers with Sena flags sped through the street, a newly married couple was out taking a walk and a Nepali was requesting someone on the phone to save him some rice when he got back. It seemed like the city had just woken up. My dad got up and we walked to his house, slowly, a walk laden with disappointment. As I was about to leave, he asked, still unsure if I had told him correctly, “they gave him a gun salute?”