They train as hard as commandos, to work with special forces around the world 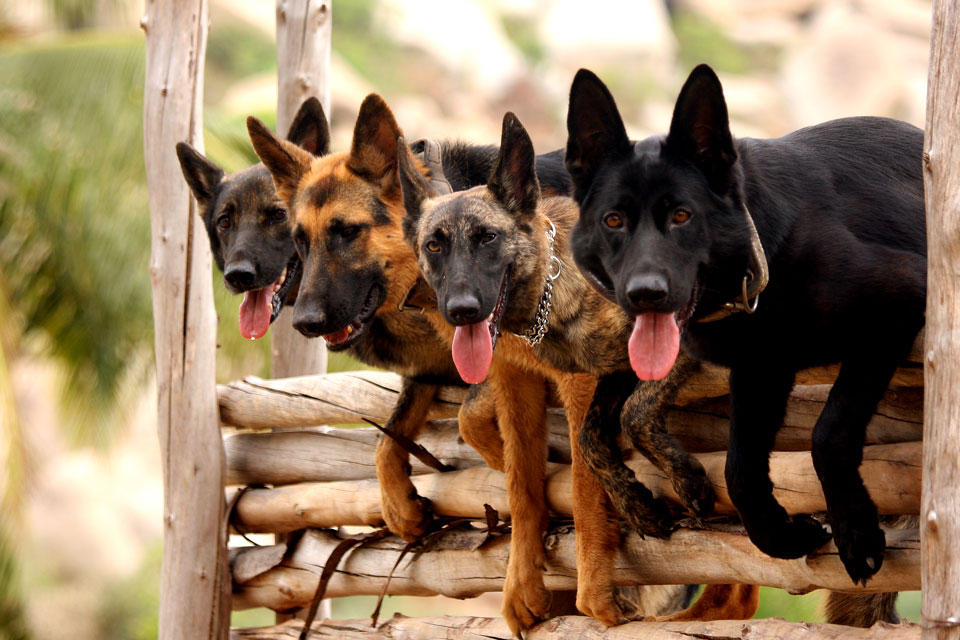 These dogs are being trained to sniff out narcotics and explosives, attack, bite, pin down, even stop a terrorist in his tracks.


At the handler’s command, the lean, mean wolfish-looking dog leaps after an armed man sprinting 200 metres away into the dense jungle. Within seconds, the dog has forced him to the ground and is sinking its teeth into his wrist. As the man writhes, the handler arrives with police and arrests him.

“Good, Devil,” he pats it and leashes it. “Are you okay?” he asks the fellow handler who doubled up as a decoy. “Yeah,” he grimaces, as he gets back on his feet, sweating inside the body suit without which the dog would have mauled him alive.

Devil, the seven-month-old Belgian shepherd, is among the chosen eight being trained for Special Weapon and Tactics (SWAT) teams in the US and Europe. These dogs are being trained to sniff out narcotics and explosives, attack, bite, pin down, even stop a terrorist in his tracks. Commonly known as Malinois, they are stress-resistant and favourites of special forces and secret services such as Mossad. About 100 km north of Bangalore, WolfgreyK9 is breeding and training Belgian shepherds at its 20-acre facility replete with physical barriers, parked vehicles and other paraphernalia simulating real-life situations.

“These Malinois are being trained in various roles like assault, scent and track,’’ says Ahmed, who heads WolfgreyK9, which plans to train dogs for police and special forces across the world. Ahmed says if his dogs were sent in to tackle the terrorists on 26/11, they would have rendered them immobile with minimum collateral damage or loss of life to police or NSG personnel.

But they come at a price. Each dog costs as much as a couple of Maruti Dzires. “The dogs can even be trained to drop explosives and come back,” says Ahmed. They can plant microphones or GPS devices on cars, difficult for humans as they can be easily spotted. They can also act as the eyes for the situation commander.

Balaji Venkataraman, a partner, says it all started when they needed guard dogs for their coffee estate. An ex-trainer with the police taught their dogs to “stay, sit, roll, sleep and shake hand”. So Venkataraman, a techie, decided to search a little more and met Dr Andre Vandergeten.

Vandergeten has been training dogs for special forces for the past 55 years. At age seven, he was introduced to Malinois by his grandfather. At 13, he trained his first and swears Malinois are the best working dogs. These dogs look like German shepherds, but are leaner and healthier. They need to be trained for 15-20 months and have an active working life of 7-8 years, says Vandergeten.

The shepherds are now also being trained in cat-like agility. They jump off step ladders, climb them and on reaching the top, turn around neatly and climb down. They jump over parked vehicles, even walk the thin lifeline thrown high over the ground. But most unforgettable of all is one dog, who on spotting a decoy who has hijacked a bus full of passengers, lunges through the window and in one swift motion sinks his jaw into the terrorist’s wrist, neutralising him.

“Each dog is given a balanced diet. We also administer the necessary vaccines,” says veterinarian Dr Sunil Mathad. The grind begins, when the pups are 5-6 weeks old, with obedience training. “The dogs need to be exposed to different environments and our primary goal is to turn them into active thinking dogs,” says Ahmed.

Vandergeten has teamed up with WolfgreyK9 and plans to market these trained dogs abroad. “When I looked at the facility and the people behind it about a year ago, I was very impressed.”

WolfgreyK9 also offer dogs for personal protection as pets. Malinois are stable around children or in a crowd and act only if the situation demands, says Venkataraman. Tijji Thomas, who bought one recently, says Bingo is part of his family, and protects them zealously. The damages: about the cost of a Nano.