Who Needs an ATM Card? 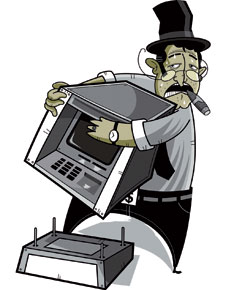 
On the night of 10 August in Bangalore, a couple of state electricity distribution company employees on night duty tried to sleep in their mosquito-infested office. Their compromised rest was further disturbed by some noise from next door—that of a heavy metal object being pushed. Curious, one of them popped his head out and saw to his shock that four men, their faces covered in hoods, were trying to push an ATM machine into a getaway jeep that had drawn parallel to the kiosk. Shouts of the electricity company employees alerted the thieves, who started their jeep. As the vehicle swerved, the ATM machine fell on the asphalt. This was the fifth such attempt this month in Bangalore and the eighteenth robbery attempted on an ATM this year in the city. Like in the earlier cases, the culprits have not been found.

The methods of robbers trying to violate ATMs have been ingenious. They have tried cutting through the walls or cables of the ATM with portable gas cutters. They have assaulted security personnel. And they have tried moving the mountain itself. There was Rs 25 lakh in the last machine they tried to steal.

Police claim to have clues about the robbers, but haven’t traced them yet. They are blaming banks for not employing security guards at kiosks, especially those in the suburbs, and for not installing powerful CCTV cameras. Vijay Kumar, a chest manager at a public sector bank, says attempts to carry off ATMs have been made even in the heart of the city. Merely appointing more guards or CCTVs is not the answer to the crisis.

A Crime Branch officer says, “In earlier cases, we arrested seven people. They were inside jobs by those who worked as securitymen for cash-filling agencies. Thieves who carry away ATMs seem to be professionals as they cover their heads and do not care about the CCTV cameras.’’